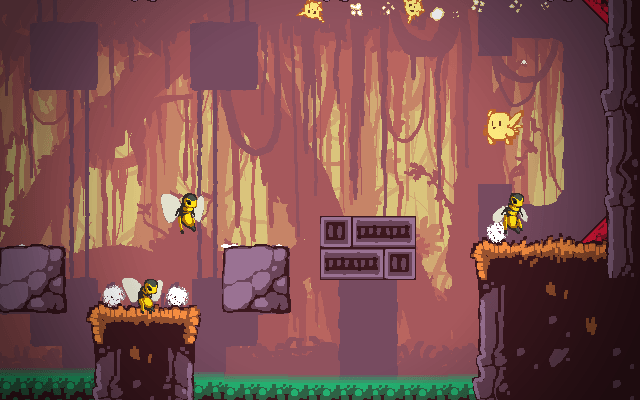 Throw those forest babies for a good time in Offspring Fling

Kyle Pulver is a bit of an indie gaming legend. If you haven’t already, you need to download depict1 and Bonesaw: The Game, both platforming games that highlight the gloriousness of his work. He is a developer who clearly, deeply, madly cares about his output, and the sort of developer who should be fixed firmly on your radar.

His latest game, Offspring Fling, is special in that it’s the first paid game from the developer, his previous work having all been free-to-download. It’s also insanely cute and well-designed, with a serious puzzle edge that will easily fix that itch you’ve been looking to scratch.

You are a Kirby-like forest creature that has lost all of its children, thanks to a nasty monster thing. Over 100 puzzle-platforming levels, you need to grab all your kids and take them through the exit door to win.

This is done through standard platforming action, coupled with a pick-up and throw mechanic. Our heroine can grab any child and carry them all over the level – however, when you’re holding children, you can’t jump as high, making some jumps impossible. In fact, the more children you’re holding at any one time, the smaller your jump will be.

Fortunately, you’re able to both drop children on the spot, and lob them in a horizontal direction. In this way, you can throw your kids through gaps and to safety, or across pits of acid, or over the heads of nasty forest creatures who are looking for a tasty snack. As long as you get all your kids to the exit door, it doesn’t matter how you do it. 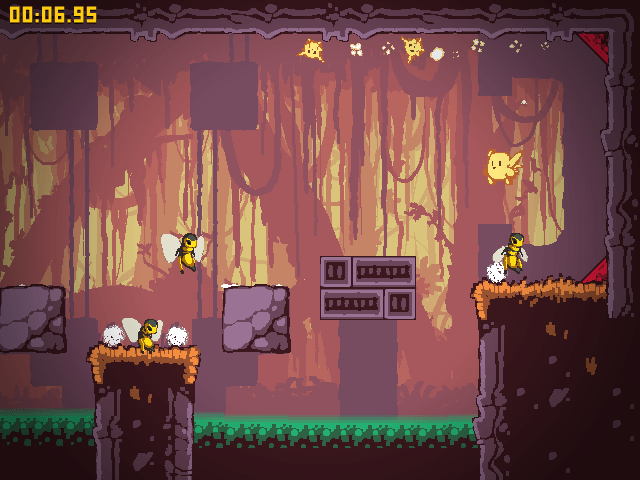 This core concept is expanded on regularly, with some brilliantly clever ideas on show. You can’t crawl through smaller gaps when you’re carrying children; you can throw children at buttons to push them from a distance; you can throw children at enemies to confuse them for a while; you can stack children on your head to push buttons on the ceiling; there are so many slick concepts, that you’ll still be seeing new ideas towards the end of the game.

Once you’ve worked out how a level works, you can then try to beat the gold and developer time trials. Normally we wouldn’t be huge fans of time trials, but Offspring Fling comes with ghosts of your former attempts and the speedy times you’re trying to beat, so it feels like you’re actually racing against someone, rather than simply trying a level over and over on your lonesome.

Pulver’s unique art style is here and present for all to see, giving the game that added oomph of personality. It’s a pleasant mixture of cute, colourful and rough, with bright environments over the top of shadowy backdrops, matching the content of the game beautifully. 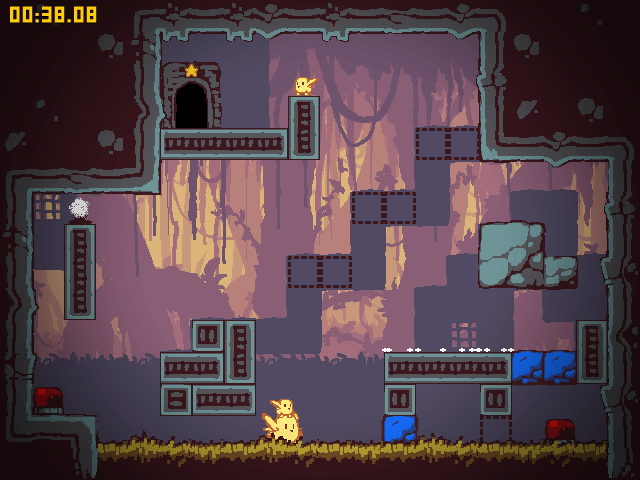 While we thoroughly enjoyed Offspring Fling, our attention began to wane around halfway through the game. The level design matches the puzzles well, and it all builds up in a satisfying way, yet there aren’t really any memorable levels to talk of, and we didn’t have as many “ahh that’s how you do it!” moments as we would have liked.

In fact, if we’re being honest, towards the end of the game it all became a bit of a bore, and we were definitely ready to move on to something else. It feels wrong to say a bad word against what is a lovingly-crafted game that really doesn’t do much wrong, but it’s definitely missing that special something – a certain magic touch.

That doesn’t make Offspring Fling any less essential, however, as we were having an absolute blast up to that point. If you’re a fan of puzzles, platforms and general cute-overload, this is a game that should be in your possession.