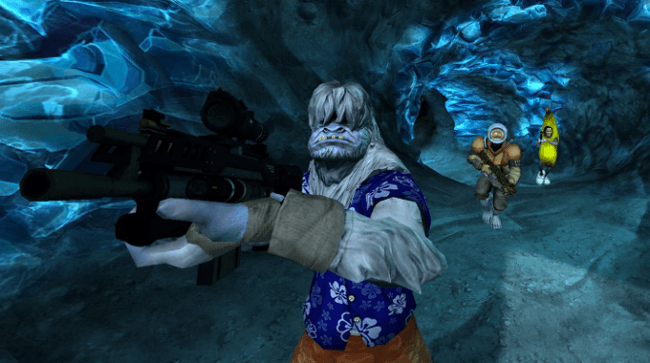 Offensive Combat may be irreverent, but it may also be the best browser-based FPS yet.

The first thing you have to know about Offensive Combat is that its title is a deliberate play on words. Oh, sure, there are plenty of offensive tactics involved in the strategic sense, but the real joke is that Offensive Combat announces kills with cries of “Bam! Suck it!” and rewards offensive behavior like “teabagging” slain players. If any of that ruffled your feathers, then trust me: Offensive Combat isn’t for you.

But if you’re the sort of player who’s willing to take it in the spirit of humor for which it’s intended, you’ll find an uncommonly rewarding browser-based shooter that provides almost as good of an experience as its console counterparts.

Even better, it’s free and you can access it from your Facebook or Twitter accounts. Like so many free-to-play shooters, it lets you spend real cash on weapons and boosts, although in its favor it allows for plenty of opportunities to buy them through piles of in-game currency as well. Even the in-game advertising is kept to a minimum, featured as it is on a digital domed scoreboard (Hunger Games style) that you might not even notice.

But in this case, free doesn’t mean inferior. Offensive Combat sports as robust an experience as any big-name shooter aside from the lack of a campaign, whether in its multiple gameplay modes, its smart-but-concise talent trees, or in extensive combat options that allow for two guns and a melee weapon. Consumables, such as one that marks a player who killed you, encourage fun in-match vendettas. Few gameplay styles are out of the question, as the skills themselves can be rigged to result in everything from Marcus Fenix-style heavy hitters or stealthy assassins. A number of the developers worked on genre hits like the Call of Duty franchise as well, and this experience shows up in Offensive Combat‘s keen knowledge of what works and its unceasing sense of fun.

Still, all in all, it’s fairly generic shooter stuff that yields few real gameplay surprises, but that design fits well with its obvious intentions of letting FPS fans enjoy their favorite genre when they’re away from their Xboxes or gaming computers. Its unique charms instead lie in its visual presentation. The levels themselves radiate with beauty seldom—if ever—seen in a browser-based shooter, with settings running the gamut from ramshackle ghettoes to suburban neighborhoods at Christmas.

The cosmetic options for the players themselves benefit from cheeky designs, whether it’s an option to morph your arms into tentacles or the way it lets you switch out your headgear with the famous “trollface” of 4chan fame. And then there are the “pwns,” the complicated (and offensive) victory animations for killing enemy players that also delay their respawn time. Pwns take a while to pull off and you can’t interrupt them, but it’s fun to try them anyway for their humor and the decent rewards you get from seeing them to their conclusion. And the most amazing thing? Somehow, in spite of all this unabashed snark, Offensive Combat manages to have the best community I’ve seen in a shooter in ages.

If there’s a problem, it’s that I witnessed some mild lag after spawning in the first few minutes of a round, and this while playing on an Alienware M11x with a speedy connection. That seems more of a problem with the entire concept of a browser shooter, though, and merely notching down the graphics a tad helped with the performance. The skills, too, favor veteran players, such as a high-level skill that keeps you hidden on the mini-map even when you’re firing your weapon. Still, these are minor concerns in light of everyone sharing the same hit points and the fairly balanced gunplay, and Offensive Combat does a good job of keeping its players on a more or less equal playing field. If you’re at all interested in first person shooters, it’s a must play. It sets a massively high bar for browser-based games to come, and in its best moments, it hints at a coming age when external gaming rigs won’t even be necessary.