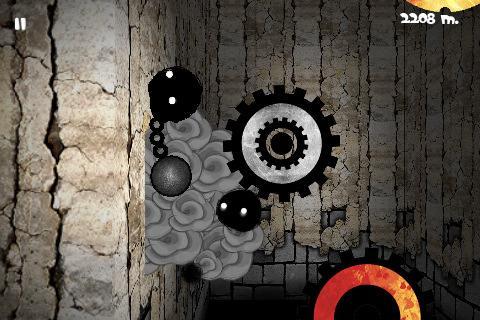 Being a cloud of soot must really be a drag. Looking all dark and ominous, gathering in chimneys and smokestacks, it’s a wonder a cloud of soot manages to get anything done. Not Oddy Smog though. He’s a soot cloud with a dream. Peering upwards, he sees white clouds frolicking in a bright blue sky – and he wants you to help him join them.

Oddy Smog’s Misadventure is the latest in what seems like a never-ending supply of survival games on the iTunes App Store. Unlike much of its competition, however, Oddy Smog requires a certain degree of skill and patience that isn’t found enough in the high score/survival genre. Players will guide Oddy upwards by way of an endless series of gears that make up the chimney’s interior. Constantly spinning, players will slingshot Oddy from gear to gear as he progresses up the chimney.

Since you won’t be controlling Oddy’s movement directly, Oddy Smog’s Misadventure can take a little getting used to in the controls department. Holding your thumb on the right side of the screen will keep Oddy held on to a gear, while releasing your thumb allows him to release his grip as well. Depending on the speed of the gear and the direction he was facing when released, the momentum should slingshot Oddy to the next gear that you can grip on with your right thumb. It’s a unique control scheme that feels a little weird at first, but feels deeply satisfying once mastered.

With the amount of challenge offered here, landing on the intended gear every single time would be an impossibility. Thankfully Oddy can survive for a moment or two on the chimney’s interior walls and has the ability to do jump once while in mid-air should you come within a stone’s throw of your intended target. Oddy will also want to keep an eye on the walls for other imprisoned soot clouds yearning to breathe free. Touching them casts away their shackles and earns you a score multiplier that will help your point total at the end of the game.

Like all good survival games, Oddy Smog’s Misadventure knows to step up the challenge the higher you climb. Different gears with different properties appear the higher you climb. Some move around the environment, for example, while others act as catapults or shake Oddy off after only a few seconds. A solid assortment of items will help climb to new heights despite increased challenges. All in all, Oddy Smog’s Misadventure is a well-polished survival game that no fan of the genre should skip.

The game even manages to impress with its personality. The visuals offer up a simple 3D presentation, giving the game a real sense of depth despite it’s truly 2D gameplay. The music, the art choices – the whole package feels like it was prepared by the best names in the indie gaming scene. Presentation here is a strong selling point, managing to impress just as much as the gameplay. 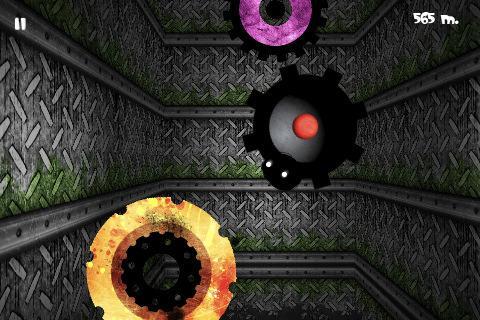 The only real complaint to be had here was the total lack of social elements. With no way to compare my score against others, or rack up achievements, Oddy Smog became an experience that – once I’d reached as high a score as I feel I could obtain – lacked the replay options found in so many of its contemporaries.

With so many survival games to choose from, it can be hard for a real gem to stand out on the App Store. If you’ve been waiting for that next original experience in the genre, you’ll be pleased as punch with what Oddy Smog’s Misadventure has to offer. The challenge might be a little tough for those new to survival games, though, so you may want to consider this one to work up to.