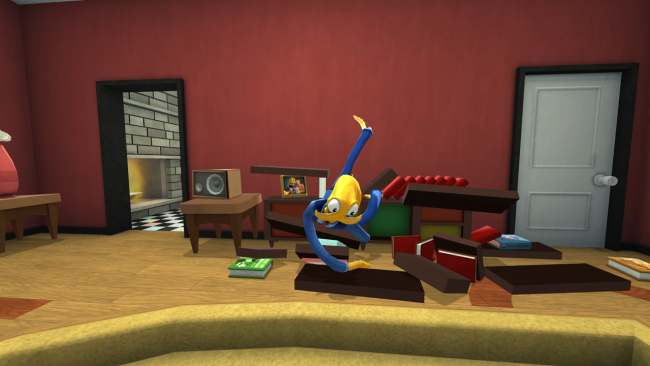 Suit up those tentacles!

I don’t really need 600+ words to explain why you need to play Octodad: Dadliest Catch, as this single paragraph will be more than enough: You play as an octopus dressed in a suit, who has a human wife and two human kids, and must complete everyday tasks without letting on that he’s an octopus. Oh, and you control each of his legs and arms separately, meaning that his cephalopod tentacles sprawl all over the place and make simple movements rather difficult.

If that description doesn’t already have you reaching for your wallet, then let me use my additional 550 words to tempt you even further. Octodad: Dadliest Catch isn’t just a one-trick pony, serving up a silly salad of jokes and nothing more – the way it couples the hilarity with the sorts of banal activities that may usually be seen as dull is sheer genius, and when you break into the second half of the game and experience some of Octodad’s more touching moments, it’s impossible not to fall in love with his big slimy face.

We join Octodad on his wedding day, and no one appears to realize that he is, well, an octopus in a suit. This is a running joke throughout the game – only one person, a dastardly chef, knows Octodad’s true identity, and goes to great lengths to attempt to unmask our tentacled hero.

The jokes continue when it comes to the game’s controls, too. You move Octodad’s legs separately, and his other tentacles fling around in the meantime, causing carnage and mayhem wherever he goes. He can also grab items with his “hands,” but it’s all purposely difficult to maneuver around, and highly hilarious throughout.

What makes Octodad even more special is that the jokes regularly ask you to do the most simplest of tasks – tasks that, for any regular human being, would be easy. Not so for an octopus in a suit. Whether it’s making your morning coffee, mowing the lawn, or nipping to the store for the weekly shop, Octodad makes the smallest jobs into large-scale wranglings, and it’s laugh-out-loud funny to see him attempting to grab some milk from the fridge under your control.

It makes it even more interesting when you use your sprawling tentacles to your advantage. At one point, for example, I was playing a simple game of air hockey at the arcade, and I was finding the going tough (I’m an octopus, remember). I accidentally flung one of my tentacles onto the tabletop, and suddenly it could act as a victory barrier. My AI opponent didn’t seem too pleased, but I was too busy laughing to care.

However, you can’t just spend the whole time flinging your arms around and letting items topple over all willy-nilly. If you cause too much of a ruckus in public, people will catch onto the fact that you’re an octopus and you’ll be exposed. Later into the game there are certain characters who can smell an octopus from a mile off, and these sections become a lot more stealth-like – albeit with ridiculous results.

But while Octodad is one of the funniest games you’ll play in a long while, it also takes an unexpected turn in the second half. I don’t want to spoil it for you, so I’ll simply say that it’s incredible how a game can make you care about an octopus. It also shows how powerful a story can be when done right. 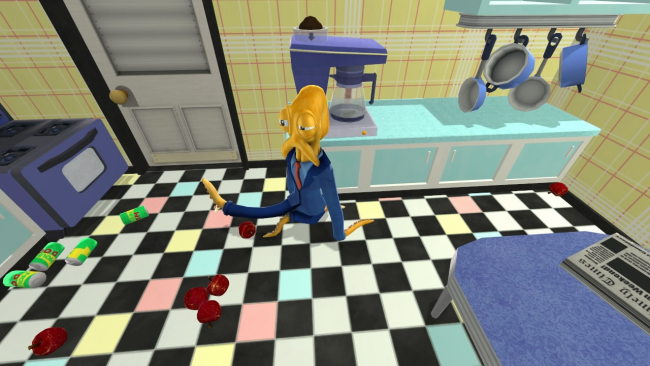 Note that Octodad can also be frustrating at times. The controls are funny, yes, but every now and again you just want to get through a certain door, or over a certain obstacle, or around a certain bend, and it’s all but impossible. At one point, I got a tentacle caught in a microwave door, and I had to waggle the controller for a full minute to get free. (I know that sounds utterly incredible and hilarious, and it is – but it’s still pretty irksome.)

The issue, really, is that when a game begins to move into the realm of “I just want to get here and the game isn’t letting me,” that’s when the fun becomes pain. There are a number of sections in Octodad when this happens, and I was definitely less of a fan of these bits.

Now let’s talk about the game’s length. I managed to blast my way through the game in around two and a half hours, which is going to prove a sticking point for some people. Here’s the thing: it really feels like the game is a great length, and it doesn’t outstay its welcome – any longer, and it may well have felt like the development team was stretching out the joke. Whether you think the price point matches the length is up to you, but I’d remind you that this is a game about an octopus in a suit. An octopus. In a suit. 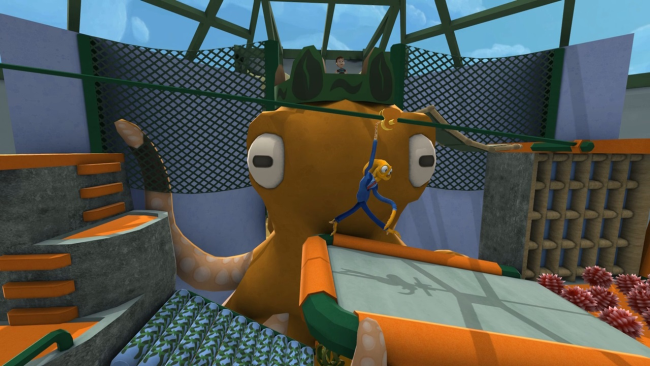 Plus, there is also the Steam Workshop available for downloading silly mods that users have made. I’ve already played a whole bunch of them, including the Super Octodad 64 mod, which allows you to play through the first level of Super Mario 64 as Octodad. See, I told you I didn’t need 650+ words.

Octodad: Dadliest Catch is charming, entertaining, riveting – all of the -ings, essentially. If you want to play something just that little bit different to anything you’ve experienced before, you owe it to yourself to grab this wonder (that is, if your tentacles will let you).