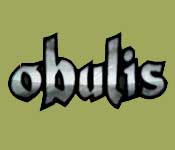 After years of cookie-cutter match-three, hidden object and time management titles, we’re confident that casual gaming fans are hungry for something different. Physics-based puzzler Obulis certainly fits the bill, challenging players to use height, positioning and momentum to bump varyingly-hued balls into pots, vases and cauldrons of similar color.

Curiously though, while unique and inventive, the lack of a cohesive storyline and consistent hint system, not to mention high overall difficulty level, render it more passing fancy than surefire desktop addiction.

Previously an acclaimed offering for smartphones and Pocket PCs, the outing plays simply and intuitively, as one might expect given the inherent limitations of its native platforms. (A fact which might explain why there’s no in-game help screen, typically a problem area, albeit not as much here given the title’s first few levels, which serve as an interactive tutorial).

Beating each of the game’s 150 stages – divided evenly between three chapters and chosen from a decent-looking, if unspectacular, campaign map – is accordingly straightforward. After picking which scenario to pursue next (freeform level selection is smartly offered, letting you non-linearly pick a path through the adventure, with multiple options opened with every triumph), the setup couldn’t be simpler. You merely left-click to select various devices such as ropes, chains and strings, then right-click to cut these triggers, causing attached objects to drop or swing into motion.

Challenge comes from the need to clear ledges/ramps of obstacles; deal with issues like moving platforms, balance beams or pesky holes; surmount barriers such as steep drops or floating lifts; utilize gadgets, e.g. cannons and slingshots; and ultimately find a way to generate enough motion where only stationary items at first exist.

What’s more, one’s aim has to be spot on, timing precise and strategic planning ultra-precise due to an increasing array of dilemmas such as oversized balls blocking the way forward or step-like outcroppings creating problematic bounce effects. And that’s before you even consider later impediments introduced on your journey that require the manipulation of multiple objects in tandem, leaving little time to think and scant margin for error. Thankfully, hitting “R” on your keyboard or clicking on “Retry Level” quickly resets any given board, letting you experiment with new tactics and approaches to your heart’s content.

To cut right to the chase, level design is fantastic. Available in a broad range of difficulty rankings (very easy, medium, very hard, etc.), vignettes range from short and simple to painstakingly trying, featuring layers of riddles to unravel.

Curiously, however, for everything the tale does right, the game’s not entirely without its faults. For example, you can’t play in windowed mode. Hitting escape won’t return you to the map screen. Solution reveals can’t be stopped mid-play, preventing you from getting pieces to the puzzle without spoiling the whole. Hints aren’t offered automatically or via solution sequences on harder levels, where needed most, making it possible to get stuck all too often.

More distressingly still, beating certain puzzles also demands flawless technique and split-second reflexes, which can throw you off, causing you to second-guess yourself even when you’ve discovered hard-won solutions. As such, many players will sadly never see much of what the title has to offer – which, of course, goes double when you consider the lack of any plot or underlying tale providing motivation for continued advancement.

A clever game geared most towards veteran puzzle-solvers, Obulis harkens back to nothing so much as the days of classic floppy disk outings. Unfortunately, many of today’s enthusiasts won’t possess the patience or perseverance to see the early-’90s-style epic through to its conclusion. Go in knowing there’s much to be enjoyed here, most of all a mega-catchy base play mechanic. But be aware, however: This is also the type of title that’s going to test your wits, sanity and willpower. Consider yourself duly forewarned…