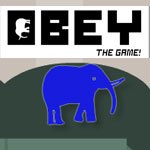 Despite never really attaining the heights of a Mario or a Sonic, the elephant has become something of a celebrity in the world of flash gaming. Appearing in other popular games this year like Achievement Unlocked and This is the Only Level, fans of charmingly intelligent flash games have learned to look forward to the popular pachyderm's inevitable next appearance. Fans of the elephant's hijinx won't be disappointed in Obey the Game, his final appearance in 2009 that sets him in a world of maddeningly quick mini-games with a twist; sometimes you need to obey the rules, and sometimes you don't.

Each mini-game in Obey the Game lasts only seconds, forcing the same sort of split second figuring out that you might find in Nintendo's WarioWare series. Like WarioWare, the instructions for each game are spelled right out on the screen. Words like “survive,” “romance” or “gather” lay out exactly what you need to do, leaving very little room for confusion. Everything is controlled by the directional keys (or WASD, your choice) usually requiring little more than a quick button press. If you're told to disobey “hide” for example, you'll just love your elephant out of the way of the falling box. If you're told “climb the stairs,” simply press left to get him to ascend the staircase on the left. The gameplay itself is embarrassingly simple. The catch, of course, is in whether or not to obey.

Each stage is going to give you one of two objectives: you either need to obey or disobey the instructions. By default, the game assumes you'll obey. When you need to disobey, it breaks this assumption and flashed a big “DISOBEY” on the screen at the start of the mini-game and turns the background red to remind you.

It's a very simple game on paper, but the speed of gameplay in Obey the Game is what's going to get you. A few dozen stages in and you're going to be tackling these things not in seconds but in fractions of seconds. It's downright maddening, but in that good addictive way that a flash game should be.

The core concept reminds me a lot of the trickery in puzzle games that spell colors using a color that doesn't correspond with the word. The word “blue,” for example, might be written in yellow, and the word yellow might be written in orange. Then the game would tell you to click either the word or the color yellow. It's an interesting concept, but one that never really had room to go anywhere beyond that initial idea. Leave it to Armor Games to take a simple concept and explode it into something awesome.

Once you feel you've got the knack of things, the developers have included a number of unlockable modes that help to put a different spin on the experience. Hidenride mode features two alternating levels over and over where you either hide or ride. Blind mode gives you a quick glimpse of the level before leaving you in the dark, reverse mode has you obeying disobey commands and vice versa, and Rapidfire has you playing the game without a quick micro-second breather between levels. Each of these modes are great twists on the gameplay you've learned in the normal mode, offering up unique challenges to test the skills you've already learned.

Armor Games has risen to the rank of royalty in the world of flash games, and after playing Obey the Game it's not hard to see why. Easy to learn, impossible to walk away from experiences like this are the pinnacle of old school flash design. Gamers looking to drive themselves mad for a few moments need look no further.