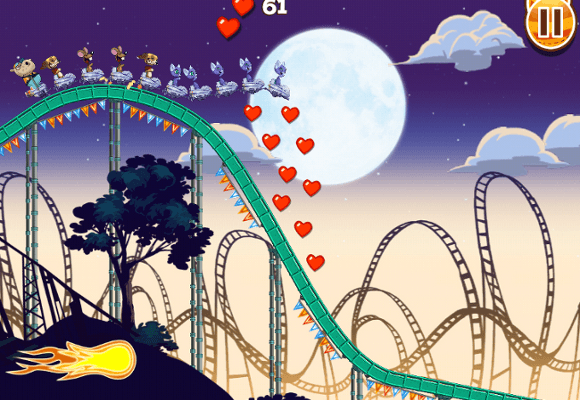 Looks can be deceiving.

Don’t let Nutty Fluffies‘ adorable visuals or goofy name fool you: it’s no easy game, and to expect otherwise would be a grave mistake. On the one hand, what else would you expect from Trials developer RedLynx? On the other, how on earth is a game about stuffed animals riding around in roller coasters so darn difficult?

Which isn’t to say its demanding nature is problematic. It defines the game as much as it enhances it, casting a fluffy middle finger towards the many physics-based platformers that have failed to truly challenge the player. If you’ve been disenchanted with the genre lately, consider this your welcome back gift.

Your primary goal in Nutty Fluffies is to safely deliver a group of stuffed animals from the beginning of a roller coaster to the end. Doing so requires a combination of quick thinking and finesse, as you’ll have to frequently swipe back and forth to speed up and slow down the coaster the animals are riding on. If you go too fast or slow down at an inappropriate time, you’ll likely lose a stuffed animal or two. Few things are more depressing than seeing an innocent cat plushie tumble off a roller coaster after a harsh landing. 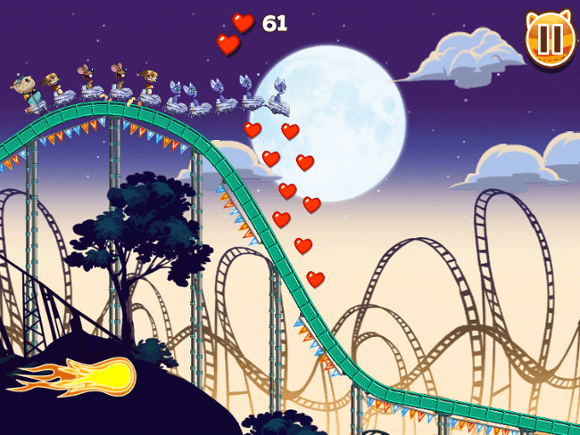 It’s also possible (and honestly, inevitable) to crash and have to start the level over, or to lose all of your animals before you reach the finish line. This is in part because the game’s physics are about as goofy as the stuffed animals themselves. They aren’t bad, necessarily, but they take some time to adjust to, and even then you’ll still end up flipping your coaster frequently. This is especially true when dealing with bigger jumps, as it’s extremely hard to correct things if you screw up midair.

Crazy jumps and quirky physics were the cause of many a death for me, but neither compared to the losses I suffered while trying to pick up the hearts scattered throughout each level. Sometimes they’re directly on the track and impossible to miss, but others force you to take deadly risks – like speeding up an incline when you should probably be going slower. It was devious, although the irony of dying from trying to collect hearts wasn’t lost on me.

It helps that you have multiple chances to grab all the hearts in a given level. Each new level is hidden behind a paywall and, barring just purchasing coins with real money, must be unlocked by either replaying levels for extra coinage or finishing one of the game’s many missions – such as finishing a level with 8 carts attached to your coaster. Missions are the quickest way to make money, but there aren’t quite enough of them to avoid replaying levels entirely. It felt like artificial padding to an extent, but the game adds a new cart to your coaster each time you replay a level (with a max of 10), which amps up the difficulty and influences the physics in some interesting ways.

And you probably thought the animals were just here for looks, huh? Not so! Each one has its own unique ability, all of which revolve around netting you additional hearts over the course of the level. The cat, for example, provides you with extra hearts whenever you’re going downhill, as well as 8 bonus hearts when you finish the level. This has little bearing on the gameplay, but it forces you to decide which animals are best for the level you’re playing. And just like the levels themselves, all but one of the stuffed animals will cost you coins. 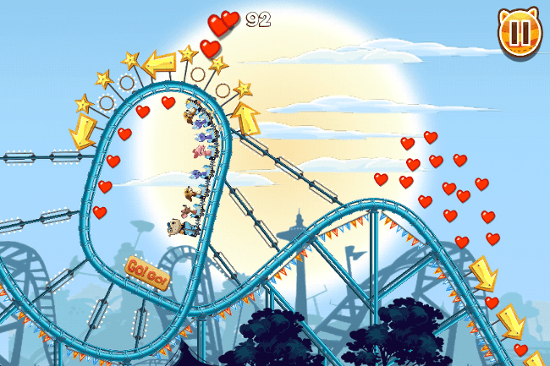 Arguably more useful than stuffed animals (but not as cute), though, are the carts with special powers you’ll unlock over the course of the game. That’s right: As if safely navigating a coaster through loops and massive inclines weren’t enough, you’ll also have to utilize carts capable of things like clearing gaps and magnetizing your coaster to the rails. These power-ups do a great job of mixing up the gameplay, though they aren’t used all that much.

With gameplay both difficult and satisfying, Nutty Fluffies has that just-one-more-time appeal that so many games in the mobile space strive for. It’s disappointing that you have to replay levels as often as you do, but it’s nowhere near enough to ruin the game. You’ll have a blast racing stuffed animals around on complex rollercoasters, and possibly feel compelled to dig out your teddy bear for old time’s sake.

Just try to resist the urge of taking him on a roller coaster.