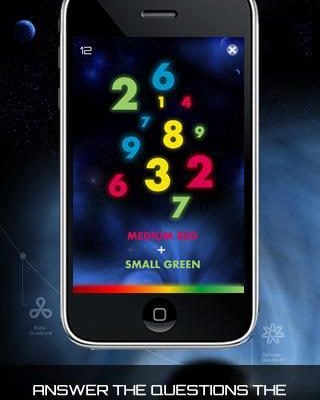 The goal of Numulus is to solve math problems as fast and as accurately as possible. Before you can do that however, you need to figure out what the problem even is first. Instead of just giving you two numbers to add or subtract Numulus gives you a color and size for each number and then you pick them out of a field of numbers. Once you’ve discerned which numbers you need you do the math quickly and type out the answer. Sound hard? Well… it kinda is, at first. 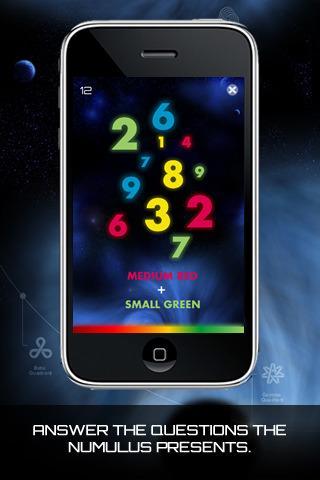 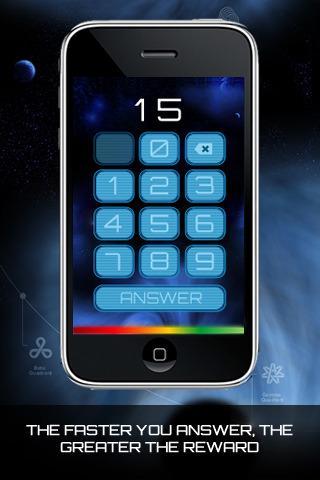 There are three numbers of each color on screen at any time, a large, medium and small sized number (physical size). So if the screen says Large Yellow + Small Blue you find the biggest yellow sized number and the smallest blue one. Tapping the screen brings up a numpad where you then type out your answer. If you’re right you get points and bonus time, and if you have time left you get a new problem.

I guess my biggest complaint about Numulus is the lack of variety. There are different difficulty modes that add more operations to the mix, and having to multiply and subtract definitely ramp up the challenge, but I still found myself wanting. I’d love to see some more modes, maybe something that has the numbers moving around the screen or mixed with letters, or maybe even more colors.

My other gripe is the layout of the numpad you to type your answers on. It’s the reverse of what you’re used to on a keyboard of calculator. Not sure why they went this route, but more than once I hit the wrong key because it wasn’t in the place I expected it to be. I’m hoping they’ll patch in a different layout, even if they let you choose which one you like from an options menu.

Overall I have to give it up for Numulus, it’s pretty hard these days to set yourself apart as a math game, but they found a way to do it. Having to deduce which numbers need to be added together before you can do the math adds an interesting wrinkle and will definitely serve to keep you on your toes. Fingers crossed for more game modes to give it some more variety.