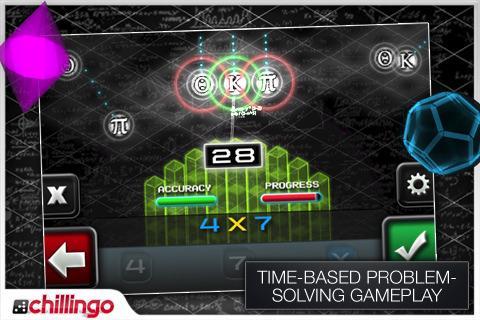 Numb3rs is the CBS crime dramedy that has made math not only seem sexy, but also capable of fighting crime. The show doesn’t seem like an ideal candidate for a video game, mainly because making math problems fun isn’t an easy task. That said, the Numb3rs game on the iPhone is surprisingly fast-paced and addictive, and it’s all the more impressive because it manages to make math enjoyable.

There’s a story here in Numb3rs, albeit a rather flimsy one. Effectively, players are the new math wiz on the show’s crime-solving team, and they have to solve math puzzles in order to solve crimes. In between levels, characters from the show pop up and talk to the players via still portraits and corresponding text. The dialogue is a bit ham-fisted at times, but it’s never really terrible… at worst it’s just kind of awkward to read. Thankfully, you can skip the cut scenes if you don’t care about the plot, or you can also just play the game’s Challenge Mode and bypass the storyline altogether.

The main gameplay consists of basic math brainteasers. Each level is composed of a grid that has symbols floating across it at various speeds. The goal is to select each of these targets and remove them by successfully solving a corresponding math equation. This gets pretty challenging in later levels which feature maps that are practically overrun by these symbols. In order to overcome this challenge, players have to select targets that are near other such items, thus allowing them to chain combos together and remove multiple symbols at once. There are three different ways to play each level: Normal, XYZ, and RPN.

In Normal mode, you simply have to put two numbers and a symbol together in order to reach the target number you’re given. XYZ, meanwhile, requires you to use three numbers and both symbols provided in the proper fashion. Finally, RPN changes the entire order of an equation; a symbol affects the two numbers to the left, so something like 3+2-1 would actually need to be assembled as 3 2 + 1 – in order to be considered correct. 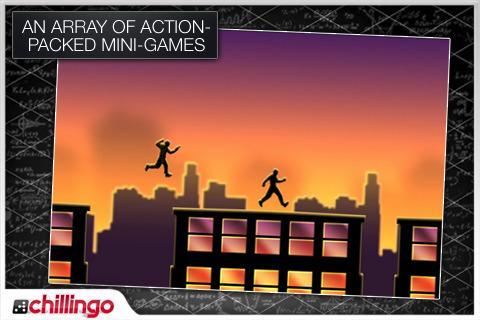 There are also a number of minigames that occasionally crop up between cases in order to break up the math game monotony. These can include rooftop chases (which are, essentially, tap-based platforming sequences), bomb diffusion (a throwback to the old Simon light game), and car chases. These are all competent enough, but they’re nothing to write home about. I enjoyed these minigames when they appeared, but I liked the math portions more.

Numb3rs is a solid, fast-paced, and – above all – fun little brainteaser game. While the other minigames are OK (at best), the core gameplay is a blast. If you like titles that force you to think, you could do a lot worse than this game, especially for $0.99.