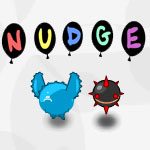 Nudge might look like he’s all big arms and brute strength, but deep down inside he’s just a monster with a kind-hearted soul. Nudge just wants to make sure the poor little balloon finds its way to the exit, and he’ll use his muscles to make sure that he can move any obstacles out of the balloons way. But he’ll need more than just muscles — he’ll need brains too.
Nudge is a box-pushing puzzle game cut from the same cloth as classics like Boxy Boy or Boxxle. Unlike its predecessors though, Nudge is less focused on manually pushing boxes and more on a unique design mechanic that has Nudge controlling a collection of boxes simply by moving in one direction or another. Move left, for example, and all the purple boxes will move left. Move down and all the green ones will move down. You’ll need to use this tactic to help open up pathways for the balloon and even push the balloon towards it’s goal.
Along the way you’ll face different challenges that help to keep the game fresh. Spiky balls that try to follow you and pop your balloon, or levels with several balloons all needing to find a home will occur here and there to really keep you on your toes. No two levels in Nudge ever feel too alike, which is a solid accomplishment for a flash game that spans 40 stages.
The gameplay itself is incredibly easy to pick up and understand. Moving in one of four directions and pushing things is pretty much fool-proof, but that’s not to say the game is without challenge. In constrast, Nudge gets very hard very quickly. Around stage 18 or 19 we found ourselves absolutely perplexed at some of the puzzles. This is a game that offers up a tremendous challenge for those who will take them time to solve each puzzle. If you’re impatient or easily frustrated, you should probably give Nudge a miss. Every step Nudge takes in the later levels is either a step towards perfection or total disaster causing you to restart the level.
Our only real complaint with Nudge was the crippling difficulty we encountered about halfway through. Thanks to Facebook Connect you’ll be able to sign into the CandyStand website with ease and save your progress, so you won’t have to resort to completing all 40 stages in one sitting. As well, if you’re really stuck you can find a link to video walkthroughs for every level built right into the game. It’s a nice touch, but it becomes all too tempting to click as the game goes on.
Asides from the aforementioned difficulty, we found Nudge to be a wonderful retread on an old genre that doesn’t get re-visited nearly often enough. Box-pushing games have always been great for head-scratching logic lovers, and it’s a delight to see it make its return in such a charming and well-designed web game.