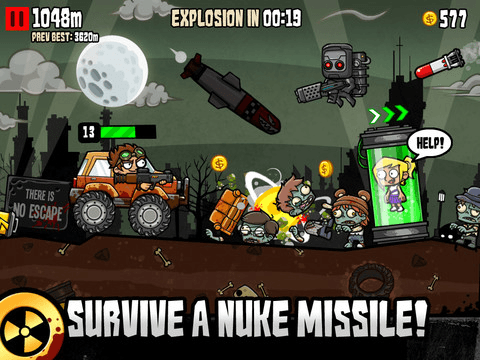 You can drive away from a nuclear bomb, but there’s nowhere you can hide to get away from in-app purchases.

All of us harbor a deep-rooted fear of nuclear war. The prospect of a superpower losing control, pushing the button, and leaving us with a world of ash, rock, and poisoned air is so terrifying that we have to smile and laugh about it on a day-to-day basis just to stay sane. Maybe that’s why Nuclear Outrun for iOS introduces a wasteland teeming with hipsters, cheerleaders, and irradiated zombies wearing rainbow afro wigs. There’s lots of violent driving action to be had here, but dealing with the hefty in-app purchases is as much fun as suffering through a case of radiation poisoning.

Nuclear Outrun for iOS is an adaptation (and modification) of the popular Flash game of the same name. The original premise has been carried over: most of the world has been decimated in a nuclear war, and there’s one final nuke on the horizon that’s powerful enough to finish off the sad, lingering remains of humanity. Your goal is to drive as far away as possible before the bomb explodes. Problem: nuclear bombs are kind of renowned for their ability to cause wide, wide-spread destruction.

Nevertheless, you gotta give it the ol’ human try. You have a car and a series of weapons that are capable of blowing away the many obstacles and enemies that get in your way, including all kinds of zombies, missiles, debris, and tons more. You fire on your enemies by tapping the screen, and you’re granted new weapons and a few precious seconds every time you hit a checkpoint. There are also coins to collect for upgrades, and survivors to save. Survivors can become drivers that offer very handy bonuses, like the ability to gather extra money, or the ability to give certain weapons an extra kick.

The gameplay in Nuclear Outrun is busy and chaotic, but no one really expects Earth’s final moments to be a Sunday picnic. That said, there’s a good chance your car will take too much damage and explode long before the nuke goes off. This is where the iOS version of Nuclear Outrun takes a different and disappointing path from its source material. In the original game, you can collect skill points that go towards upgrading your vehicle. In the iOS game, all your upgrades are reliant on the coins you collect. Unsurprisingly, grinding for coins is tedious, and upgrades are costly. The solution? Buy more coins with hard currency, of course. What’re you going to do, take it with you? 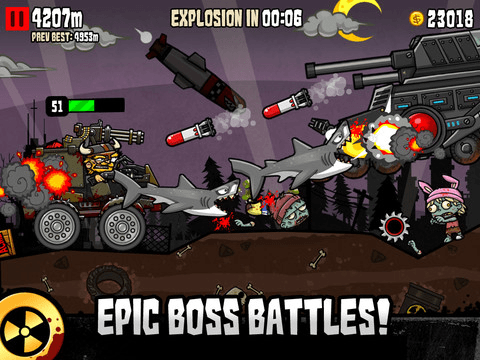 The iOS version of Nuclear Outrun is loud, violent, and packed with nonstop action—all of which may actually be a turn-off if you’re a fan of the original game’s eerie minimalistic presentation. The steep price for in-app purchases certainly robs you of the sense of progress that’s granted in the original Nuclear Outrun, which is disappointing. Nevertheless, sometimes you just need to zap zombies in droves, and Nuclear Outrun offers up heaps of the undead for punishment. Maybe it’ll help keep your mind off our inevitable nuclear annihilation for a while.