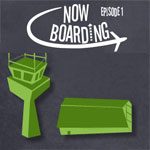 Managing a small airport is no easy task, so why not see if you’re up to the challenge? Turn around a struggling airport by mapping flight plans, opening new routes, buying bigger planes, and making sure all of your customers stay happy in an attempt to turn around the business woes of a little airport with a lot of personality.
As manager, you’ll be tasked with making sure that everybody in your region of the country gets where they are going. Every passenger is wearing a t-shirt that tells you where they’re headed, and it’ll be up to you to place them on planes and map out the best routes to get them there. On one plane, for example, you could have three people heading to Nashville and one to New Orleans.
You’ll want to map it out so that the plane visits both destinations. You’ll also need to pick up passengers from other airports, so you may end up wanting to let the three people off in Nashville first if it means you can pick up two people from that airport to bring to their destinations along the way.
It’s a big balancing act — how many different destinations can I get each plane to cover? How many planes can I keep in the sky? How quickly can I get those planes back so that my passengers don’t get angry? It’s a new spin on time management, and it’s one that offers up a surprising amount of depth and intelligence.
As the game progresses, employees are introduced that automate some of the gameplay. A customer service rep, for example, will try to make sure everyone who is waiting is happy. A gate attendant will load the planes according to the routes you’ve created. Your ground crew will taxi your planes to and from the runway. When the game starts, all of these tasks are in your hands. But as the difficulty ramps up your focus will shift primarily to planning routes. Automating these tasks as the game grows tougher allows for a smooth transition from one style of play to another. In this sense, the game is incredibly well balanced.
A few small design choices easily be nitpicked, but they’re hardly worth complaining about. Routes can be planned to numerous destinations with repeat trips, but making a stop at the hub always ends a route. Improvements can be made at the main terminal, but terminals in other cities can’t be tweaked to ensure the happiness of patient passengers. Once you’ve boarded passengers, you can’t reroute them to a better plane. Little things like this become noticeable after awhile, but again, the overall effect these things have is so minimal that it barely warrants a mention.
The big picture objective in Now Boarding: Episode 1 is to service 80 passengers in a month, and reaching that goal will likely take you the better part of an afternoon. Episode 2 can be played right away, but much to our surprise isn’t a web-game like Episode 1. Built on the Adobe Air platform, the remaining four episodes are available for download in one tidy package. Of these remaining episodes, only episode 2 can be played for free.
Most web-games tend to lend themselves to 5 or 10 minutes diversions. Now Boarding isn’t one of those games. A fresh spin on time-management, you’ll be amazed at how much fun you can have flexing your flight mapping skills. Just be prepared to sink an afternoon into this one. You won’t be able to stop until you know everyone has arrived safely at their destination.