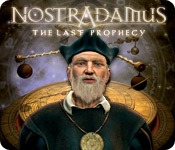 Nostradamus – his name is synonymous with great prophecies thanks to his famous series of quatrains written in the 1500s. Nostradamus: The Last Prophecy is a classic adventure that takes us into the world of Nostradamus in 1566 during his last few months of his life. A murderer is killing people in the court of Queen Catherine de Medici as per one of Nostradamus’ prophecies, and you, as his daughter, must find them before it is too late.

The game takes place in Nostradamus’s home, Salon de Provence during the period of the French Renaissance. Queen Catharine de Medici comes to consult with Nostradamus about a prophetic quatrain he wrote about her that seems to be coming true, but unfortunately Nostradamus is too frail to leave his home and offers sends his son Cesar, who is really his daughter, Madeleine in a disguise.

After speaking with the Queen further, Madeline discovers the quatrain speaks of 12 devastating events that will occur to the royal family and that several deaths have occurred within the Queen’s entourage. Intrigued, Madeline offers to investigate the deaths and discover if this is really a prophecy come true or an evil person helping fate along.

The gameplay in Nostradamus: The Last Prophecy sticks fairly close to the standard point and click adventure game by giving you a series of open areas with objects and characters to interact with. Characters in the game can be talked to through a series of dialog subjects, and items in the game can be picked up or manipulated in some way. Your in-game cursor will always change its icon to indicate what action you can perform on the object or character.

Madeline is given a tool kit by her father which serves as her mini CSI kit. These tools can be used to zoom in on objects or scenes, modify objects, or solve puzzles. Puzzles in the game come in several forms, like recipe making, astrology charting, or geometry puzzles. Their difficulty levels range from fairly simple to downright frustrating, so plan to work hard in some spots to make it through this game. Everything Madeline finds, hears and learns is stored in her inventory system, so missing information isn’t a big deal in this game as you can always go back to your inventory notes to catch up.

This game features a very strong female character, as Madeleine comes across as a smart and very scientific person and the fact that she must hide her identity behind her brother’s to fool as those around her, makes it all the more fun to play as this character. The storyline was wonderful and pulls you in as you investigate each death with your little tool kit. The game has an excellent mix of puzzles and story, which kept me glued to my keyboard and the puzzle difficultly level was balanced enough that I never felt unchallenged or overwhelmed by them.

Music in the game had wonderful operatic tone to it with its inclusion of soprano voices, orchestra strings and percussions that would intensify at the appropriate moments to add to the game’s storyline. Unfortunately, the character’s dialog and believability was a bit off in the game due to the lack of accents.

Though the game lacked any huge bugs, I did come across a strange invisible wall within the village which seems so out of place for the game design. There were two routes from Nostradamus’ house which both seemed to lead to the same open area, but one route was blocked with an invisible wall and one wasn’t. A design flaw that could have saved players a few trips back around to the other route. On a sad note, Madeleine can die in two different points in the game if you fail to act quickly enough and while you can restart, you do have to redo two puzzles after one of her deaths, so it’s better just to act quickly and save her.

Between the great storyline and amazing puzzles, Nostradamus: The Last Prophecy turned out to be a throwback to the old adventure games I loved playing when I was a teenager. This game is rated Teen, but it’s only due to mild blood and violent references made in the game – there is no actual graphic violence shown in the game. I can easily recommend this game, especially to young females since Madeleine is an excellent role model.

If you liked this game, try Cassandra’s Journey: The Legacy of Nostradamus, Return to Mysterious Island, and NiBiRu: Age of Secrets.