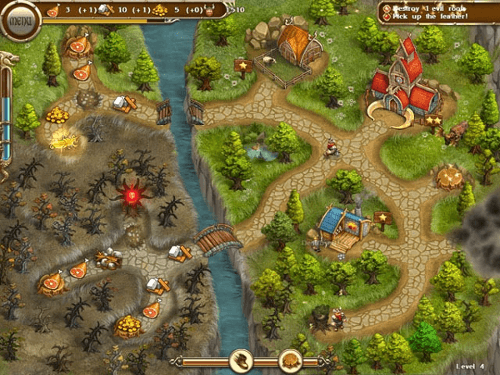 Northern Tale is best enjoyed alongside a Viking-sized tankard of booze—though it’s fun to play with apple juice, too.

Fiction books, cartoons, and even video games have taken liberties with Viking history, and that’s putting it mildly. When we think of Vikings, we tend to think of a (tall) Tolkien-esque dwarf with an affinity for water instead of rock. If you want to learn more about legitimate Viking history, you should consult your local library. But first you should suspend belief long enough to play through Northern Tale, a strategy/time management game that puts you in charge of a few horned warriors.

As soon as you boot up Northern Tale, you’re put in charge of the Viking king Ragnar. Ragnar returns from a long trip overseas to discover that his homeland has been cursed by a witch. Aside from destroying villages, drying up the fields, and releasing a plague of monsters, the witch has also kidnapped Ragnar’s daughters and turned them into animals. You need to help make the land fertile again and bring the girls home.

Northern Tale is a mish-mash of strategy, resource collection, and time management. There are three levels—Summer, Fall, and Winter—with several stages contained within. Every new stage is chaos: there are impassable cracks in the road, rocks that block your way, monsters scattered everywhere, and farms and workshops left in ruins.

Fortunately, there are also resources that are just waiting to be collected. Ragnar needs three things to get his Kingdom back into shape: food, gold, and materials. Repairing ruined bridges, restoring buildings, and fixing the roads takes food and materials (not even the Apocalypse will stop a Viking from eating hearty), and clearing away evil monsters takes gold, since druidic and exorcist Vikings don’t work for free.

Resources can be picked up off the road, and magical stumps will also provide for you after a set amount of time. Restoring and upgrading farms, workshops, and gold mines also brings in a steady supply of the good stuff.

At first, Ragnar works by his lonesome, but when you’re a bit further into the game you gain the option to add more Vikings by upgrading your home base on each stage. The more Vikings, the merrier. There’s a lot to be done, and the Vikings need to run back to home base after collecting resources. Sure, they can run fast, but you’re still going to find yourself pressed to beat the countdown that ticks away seconds on every stage.

You also need to think ahead about how to spend your materials. Should you repair the farm and ensure a food supply, or should you repair the druid’s tent and do something about your wolf problem? You need to make smart snap decisions, or you may find yourself forced to wait while your resources slowly build up enough to let you perform your next task. Worse, you might find yourself stuck without supplies, and with no hope of building them up again. In these instances, a do-over is your only option. 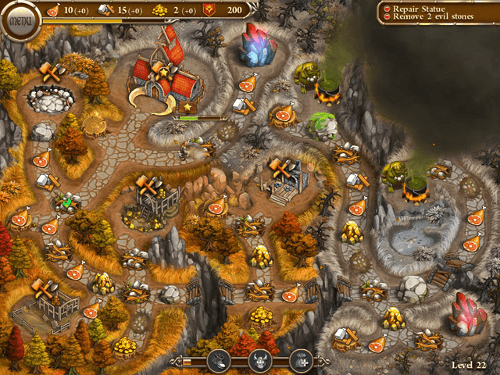 Whereas traditional strategy games tend to be ponderous, Northern Tale moves quickly and is simple to learn (though the early stages are still a bit confusing, as the tutorial isn’t as thorough as it could be). It’s also addictive, fun, and accessible. Seasoned strategy fans should enjoy the pressure of completing tasks in the order that will give them the best time and score, whereas casual fans can turn off the game’s countdown for a more relaxed playing experience.

Northern Tale‘s graphics are impressive too, thanks to its lush depictions of the seasons. When you remove an evil influence in any stage, a portion of the map blossoms back to life. The landscape transforms from an ashen wasteland back to a rich forest, which grants you a real sense of progression.

Northern Tale is a worthwhile download. It’s not extremely long, but what’s there should keep strategy and time management fans satisfied for a commendable length of time. Put on your best horned helmet and get to work. Just don’t eat anything you find on the road in real life.