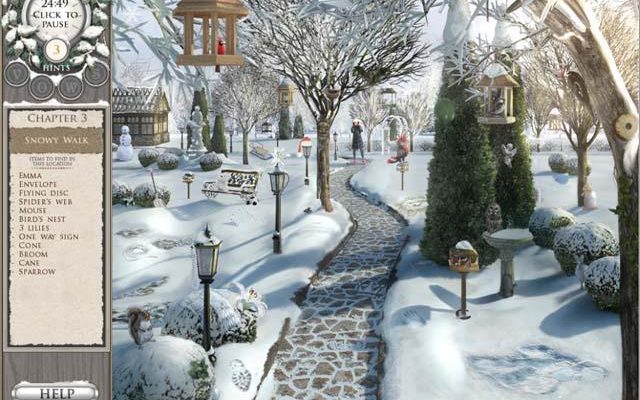 When it comes to hidden object games with romantic themes, Cupid’s arrow has tended to miss the mark. If Gamezebo’s past reviews of such games are any indication it just goes to show that even though HOGs and romance novels might seem like a perfect fit for each other, there’s still plenty that can go wrong in the execution. Leave it to the folks at I-play and Floodlight Games (the team behind the successful Agatha Christie and Women’s Murder Club hidden object franchises) to get things right with Nora Roberts: Vision in White.

The story, which is adapted from author Nora Roberts’ novel Vision in White, follows on the business and personal life of a wedding photographer named Mackensie, who together with long-time friends Parker, Laurel and Emma runs the most successful wedding planning business in Connecticut.

If you’ve played any of Floodlight’s previous titles, you’ll recognize the same “classic” hidden object game vibe where you’ll be searching for items exclusively (instead of gathering items into an inventory to solve puzzles), and participating in only the occasional mini-game. 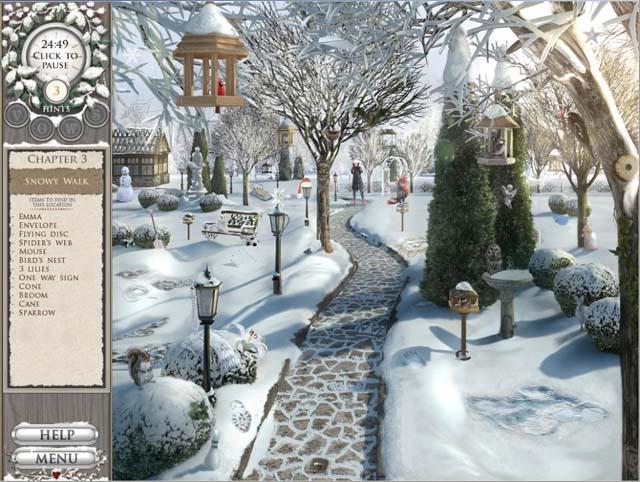 Another throwback of sorts is the game’s hint system. You only get a certain number of hints per chapter, and you’ll have to ration them across several scenes. However, you can earn more hints by finding letters that spell out V-O-W-S in each scene, and by successfully completing a mini-game. By default you start the game in a Timed mode that typically gives you between 20 and 25 minutes to find all the objects in a scene. Clicking incorrectly too many times in a row results in you using a few seconds off the clock. There’s also a Carefree (untimed) mode that can be switched to from the Options menu.

The meat of the game – the hidden object scenes – are attractive and fun to search through. You’ll follow Mackensie to various wedding sites as she captures the special moments leading up to the client’s big day. Occasionally, some situations reminded me a little of the “wedding disasters” in the Dream Day series, such as when Mackensie’s keen eye captures a bridesmaid hiding under one of the tables in the ballroom. But Mackensie’s not all work and no play; her personal life also weighs heavily in the story and gameplay as she explores a romance with a handsome fellow named Carter, and balances relationships with her friends and high-maintenance mother.

Although it’s perhaps a little unfair to be expected to find a snowflake and a white dove in a room dominated by white table cloths and curtains (the game really does live up to the name Vision in White), overall I was impressed by how well the majority of objects were hidden within each scene. Some of the more careless hidden object game developers just seem to dump items randomly on top of a background, but the scenes in Vision in White never devolve to that degree of random clutter. While there is some repetition of the scenes as you travel to locations like Mackensie’s office and the girls’ meeting room multiple times, you’ll find yourself in unexpected places too, like the interior of a limo during a night on the town, or a close-up of Mackensie’s camera bag. 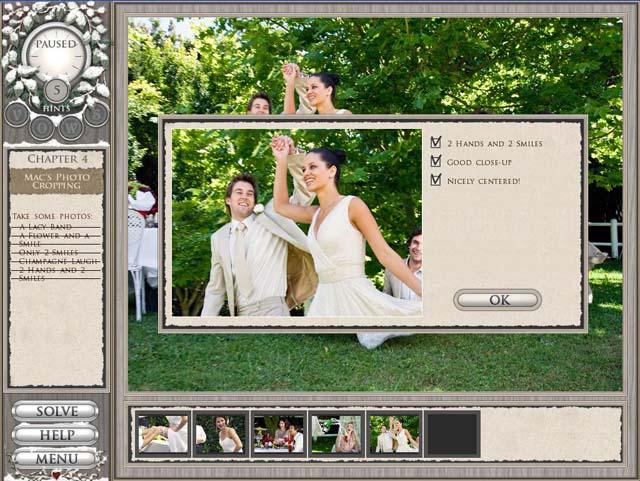 Mini-games don’t happen all that often, but when they do they’re not the usual thoughtless jigsaw puzzle and memory match throwaways. Wedding-themed games like decorating cakes and cropping photographs are actually tied to the story and fun in their own right.

In a genre where rush jobs are becoming far too common, Nora Roberts: Vision in White is a well-made and enjoyable hidden object game that actually injects some gentle challenge back into the mix. Want to skip a mini-game? Fine, but there are consequences (you won’t earn that extra hint). And no, you can’t just keep clicking the Hint button and have it recharge after 20 seconds either.

I only have a handful of complaints: For one thing, if you run out of time in a scene you have to restart the whole chapter from the beginning, not just that particular scene, which means you might have to play some scenes over again. The V-O-W-S letters can be rather cryptically hidden to the degree that you might find yourself wishing you could use a hint just to locate the last letter! And finally, the photography mini-game doesn’t make all the criteria needed for taking the “perfect photo” clear until you’ve failed at least once. It would be nice to know all the things you need to do up front.

Aside from these issues, which are minor in the face of everything the game does right, Nora Roberts: Vision in White is a solid choice for hidden object game fans that don’t mind being challenged a little.