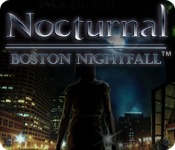 People have always been intrigued by vampires, and today the suave bloodsuckers are more popular than ever thanks to TV shows like Buffy the Vampire Slayer and Blood Ties. Unfortunately, even though Nocturnal: Boston Nightfall delves into the world of these supernatural creatures as well, the hidden object game from Gameshastra isn’t going to go down as a classic.

The game opens with a grizzly scene: Claire, the main character, is lying in a bloody heap after a mysterious attack and about to die. But she’s given a second chance at "life" when she’s taken under the wing of a 200-year-old Nocturnal named Alonso. Nocturnals are like vampires, but they feed by collecting specific objects and distilling them into "Essences." If Claire can’t create the Essences in time, she’s doomed to become a Brethren (mutant, evil humans) or fall into a deep sleep forever.

The story is hampered by mediocre dialogue. It’s presented in comic book style panels that can occasionally be vague about the order you’re supposed to read the text bubbles in.

As for the gameplay, it’s straightforward hidden object fare. You’ll search a series of scenes to find objects like pen, parakeet, fortune cookie and newspaper from a list. A handful of the scenes depict landmarks from the city of Boston, like Boston Garden and Chinatown, while other scenes are generic locations like a museum, a theatre, and subway tunnels. The game offers both a timed and timeless mode. In timed mode, clicking in too many random locations nets a 6 second penalty.

After each level you’ll play one of three different mini-games, none of which are terribly compelling. There’s a straightforward memory card game where you overturn pairs of cards until the board is cleared. There’s also a lock-picking game where you need to figure out the correct pattern by trial and error; and finally, a Simon Says-style memory game where you have to play back the correct sequence based on visual and sound cues.

The biggest issue with the hidden object portion of the game is that items are frequently too small and hard to see. There are a limited number of hints to work with, and once you’ve used them all up, the only way to get more is by playing the mini-games. Sometimes you can only play the mini-game once, but other times you’re given the option to replay the games over again to earn more hints to stockpile. The Simon Says mini-game is especially drawn out, though, and becomes more difficulty and long each time it appears, so the game really makes you work for those hints.

Nocturnal: Boston Nightfall clocks in at around two or three hours, making it definitely one of the shorter hidden object games on offer. Given the simplicity of the game, the short length on top everything else is definitely a disappointment. There is some replay value since the list of objects to find changes each time you revisit a scene, but overall the game fails to stand out in spite of its relatively unique supernatural theme.