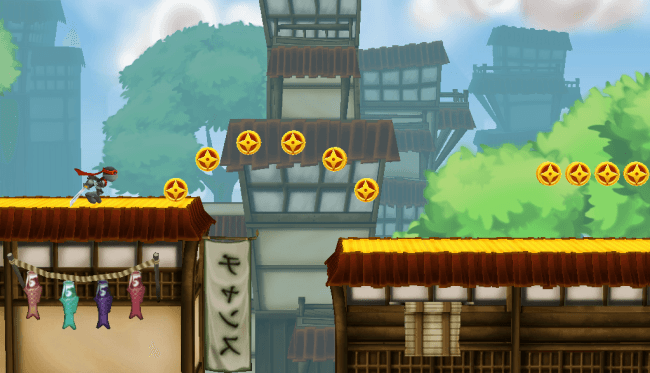 Too basic for its own good

NinJump Rooftops brings us back to a time when the App Store was just starting out, and simple timewaster games like Doodle Jump and Can Knockdown ruled the mobile scene. In fact, Backflip Studios’ own NinJump used to be the talk of the town around these parts in 2010. However, it’s not 2010 anymore, and with so much gameplay innovation and graphical prowess shaping the world of mobile gaming as we know it today, can these basic little timewaster games still hold a place in our age of high-end graphics and deeply immersive gameplay?

Much like everything else in NinJump Rooftops, the concept is simple: you are a ninja, and you have to run along the endless rooftops, while avoiding hazards and taking out enemies with your ninja jump attacks. The controls are equally simple, with one tap anywhere on the screen corresponding to making your ninja jump, a second tap entering into a double jump, and holding down on the screen increasing the height of your jump. The gameplay itself is of the sidescrolling endless runner variety, and Backflip Studios uses some pretty nice 3D visuals to bring the world to life (although your scenery will be strictly limited to the Asian-inspired rooftops, and there’s never much of a variety no matter how far you manage to make it during any one of your runs). 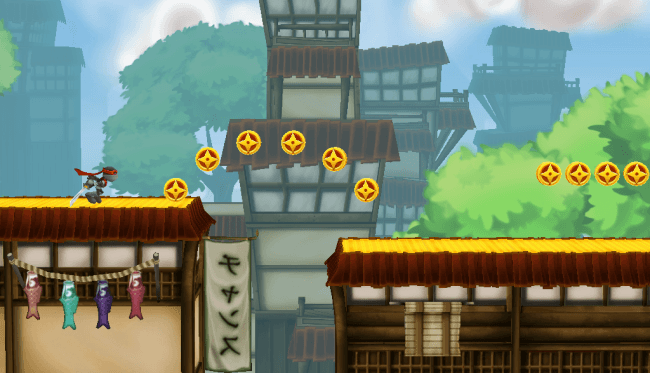 So you’ll be running and jumping as par for the course, and picking up tons of gold coins along the way which you can use to buy power-ups that give you an extra added edge. The power-ups are also standard endless runner fare, with magnet boosts that draw surrounding coins towards you, and a big blue rocket that lifts you up and saves you if you happen to fall. You’ll also be met with your fairly typical in-game goals, such as “Collect X amount of coins over time” or “Run X amount of meters in a single run.” Completing these objectives will net you more additional coins, which can then be used to buy more power-ups, and so on.

You can also pick up various power-ups and bonuses in the actual game world right as you’re running. Some of these collectables come in the form of big special coins that you can use to play a pachinko game of sorts at the end of your run, where you drop the special coin into a minefield of pegs and hope that it falls in the center slot for the biggest reward. Players can earn extra Jade in this manner, the game’s premium form of currency, which can be spent on a handful of optional costumes for your character to wear, or as a “Continue” of sorts which allows you to keep going in the same run if you happen to fail. 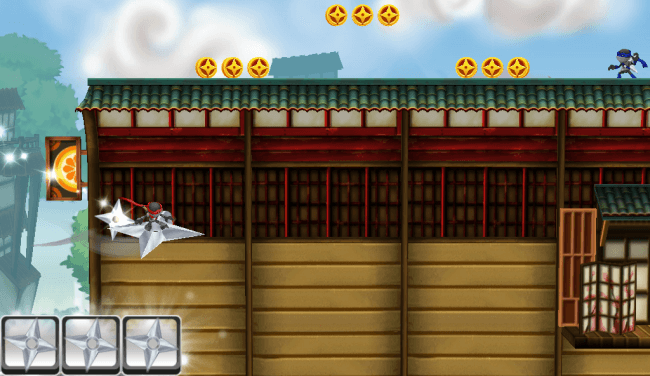 The biggest problem with the game, therefore, is that there’s really no incentive to keep going in NinJump Rooftops. It’s fun for the first few minutes, but quickly becomes mindless before long, as there are never any long-term milestones or change-ups to the gameplay formula to keep you on your toes. The in-game missions only serve to give you more coins so you can buy more power-ups to help you run further, but running further just feels pointless after a while given the game’s extreme simplicity and overall lack of depth. What’s more, you’ll basically see everything that NinJump Rooftops has to offer in these first several minutes, and nothing really changes all that much for hours afterwards.

The one interesting mechanic about the game, though, comes in the form of the enemies that are hell-bent on stopping your ninja and ending his run. The enemies range from squirrels and blue birds, to shuriken-throwing ninjas and giant panda warriors, and you’ll be able to trump each one by timing your jumps to collide with their respective oncoming attacks. The cool part about this is that if you manage to defeat three of the same enemy type in a row, then you’ll be rewarded with a special power move that’s related to that specific enemy. For instance, after defeating three blue birds in a row, a giant blue bird will sweep in from behind you and lift your ninja up for a few meters: automatically bypassing all jumps and destroying all enemies in your path. 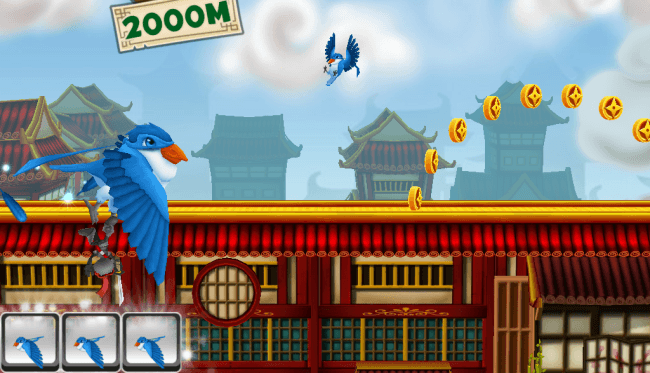 But in the end, that just isn’t enough to save NinJump Rooftops from what could have been a great little game a handful of years ago. While the game is technically a big step up from its predecessor NinJump, it becomes painfully obvious after only a few minutes of playing that this particular mobile formula has become incredibly dated. There is no depth, no variety, and simply no fun anymore, and after being conditioned by such progressive mobile experiences over the years, we’ve just come to expect something more now. The sad truth of the matter is that bare-bones simple games like NinJump Rooftops are better left where they belong: way back in 2010.