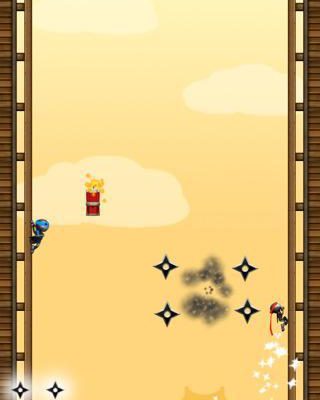 Backflip Studios have proven themselves time and again to be among the best developers in the world of free iPhone gaming. Paper Toss became a national obsession when it first launched, with both Strike Knight and Graffiti Ball receiving their own share of critical acclaim. Now Backflip has decided to tackle the ever-popular survival genre, offering up their first game about a ninja that loves to climb.

At first glance, Ninjump looks like little more than a clone of Ninjatown: Trees of Doom, but dig a little under the surface and you’ll find that Backflip’s latest offering does more than enough to set itself apart from its likely inspiration. Gameplay here is fast and twitchy, unlike the slow and steady pace of its competitor. Your ninja runs along the wall at a rather maddening pace without any help from you. In fact, the only control you’ll have over your character is tapping the screen to initiate a jump from one wall to another. Thanks to a good assortment of obstacles, you’ll find yourself tapping up a frenzy in no time. 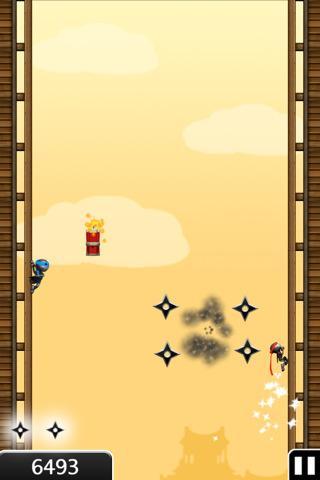 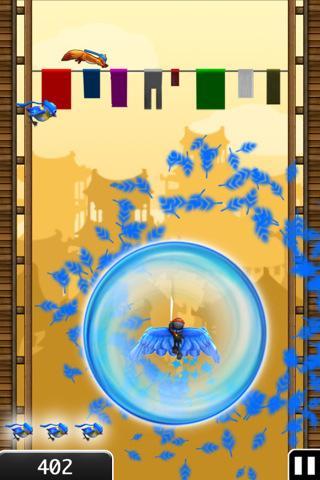 The biggest thing that sets Ninjump apart in the ever-growing sea of survival games is its unique approach to power-ups. Rather than finding them randomly dropped throughout the level, your ninja will have to work for his special items. As we’ve already mentioned, the game throws a variety of obstacles your way: birds, squirrels, star-throwing ninjas – there’s a pretty diverse cast of characters trying to stop your skyward progression. To earn a power-up, your ninja will have to attack the same type of obstacle three times in a row. If you take out three birds while jumping, you’ll grow wings and soar up to a higher point in the game. If you take out three throwing stars, you’ll spin your way to new heights. If after taking out two throwing stars you hit a squirrel, however, you’ll be back at square one in terms of earning a power-up. The challenge lies in figuring out how to avoid certain obstacles so that you can get three in a row of a specific target.

The presentation in Ninjump is simple but sufficient. There’s nothing really flashy here, but little touches like watching your ninja sprout a big puffy tail after defeating three squirrels, or watching your protective bubble spin in a circle as you climb, really showed that some thought went into the graphics. The music is a good fit as well, offering up oriental-style excitement that matched both the pace and theme of the offering.

Survival games are a dime a dozen these days, but as is usually the case, Backflip Studios knows how to make their mark. They may not bring anything miraculous to the genre, and the style of gameplay reflects some clear inspiration from the competition, but they’ve put the pieces together with enough unique twists to make Ninjump a game that can stand on its own two feet. Sure there are better survival games on the market, but as a free offering, Ninjump is a game that’s well worth playing.