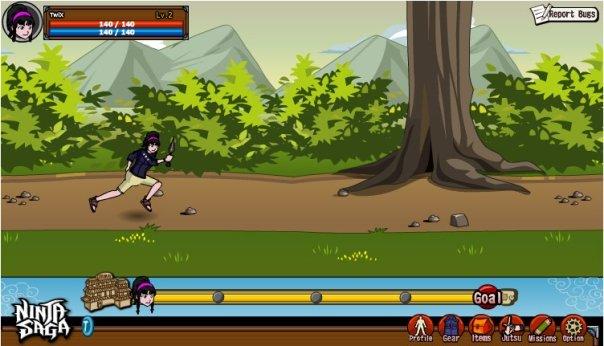 Most Facebook games are free to play and make their money by trying to entice you to spend real-world cash on virtual items and other perks. Ninja Saga is a free-to-play action role-playing game (RPG) that takes the concept a little too far, however, and doesn’t really have enough content to warrant the costs associated with it.

The story is a bit convoluted, based on the game’s official website, involving the theft of a magical scroll containing powerful mystic beings. While the intro shows this event, the plot itself really isn’t referred to much afterwards. Players take on the role of young ninjas in a village, honing their skills while going through a series of near-identical missions that seem to have little to do with finding the missing scroll.

The gameplay gets old pretty quickly: missions are all based around turn-based combat. Basically, you have a number of slots in which you can equip your various attacks and abilities, and you’ll then engage in a certain number of battles against varying amounts of enemies. An action bar at the bottom of the screen has to be filled before you can take any action.

There is multiplayer available in the game, but it’s impossible to tell how well it plays: the PvP arena was unavailable every time I tried to get in. At the present time, there are only two servers available for PvP combat, with the option to play against friends or find a stranger to battle. Unfortunately, these servers apparently aren’t all that large, because a few dozen attempts over different days resulted in the same message: “The PvP room is full. Please come back later.”

At first glance, Ninja Saga seems like it’s got some impressive graphics: the intro movie is great, showing off some beautiful cel-shaded Flash work. There’s a nice little avatar creation system, too, allowing you to choose from a wide variety of colors and hairstyles.

The graphics never look bad, but they don’t look terribly original, either. Many of the characters you’re likely to encounter often look a little too much like those we’ve seen in shows like Naruto or games like Final Fantasy VII. Many of the characters that deliver missions or instructions have the signature headband and spiral design seen in the former, and there was an early mini-boss battle with a “Battle Cat” that looked exactly like Red XIII from the latter.

The other problem with production values in the game is its audio: generally, you don’t have to deal with much

The game still has some bugs to work out, too. In two separate incidents, I suddenly was told that I had failed a mission mid-battle. No explanation was provided, so it seems like the battle engine isn’t a hundred percent stable. That said, these failures were random and weren’t a regular irritation at all.

Also, at random times, the mouse would disappear when it was over the game itself, though it would still register with the Flash client. If this happens, you have two options: flail around with the mouse until the on-screen item you want is highlighted, or refresh the page and log back into the game. This happened somewhat regularly, in both Safari and Firefox. 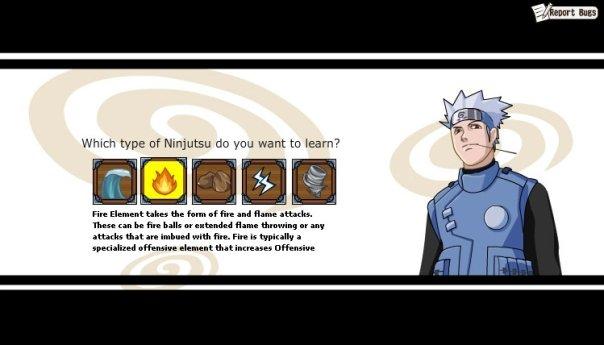 Ninja Saga‘s biggest problem, unfortunately, is that it doesn’t really feel fun if you try to play the game without spending any cash on it. Earning in-game gold is easy, although high-level items and abilities cost a lot and it takes longer and longer to earn enough to afford them through standard missions.

Instead, Saga Tokens are necessary to speed up gameplay. It should be noted that there is no actual requirement to spend money on Ninja Saga, but you’re not really going to get the full game experience if you don’t. Saga Tokens can be converted into gold, are necessary to buy certain items, and can be spent to instantly learn a skill (if you’re playing for free, higher-level abilities take increasing amounts of real-world time to learn).

Permanent game account upgrades can be purchased by spending $19.99 on a “Ninja Emblem”, which is what gives players need to access the full content of Ninja Saga. Buying an emblem allows you to play with more than one character per Facebook account, control more than two elemental types, hold more items in your inventory, grants access to special missions, learn skills instantly, and acquire premium pets/items in the game’s different stores.

This whole system is incredibly frustrating for someone who doesn’t want to actually pay any money for a flash game on Facebook. Normally, such games are expected to be slower and a more difficult to play through when you’re using a free account, but they system used in Ninja Saga seems a bit extreme. Maybe if the gameplay was more varied or there was more content available, shelling out some money wouldn’t be such a bitter pill to swallow. As it stands, however, there are better -and less expensive-games on Facebook that deserve your attention.