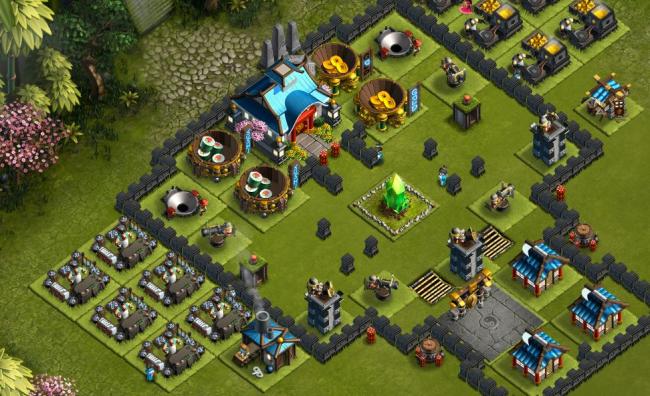 If you’re a fan of Clash of Clans, you may want to take the fight to Facebook with Dojo Mojo.

The troops that fight for you in Clash of Clans include Barbarians, Goblins, Giants, and other warriors and creatures that are popular in Western mythology. However, mystical war knows no borders. Zynga’s Dojo Mojo is a combat-strategy game that operates in the same vein as Clash of Clans, but features an Asian setting and soldiers out of Eastern myth. Due to their shared heritage, Dojo Mojo has many of the strengths that help keep Clash of Clans on the top of the App Store’s game charts—but it also shares the same weaknesses, too.

Dojo Mojo puts you in charge of an army that’s sworn to defend a village and its princess. Your primary threats are the skull-masked shogun army, not to mention other players that are able to randomly swoop in, wreck the joint, and steal all your resources. You need to build up strong troops that can invade in turn, but you’re also responsible for equipping your village with suitable defenses.

If you want to keep your village from becoming a single sentence in a dusty history book, you need a steady supply of two resources: gold and sushi, both of which your village generates over time. Gold lets you build defenses and towers, whereas sushi lets you train troops. The more powerful the soldier, the more sushi that’s required. As you might expect from a game that takes place in the Far East (or some variation thereof), your warriors are primarily of the ninja variety. You can train classic grunts that serve as cannon fodder, as well as kunoichi that attack from a distance, stealthy samurai that can slip past enemy lines undetected, and much more.

Dojo Mojo also lets you summon hulking Oni, ogre-like monsters that tramp around your village and help protect it. Unlike your other troops, which attack the nearest target automatically, you can command Oni to take down specific targets. Commanding Oni adds strategy to Dojo Mojo and helps differentiate it from Clash of Clans. 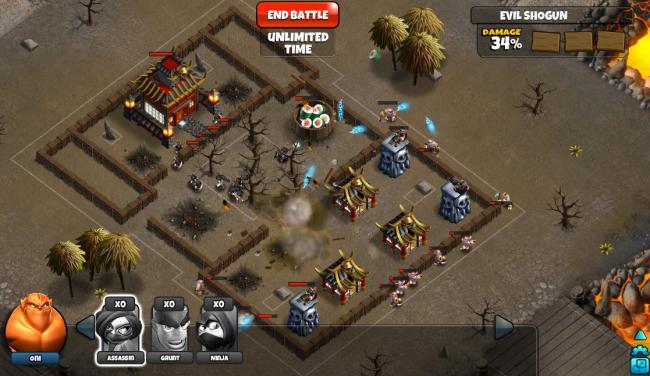 But anyone who plays either Dojo Mojo or Clash of Clans will need an unwavering supply of patience. Like its inspiration, Dojo Mojo features lots of waiting around. Tons of it, in fact. Your troops take time to train, your sushi chefs take time to prepare, your goldsmiths take time to smelt, and your buildings take ages to upgrade. You can speed up any task with a supply of the game’s hard currency, jade. In fact, you’re supplied with a large store of jade when you begin a new game, which helps you get up to speed with the enemy soldiers that are constantly sniffing at your gates. Beyond your initial store of jade, you can get more for recommending friends, or for performing particularly well at battle.

Though it boasts a few differences, Dojo Mojo is essentially Clash of Clans as presented by Zynga. At this point in time, you’ve either turned away from Zynga’s derivative fare, or you just want a solid game to pass the time with. Dojo Mojo is definitely solid, if not particularly inventive. Just make sure to have another game on hand to play during the game’s long waiting periods.