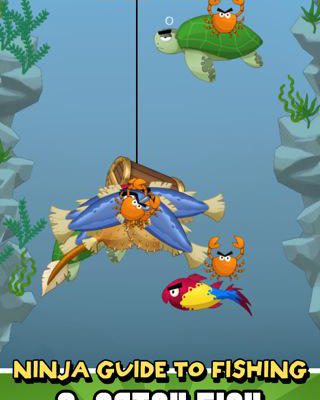 I’d like to go on record as saying the name Ninja Fishing was an unfortunate choice. I get it – they’re trying to make you think of games like Fruit Ninja. With the amount of titles on the App Store, maybe something like this is effective – but it just feels like a cash grab based on the title alone. What’s most likely to surprise you about Ninja Fishing is how much deeper it is than the game it’s trying to associate itself with.

So is Ninja Fishing a Fruit Ninja clone? Sort of, but not really. There’s definitely some slashing of food going on, but there’s also a lot more to it than that. So while the game starts from a place of trying to copy popularity, they’ve layered on quite a few interesting additions to create a final product that only partly relies on the tried and true formula of ninja slicing and dicing.

Ninja Fishing is a game with three different components that form together to give you a total score. The game always starts with your ninja in his boat, fishing pole in hand, ready to test his luck in the fish filled waters. You’ll start the round by tapping the screen to drop your lure and then tilting the screen left and right while the hook descends avoiding all the fish you see while it goes deeper and deeper into the water. You can tap the screen to momentarily turn the line into a drill to speed up and cut through fish to get deeper. The deeper you go, the better fish you’ll find. It’s kind of like Doodle Jump, but in reverse.

Once your line either reaches it’ end or you hit a fish, then stage 2 triggers. Now the line is retracting as the ninja reels in his fish – and fast! As this happens, you’ll tilt the iPhone back and forth trying to hit the fish to collect as many as you can on your line’s trip back to the surface. It’s still a little Doodle Jump-ish, but you’re trying to hit targets and it’s all happening very quickly.

Once the line gets back to the boat then stage 3 happens, and here’s the Fruit Ninja connection. All the fish you collected in stage 2 get thrown up into the air, and you’ll swipe to slice them all up. Some fish may require multiple swipes to cut, and there’s the occasional bomb thrown in for good measure. Only once you slice up the fish do you get points, meaning that all the work you do in stage 1 and 2 are just to set you up for your potential high score.

It’s an interesting dynamic, because how well you do in the first section puts you in a better position in the second. If you only manage to get the hook down about 40 meters, then it doesn’t give you much time to trap fish. This means you won’t have anything to slice in stage 3. Success at the start will hopefully will lead to a big payoff at the end. 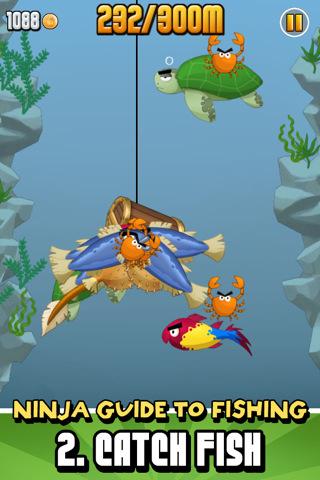 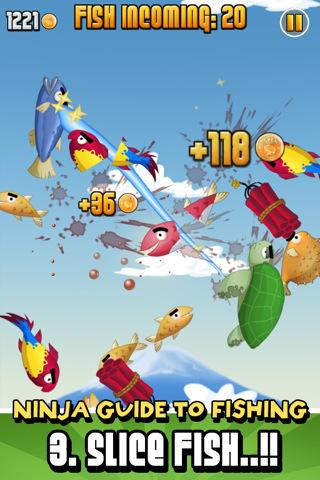 While the play in Ninja Fishing is plenty of fun, it’s the upgrade system that provides the “just one more time” feeling to the gameplay. Those points you’ve been earning slashing fish can be spent on different items that’ll give you a leg up on the proceedings. You can buy things like longer string to get deeper (letting find more point heavy fish) or bigger hooks to carry more fish to the surface. You can equip that drill with more fuel so you can use it more often, or buy a book that makes the fish more valuable to sell. There are a bunch of different options, and varying levels of each. So when you finish a game 10 short of buying that next thing, you’ll be tapping the “fish again” button in no time.

I’ll admit it – I was just expecting some dumb Fruit Ninja clone when I first heard the title of the game. So you can imagine how pleasantly surprised I was to find a game that takes that concept and then profoundly expands on it. While I’ll admit Fruit Ninja is a little slicker in its presentation, I’ve enjoyed playing Ninja Fishing far more, and at the end, isn’t that really what matters?