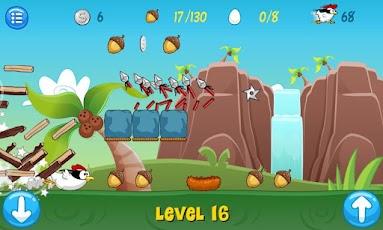 Remember Ninja Chicken? It was that chicken-based platformer that released on Android in March. After over five million downloads, MoMinis decided to set the little guy loose for another outing. I typically enjoy scoffing at developers who rush the sequel to a solid game, especially when the original is less than two months old. In this case, I feel I need to make an exception. Not a ton has changed from the original, but Ninja Chicken Ooga Booga is another solid outing.

The concept is the exact same as before. At the start of each stage, you’re given an eager chicken who needs to jump, slide, and dive his way around obstacles while completing objectives. These tasks are combinations of: collecting coins and acorns, laying eggs in nests, and traveling a certain distance. These objectives are no different from the original, and he only noticeable difference is that the difficulty increases quicker in this adventure.

Alongside a few new obstacles, most of the old ones return in re-skinned fashion. Hula dogs and spears replace most of the former obstacles, with the shuriken and pit of despair returning in their original forms. The new obstacles add much more flavor, however. You can slide down bamboo poles, dive through boxes, and teleport through portals.

Without a doubt, the portals are the best new feature. You run into a blue portal and shoot out an orange one elsewhere (sound familiar?). The portals add a neat change of pace; it’s just unfortunate that they aren’t used in a more creative way.

The most confusing new addition is the minigame found at the end of each stage. After completing your objectives, you’ll encounter a big dog. You’re given the choice to either jump or slide: if you guess correctly, you’ll avoid the dog and get credit for completing the minigame. What’s odd is that there’s no penalty for guessing wrong—and since it’s random, you will guess wrong quite often—and there’s currently no reward for guessing right.

While the guessing game feels out of place and pointless, everything else fits together just as well—if not better—than the original. The new and changed obstacles work together in both fun and challenging ways, the increased difficulty makes the game feel longer (despite having less levels), and the graphics are more polished. 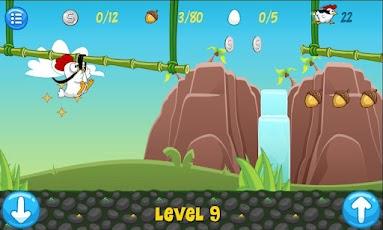 The original Ninja Chicken suffered from two notable problems that carry over to Ooga Booga. The first is the simple issue of frame rate. Everything may be running flawlessly, but the moment you need to time something perfectly, the frame rate drops and throws you off. MoMinis has promised more levels in the future (something fans of the original are still waiting for), so hopefully a bug fix can accompany that update.

The more nagging problem is how formulaic the levels are. The route of each level is randomly generated, but the patterns that build those routes are not. You’ll get used to seeing the same series of rocks, portals, dogs, and spears. In fact, I got to the point where I saw one upcoming obstacle and I could get through the next chunk without looking. I don’t recommend trying that on a regular basis, but it’s possible to do thanks to how predictable the patterns are.

The lack of achievements (and the promise to add them) is proof MoMinis released an unfinished game. As a free sequel to a free game, Ninja Chicken Ooga Booga is currently far from perfect, but is certainly worth your time. It’s a shame the biggest flaws of the original were not addressed, but the increased difficulty and the new additions make this a worthwhile download yet again.