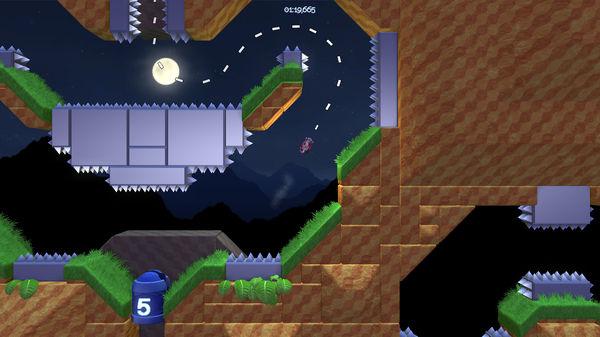 Nimbus is one of the most entertaining indie games of the game, mixing racing and puzzles beautifully.

Nimbus is unlike any puzzler you’ve ever played. That’s a pretty big statement for us to make, but then again how often do you see developers attempting to mix the racing and the puzzle genres together?

It turns out to be a match made in heaven, as players send small robotic vessels zipping around mazes full of spikes to dodge around and pathways to clear. It can be a little tough to control, especially in the later levels with so many tight spaces and precise movements required, but the plethora of collectables and unlockables more than makes up for it.

There is a vague story behind Nimbus, although you’re left to fill in the blanks for yourself. Two small, flying robot vessels – a boy and a girl – are separated when a huge robotic monster takes the girl away. The boy hero must then traverse multiple worlds to find his sweetheart and defeat the evil kidnapper.

The protagonist has a rather unique method for staying aloft – firing from cannons and bouncing on rubber walls does not provide force, but instead gives boost power. What this means is that instead of simply bouncing along the floor, your vessel can in fact bounce along the ceiling too, and even bounce from a wall, then venture upwards using the acquired lift.

It’s a pretty ingenious concept, and the feeling of whizzing around and reaching higher up areas with a combination of bounce and momentum is wonderful. This is helped along by the lovely level design – every new world is exciting to explore, as there is always some new idea or object to experiment with.

Here’s where the racing bit comes in – when you reach the end of a level, your time is recorded and posted on a global leaderboard. These boards are displayed on the fly as you move over the world map, and the thought of trying levels multiple times to grab the top score will keep you coming back for more time and time again. Shaving milliseconds off your personal bests is seriously addictive stuff. 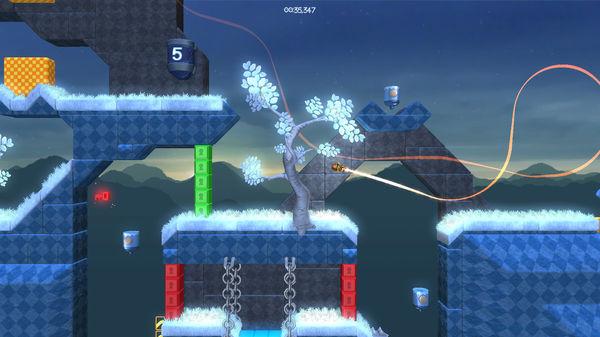 The aforementioned world map is set out in a Super Mario World fashion, with players able to move between points to select levels. It gives a great sense of progression, as you can see just how far you’ve come, and it also emphasises how non-linear the game is – once you’ve found and opened all the secret exits on the various levels, there are multiple paths to find and hidden levels to conquer.

While the content is great, the controls can be rather awkward. Your ship moves in a race-car style – i.e. left turns anti-clockwise and right turns clockwise. After only a few levels you’ll be used to it, but even then certain sections are different to move through, especially tight gaps and areas where precision is needed. It never really feels fully comfortable to play.

Despite this, Nimbus is still a joy to play. Even after completing the main story, you’ve got special coins to find and collect, extra ships to unlock and plenty of high-score tables to top. In total you’re looking at around half a dozen hours of content, with no filler material whatsoever. If any of this sounds like your kind of thing, make sure to check it out.