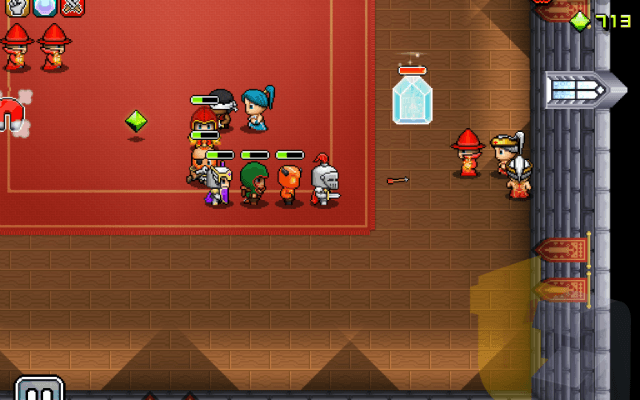 Knights of the Roundabout Table

With Nimble Quest, NimbleBit had nothing to prove, but a lot to gain. Earlier releases Pocket Frogs, Tiny Tower, and Pocket Planes had cemented the indie trio as masters of time management, and a studio to watch. That their next title would be a quality release was almost a foregone conclusion. And yet, from the earliest leaks to the most recent footage, this game stuck out as the biggest departure yet from the company’s tried-and-true compulsion loop. A chance to show that NimbleBit wasn’t a one-genre wonder. A chance I’m very glad they took.

If video games exist in the same digital miniverse, then the loveable Bitizens of NimbleBit releases past sleep safely at night because the heroes of Nimble Quest are working ceaselessly to protect them. Part cellphone classic Snake, part SNES RPG, the title puts you in control of a growing group of medieval fighters on a quest to vanquish evil. Your heroes attack automatically as you swipe directionally to guide them through each micro stage, and enemies drop gems, power-ups and more heroes to add to your conga line. Each beaten level unlocks adorable new characters, and hard-earned gems level them up and help your party’s chances of making it further. But beware: like a rogue-like, death means starting from the first level and working your way back.

About Nimble Quest’s core gameplay, there’s no point beating around the bush: it’s absurdly, engrossingly fun. Audaciously fun, even. At first blush, the thought of “reinventing” a game as dusty as Snake seems like a fool’s errand. Where others might see a lifeless husk of a concept, though, NimbleBit clearly spotted opportunity, and capitalized on it to craft a frenzied experience tailor-made for mobile devices. If their earlier titles took tapping the screen and made it the engine that powered an entire world, Nimble Quest thumbs its nose at the droves of lazy “swipe the screen” games crowding app stores today.

Here, swiping is a key that unlocks meticulously crafted twitch gameplay, as you’re tasked with balancing the micro of avoiding obstacles, walls, and your own party, and the macro of defeating enemies, collecting gems, and snagging power ups. Nimble Quest is a master class in how to spawn enemies, party members, and buffs in a way that makes survival feel always within reach, while scaling difficulty just beyond the boundaries of what you’re prepared to deal with. And to those who might want a virtual D-Pad option? You’re crazy. The controls here are sublime in their dead simplicity. I know there’s a vomit-inducing amount of marketing copy for mobile games touting “addictiveness,” but trust me when I say that this is One More Try: The Game. 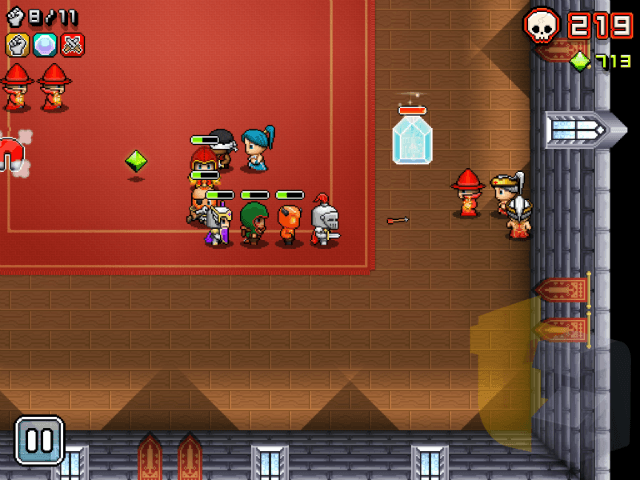 There to sustain the game’s replay-centric design is a progression system that ties just as cleverly to the mechanics of the game as the aesthetics of it. For every stage you beat, you’ll gain access to a new hero, while increasing the limit of overall party members you can carry around. On one hand, Nimble Quest is a brilliant distillation of 16-bit gaming nostalgia. Whether the bomb-throwing Gizmo, the magic-wielding Arcane, or the fire-flinging Blaze, each fighter comes armed with an attack and visual flare that evokes classics like Chrono Trigger in ways that will have you smiling giddily with each unlock. Worth a review of its own is composer Whitaker Trebella’s  earworm of a soundtrack, which channels the whimsical bleeps and bloops of your childhood while infusing them with an infectious energy. Pay attention for it when it hits the internet!

Perhaps more importantly, the increased party limit and variety add a great layer of strategy to a seemingly reflex-driven affair. Having a massive roster of combatants running around the arena may at first seem like an excuse to abandon all caution and run swords-and-magic blazing into the fray, but in the later levels, a long tail soon forces you to consider every single movement, and exercise patience and deftness in equal measure. Moreover, each new character offers the opportunity to explore a trio of abilities, choose who you want to elect as party leader, and decide how best to level up the roster to survive. I covered the point to death in my article on gameplay tips last week, but it bears repeating: fans and newcomers to NimbleBit alike will be extremely impressed with the level of depth here.

Equally impressive? The company’s continued streak of gracefulness when it comes to integrating micro-transactions. In Nimble Quest, gems power the ability to level up heroes, buy upgrades for power-ups, and purchase all-important “play coins” (I’ll get to to these in a second). Each level doles out a healthy dose of the coveted diamond-shaped jewels, and by nailing every aspect of game design, you’ll find yourself “grinding” for more currency without even considering it. For those who want to save time and play on a field of super-powered items? There’s a gem shop where you can go wild with your real life wallet. Personally, I just threw NimbleBit $4.99 to snag the “red gem” purchase that litters the game with currency worth ten times the normal amount permanently. 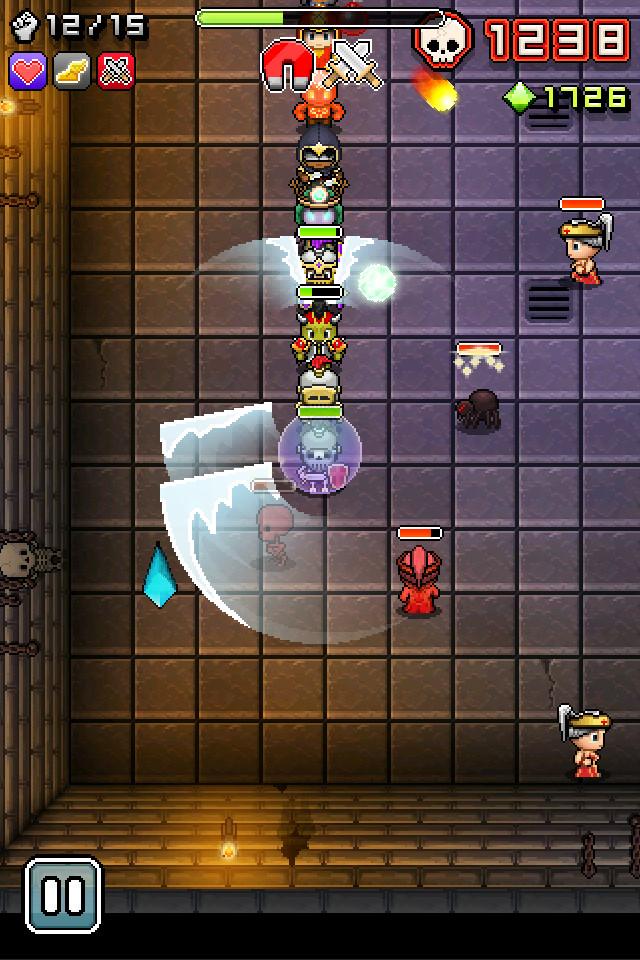 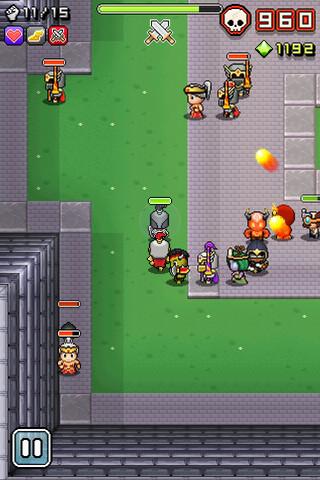 Where I can see backlash against the usually lauded team is with the game’s system of arcade-like “play coins.” Optional though they may be, the rare medallions power the ability to continue a round after death, add a new hero to your party at the beginning of a stage, or add status power-ups to your party for an entire play through. In some cases – like with the retries – subsequent purchases even become more expensive, and the whole arrangement begins to feel more aggressive than in any previous NimbleBit offering. And again, for a company who we’ve repeatedly said almost gives away its virtual currency, there’s absolutely nothing wrong with finding clever ways to encourage spending…especially in a free game. The plethora of spending options and pop-ups simply take a little bit away from the seamlessness of play in this case.

That blip aside, there’s a seriously potent fun factor to Nimble Quest. Leaving the Bitizens behind without hesitation, this game shows off NimbleBit’s mastery of the things that make bite-sized gaming tick, and blows the doors wide open on what we can expect to see from them in the future.  A future where – if we’re lucky – busses and bathrooms alike will come equipped with an iPhone with Nimble Quest pre-installed.