Nikopol: Secrets of the Immortals Review 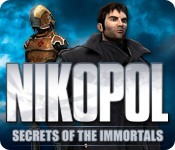 It’s always great when a game tries something new. And while Nikopol: Secrets of the Immortals is a fairly straightforward point-and-click adventure, it attempts to set itself apart from the pack through its setting and story. Based on the graphic novel series of the same name, Nikopol takes place in the not-too-distant future, and combines elements of sci-fi and fantasy to create something unique. Unfortunately, in this case unique doesn’t necessarily mean good, as Nikopol is definitely an uneven experience.

The game follows Alcide Nikopol, an artist living in Paris, who eventually learns that his father — who was previously frozen in some sort of space prison — is actually alive. So, naturally, he sets off to find him. The rest of the story is more than a little confusing, involving ancient Egyptian gods stuck on Earth because of a fuel shortage and an impending election where one of the candidates is an android. Oh, and there is a giant alien jellyfish trapped on a skyscraper.

It’s safe to say that the story in Nikopol is just a tad strange. And while this would normally at least merit some points for originality, in Nikopol it just adds up to confusion as you will rarely have any idea just what is going on. It’s extremely disappointing that such a unique world in premise is wasted on a story that is nearly impossible to understand, and filled with mostly uninteresting characters. Most of the time it feels like the game is just trying to be weird for the sake of being weird.

Of course, the confusing narrative would be excusable if the gameplay were solid. Unfortunately this area of Nikopol is very up and down.

The game plays out like a traditional point-and-click adventure: you view the world from a first-person perspective, talking to other characters, exploring the environment, and using various items to solve puzzles. The major problem with this aspect of Nikopol is the puzzles. Not only are they almost universally difficult, but the game gives few hints as to what you are actually supposed to do. And while this makes ultimately solving a puzzle all the more satisfying, it also makes the process of solving them incredibly frustrating. And this is doubly true in a world like the one created in Nikopol, where what makes sense to you doesn’t necessarily make sense in the context of the game’s world. Throw in some timed puzzle-solving segments and you have a recipe for at least a few hair-pulling incidents.

Where the game does excel is with its style. The gritty urban environment provides an interesting look at the future, as you’ll see flying cars contrasted by floating pyramids and odd religious imagery. This extends to the dialog, where some of the characters speak in a sort of weird, almost medieval dialect. Meanwhile, the cut-scenes are told through comic book style panels, a nice touch that alludes to the story’s origin on the printed page. But far and away the best aspect of the presentation is the menu. The process of using and interacting with items is smooth and streamlined, with a circular menu system that should definitely be adopted by other adventure games in the future.

In a genre where new ideas are few and far between, it’s disappointing to see Nikopol turn out so poorly. The premise and setting have so much potential, but are ultimately wasted on a baffling story filled with overly difficult puzzles. It’s not without its charm, and it certainly has some good ideas buried deep down, but it ultimately ends up as a game that is simply not much fun to play.

The Treasures of Montezuma 2 Review