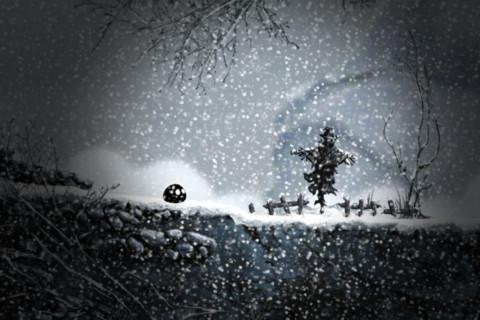 Like your average art school animation project… but genius.

Like any piece of art, a glimmer of truth can mean more to a game than slick presentation.  Have you ever stopped to listen to a street musician strumming away on his guitar?  He may not be a master of the instrument, but, occasionally, that street musician will play a song that moves you as much or more than any band you see at a big venue.  The musician may be a little rough around the edges, but the song they play resonates with you.  In a roundabout way, this describes how I feel about Nihilumbra.  It’s not a “sleek” game, but it says something,and it says it well.

One of the first things you will notice while playing Nihilumbra  are big white words.  Gameplay is king, but Nihilumbra embellishes its play with a strange and touching story that unfolds at the hand of a disembodied narrator, one who dogs you with self-doubt throughout your journey, asking questions like “What are you?” and making cruel statements like “You shouldnt be alive,” “You will never escape from this place,” and “You don’t belong out there.”

Which may be true.  The game begins with your avatar, a black blob, being born inside what is called the void, and dark and twisted place composed of nothingness.  Your first task is to emerge from this void into the world of the living — our world.  The first place you visit is a frozen mountain top.  There among the snow, you see a scarecrow and decide to take its form (searching for a brain, perhaps?).  Over the course of five worlds, you will encounter forests and deserts and restless volcanic lands, exploring each world and learning from it.  You love these new worlds, but, paradoxically each world you encounter meets an untimely end at your hand.  The void, which seeks to be whole, pursues you tirelessly, tainting each world with its creatures before eventually eating them up entirely.  Perhaps you don’t belong here?  This question recurs throughout the story, along with all the doubt and guilt associated with your selfish actions.

It must be said that the narration that communicates this story is marred by minor translation errors.  While I found them to be, for the most part, endearing, these mistakes are representative of other minor scratches on the finish of this otherwise wonderful game.  Some environments look spare and blocky when compared to others.  For the most part however, Nihilumbra is absolutely gorgeous.  In a time when 8 and 16-bit bit art seems to be the lingua franca of arthouse platformers, it’s nice to see lush, hand painted backgrounds.  Good looks of one screen make the jagged, rough edges of the next even more noticeable, though.  The UI also felt a tad clumsy.  There were times when I found myself stumbling over my own fingers to select the right power fast enough — a distraction from the game’s clever puzzles and gorgeously animated enemies.

Now that I’ve mentioned powers, I should probably tell you what they are.  Nihilumbra is not simply a platformer.  It’s a puzzle game that employs touch controls.  A flower at the beginning of each of the game’s five worlds grants your avatar the use of a new color.  When these colors are painted on the surfaces and platforms of each stage, they grant those surfaces different properties.  The blue you collect from the frozen mountain top casts sheets of ice across the ground allowing you to slip along more quickly, increasing the range of your jumps and even making ledges slippery and dangerous for your enemies.

These enemies, by the way, are awesome.  They remind me of the original Oddworld games.  They’re animated in a jerky, hand curated sort of way, and even though these baddies are undeniably threatening, they have a certain brainless innocence to them.  You almost feel bad killing them.  As far as atmosphere, I’m also reminded of the free indie PC title Glumbuster.  Both games share a somewhat morose, disjointed world that may depress, but also beckons you to explore. 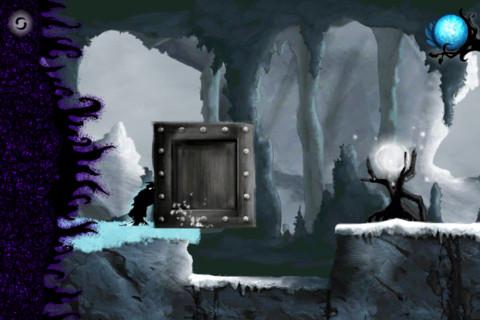 After beating the game’s main story, I was happy to discover a “new game+” mode.  I won’t go into the details for the sake of the story, but it allows you to play through every level again on a much harder difficulty, going so far as to introduce new enemies and mechanics.  There’s a lot here for the price.

Any gamer who enjoys platformers should not miss this one.  Anyone who appreciates a good story should play as well.  Despite the few nicks in Nihilumbra’s armor, I’m happy to give it five stars.  It is an earnest experience.  It might not be perfect, but it’s a fine example of artists using a medium to tell a story.  And it’s tons of fun too.