Home / Reviews / Nightmares from the Deep: The Siren’s Call Review

Nightmares from the Deep: The Siren’s Call Review 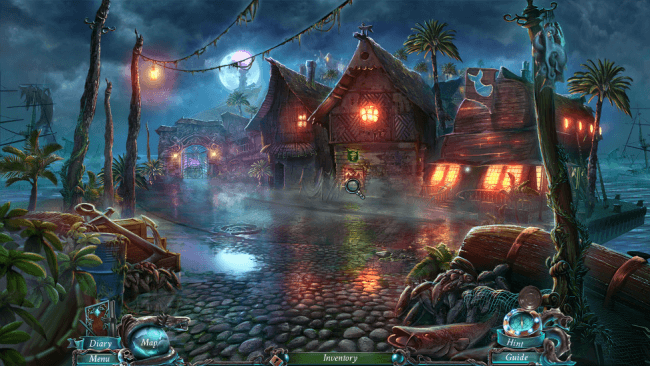 Even the word “epic” feels too drab.

Nightmares from the Deep: The Siren’s Call is a stunning game. It’s filled with action, suspense, a touch of intrigue, and so many interactive mini-games and puzzles that you’ll wonder how long your mouse hand can stave off fatigue. Wrapped around this is an exciting story that mixes mythology with modern characters, creating a game that catches you from the opening cinematic and refuses to let go.

Sarah Black is curator of the Caribbean Naval Museum. That sounds like a boring job, but as Ms. Black is quick to point out, she’s had quite her share of adventures, most of which are pirate-related. As she settles in for a “quiet” evening, someone dressed as that guy from the frozen fish stick packages buzzes at her door. It seems he has a crate only she can open. After examining the strange box, Sarah places a one-of-a-kind artifact on its surface, breaking the seal and revealing the Golden Octopus. As soon as its tentacles touch the air, however, a band of fish men break in, knock Sarah to the ground, and make off with the relic. That sounds like a call to adventure if ever I heard one!

Nightmares from the Deep: The Siren’s Call is an amazing ride. It’s an adventure game at its heart, stuffed with so much action you’ll wonder if it could have been made into a successful first person shooter. As you explore the terrain, you’ll come across handfuls of items to pick up and stash in your inventory. Objects in tow, you’ll be able to pick your way to new areas by solving puzzles that block the path. Most of these solutions require a mini-game to be completed, which you absolutely won’t mind doing, since The Siren’s Call features only creative, awesome mini-games.

Better still, other puzzles trigger small interactive scenes, livening up the usual stale click-based solutions. For example, most casual adventure games are content to automatically remove a burning log that blocks your path the moment you click on the water spigot. In The Siren’s Call, not only do you have to spray water on the fire, but you get to do it by jiggling the mouse back and forth, not just clicking. It doesn’t sound like a big deal, but once you see how frequent these interactive moments are, you’ll start to get excited at the prospect of new ones to come. 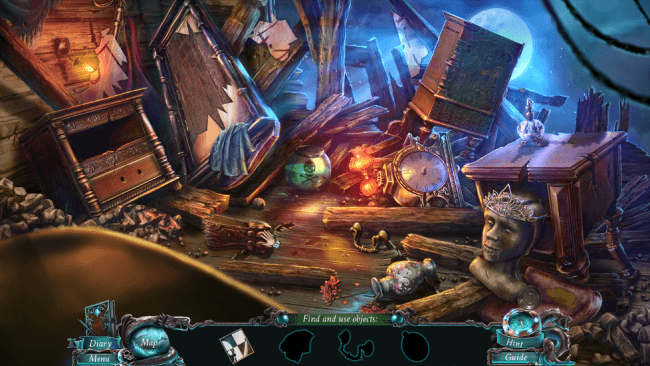 Hidden object scenes are just as dynamic as the rest of the game. You are given a very small selection of item silhouettes at the bottom of the screen. Using just the outlines, you’ll have to find whatever you can amongst the clutter, taking care to zoom in and examine the many objects around the screen. Sub-scenes have puzzles of their own that need to be solved, often introducing new items to find, or presenting even more puzzles to complete before the hidden object scene has ended. When it’s all over, you get an important item and are sent on your way.

Nightmares from the Deep: The Siren’s Call is the action movie of the casual adventure genre. It’s got dynamic cutscenes with slow motion shots. It’s got a giant octopus. There are corrupt characters and devious villains. There’s even a siren in a chariot aquarium. The puzzles and mini-games are suitably well-made to match the pomp, creating one of the finest and most exciting games this year.