Home / Reviews / Nightmares from the Deep: The Cursed Heart Review 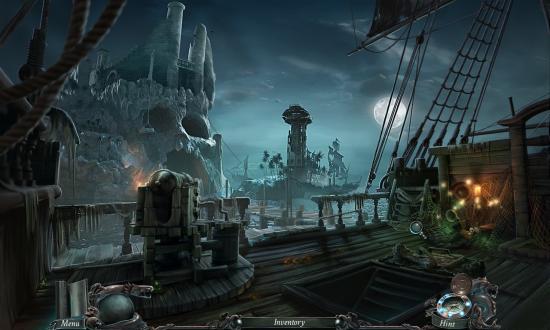 It’s a glorious thing to be a pirate king, or so I’ve heard anyway – but it’s not quite all that it’s cracked up to be in Nightmares From the Deep: The Cursed Heart, a new hidden object adventure that’s as broad as the sea but not nearly as deep – and that you can finish without actually playing a single hidden object scene.

It’s a common feature of films, television and videogames that characters get themselves into trouble simply by not paying attention to what’s going on around them. “Don’t go in there!” you shout at the buxom blonde on the big screen as she contemplates the wisdom of stepping into a pitch black room where a lunatic axe murderer almost certainly awaits. And when she does, and suffers an appropriately grisly demise as a result, we aren’t generally too sympathetic because hey, you should’ve seen that coming.

The same basic thing goes on in Nightmares From the Deep: The Cursed Heart. When the strangely well-preserved body of a centuries-dead pirate is dredged up from the bottom of the sea and delivered to the local maritime museum, the curator dresses it up appropriately to make it fit for display. But when the corpse begins exhibiting telltale signs of oddity – if you consider arcs of green lightning running across its skin as “odd” – does she stop? Of course not. She blithely persists until it leaps to life, kidnaps her daughter and makes off aboard his ghost galleon to his hideout on Skull Island! Yarrr! Ye shoulda seen that a-comin’, Billy!

It’s not the most sophisticated pirate tale ever, and The Cursed Heart suffers further from being unable to make up its mind about what it really wants to be. It lurches at random from moments of straightforward horror to bits of outright camp, driven by a story that aims for melancholia but falls well short. It’s silly, superficial, disjointed and dull.

But while the narrative is less than a treasure (even for a hidden object adventure), in terms of actual gameplay there’s a lot more going on. The Cursed Heart is a big game, focusing primarily on hidden object scenes but with a decent mix of puzzles and mini-games, plus a bit of conventional adventuring, to break up the action. None of it is terribly difficult, although a standard hint function will keep things going should a rough patch be hit, but there’s plenty of it to plow through. This isn’t a game you’re likely to finish in an afternoon.

It’s a fun twist for Mahjong fans, but a bit disappointing too. The Mahjong puzzles automatically reshuffle the remaining tiles if no more moves are available, meaning that you literally cannot lose; just keep matching pairs and the board will be cleared. It eliminates any potential frustration, but it also does away with the need for any kind of strategy, making it a simple exercise in pattern matching.

The hidden object scenes themselves have a pleasant, hand-painted look to them and are reasonably challenging but otherwise unremarkable, although the visual style lacks fine detail which can occasionally make it a bit tricky to pick out some objects. The rest of the puzzles, as mentioned, tend to be fairly simple, and a few even come with step-by-step written instructions courtesy of the in-game diary. 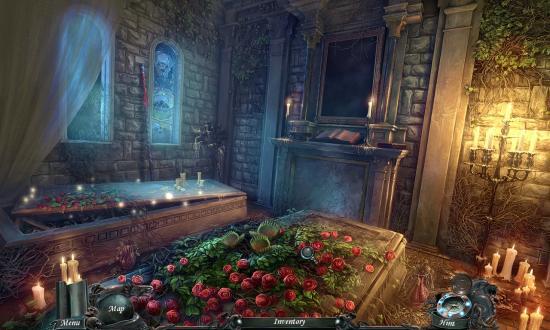 The Cursed Heart is a fairly impressive production, with attractive visuals, plenty of animations, a nice enough soundtrack and full voice acting. The voice acting itself is somewhat less than spectacular, with the lead character in particular sounding almost completely uninterested in what’s supposed to be a horrifying supernatural experience, but there’s not a huge amount of dialog so it’s never terribly distracting.

There’s also an awful lot of running around, and although the built-in maps make it easy enough to figure out where you’re going and also, on normal difficulty, keep track of which rooms have activities waiting to be completed, they don’t let you transit directly from one location to another. It’s an unfortunate oversight in a game that pads the action with so much back-and-forth between rooms.

The Cursed Heart has launched as a collector’s edition, and so includes a tangentially-related bonus chapter. Once both the main game and the bonus chapter are complete, you’ll also be given direct access to the game’s hidden object scenes, plus concept art, in-game video clips and wallpapers. As collector’s edition bonuses go, it’s a thoroughly unimpressive collection.

Nightmares From the Deep: The Cursed Heart is kind of like the old pirates of yore: What it lacks in finesse, it makes up for in brute force. If refinement and attention to detail are a priority, then it will probably leave you cold. But if what you’re after is a big pile of hidden object scenes and you’re not too particular about how it’s all tied together, this tale of tragedy on the high seas will fit the bill nicely.