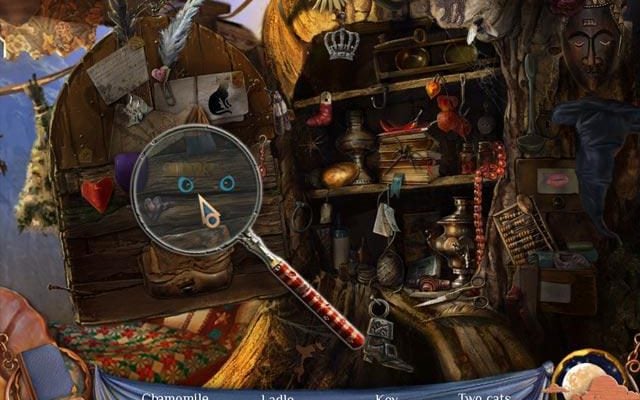 Nightmare Realm is an odd game. It looks like a fairly straightforward horror adventure, yet it’s set primarily in a colorful, almost lighthearted fantasy world. And while it never even approaches the horrific, it’s so thematically dark as to be one of the most disturbing adventures I’ve ever played – but also one of the most engaging , engrossing and outright entertaining.

Nightmare Realm begins with the death of David, the father of three-year-old Emily, in a car crash. That cheery opening sequence sets the tone for the entire game, as Emily – who’s on the cusp of turning seven when the story begins, four years later – finds herself spirited away by sinister, supernatural forces, leaving her still-grieving mother and uncle struggling to locate and rescue her from a corrupted magical realm. 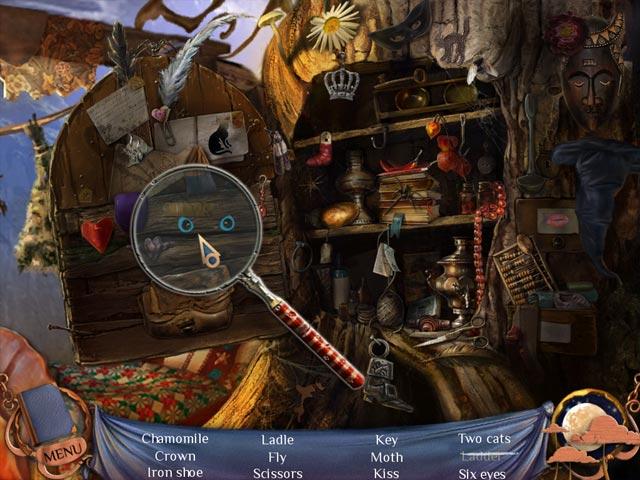 Story is an important part of Nightmare Realm but while it waves lazily at profundity, the truth is that it’s too erratic and nonsensical to say much about growing up and letting go beyond the fact that both are okay. It’s a good effort as far as it goes, though, and I have to admit that I found myself surprised at times that the game was willing to drive through those difficult neighborhoods in the first place, and even touched once or twice when it did.

Which isn’t to suggest that this is some sort of “After School Special” tearjerker. Nightmare Realm may not be a conventional, blood-soaked horror game but it does get seriously cree-hee-heepy in spots, and its overall tone and occasionally shocking plot twists are dark enough that I’d be hesitant to let young children play it unless you’re looking for some conversations about why awful things happen to good people on a fairly consistent basis.

The graphics are good throughout, with a colorful hand-drawn style that veers into excellence at times, particularly in the lush Witch Doctor’s valley. (You’ll know it when you get there.) The music is generally light and melodic, largely belying the “awful things happen” nature of the game, and while there’s no voice acting, neither are there any errors in grammar or spelling, save for one bumpy bit of dialog in the bonus chapter. And yes, there is a bonus chapter because this is a Collector’s Edition – and it’s a good one. 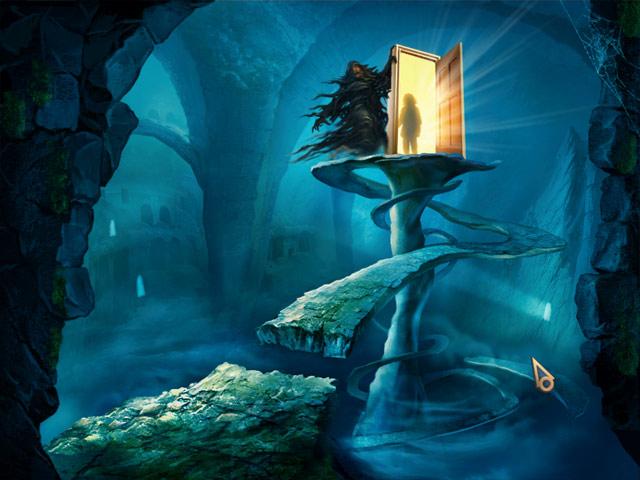 The CE extras include the usual wallpapers, concept art and soundtrack, which can actually be saved separately for later listening, something all such games should, but rarely, do. But the most interesting bonus is a step-by-step tutorial that explains how to create four pieces of origami that appear in the game. I’m not sure how origami is actually relevant to the story but 33 pieces are hidden throughout the Nightmare Realm and the more you find, the more extras are unlocked. Fortunately, finding all of them is quite simple if you’re paying any kind of attention at all.

The bonus chapter, meanwhile, takes place midway through the game and serves up an interesting and ultimately rather unpleasant twist of its own. It adds another hour to the leisurely three-hour running time and also manages to contributes meaningfully to the plot, at least as much as possible when dealing with such a convoluted and confusing tale. Compared to some bonus chapters that just tack on a few rehashed puzzles and hidden object scenes, this one is really worth playing.

Nightmare Realm isn’t flawless. The “movement zones,” where the cursor changes to a directional arrow in order to move from one location to another, are very narrow and occasionally ill-placed, making it a little too easy to accidentally click on the hint or menu buttons when you really just want to go somewhere else. Hardcore puzzle-solvers are likely to blow through it very quickly; the mini-games are fun and unique and the hidden object scenes are attractively-rendered but in terms of challenge, this game is definitely on the “easy” side of the scale.

And of course there’s that underlying darkness. I don’t want to spoil all the fun but I will say that this is the first hidden object adventure I’ve ever played in which a six-year-old girl says that she doesn’t want to grow up because she’s afraid that if she does, she’ll forget about her dead daddy. Yeah, it’s like that, and even the ending isn’t entirely happy. If you’re looking for sunshine and lollipops, you might want to look elsewhere.

But if what you’re after is a hidden object adventure that’s not afraid to toss some tough, if occasionally incoherent, ideas out of your monitor and onto your keyboard, Nightmare Realm is just the thing. The gameplay is relaxing, the story is intense and the two combined add up to one thoroughly remarkable gaming experience.