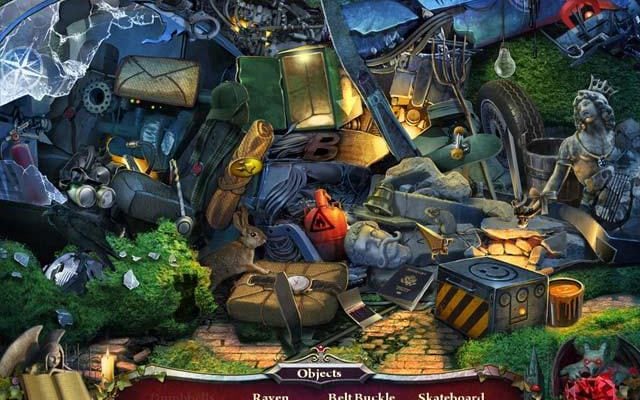 Nightfall Mysteries: Black Heart proves that even a good series can get a little long in the tooth

The Vansig family just can’t stop being evil, and they’ve come back for yet another round of dastardly shenanigans in Nightfall Mysteries: Black Heart, the third tale of the clan of no-goodniks and the helpless cheese-eaters who rely on you to put a stop to it. But despite the promise of simmering malevolence it’s actually a rather dull affair: a flat, faux-creepy adventure that achieves mediocrity and nothing more.

First things first: Nightfall Mysteries: Black Heart is not a disaster. There are plenty of hidden object scenes to work through and a number of mini-games of varying complexity to complete. It’s a decent length, coming in around the four-hour mark with the inclusion of the Collector’s Edition’s bonus chapter, and quite likely longer at the highest of its three difficultly levels which offers no help options. It did not set my computer on fire, nor did it leap off the screen and punch me in the face. I was able to start and finish the game without any technical difficulties or major gameplay hiccups. 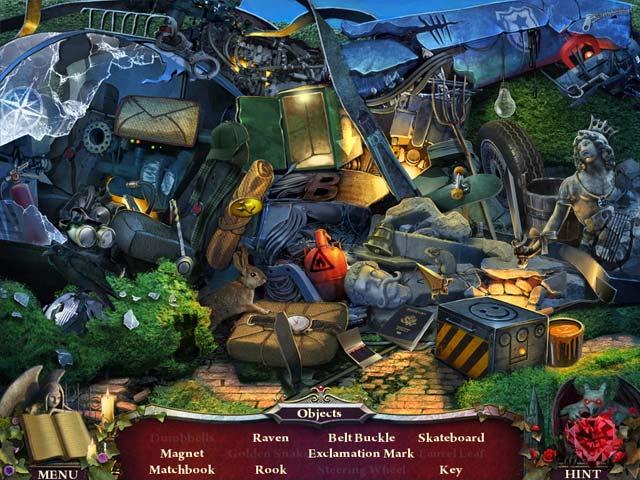 But that’s hardly a ringing endorsement, and Nightfall Mysteries: Black Heart does suffer from a number of issues above and beyond its basic functionality. The most immediate and obvious are the blocky, low resolution graphics, which give the game a rather dated and ugly look and at times even makes the on-screen text difficult to read. The brief animated sequences that pop up here and there are generally short and unimpressive, and the best of them – a crashing police helicopter – ends up looking rather silly because whoever drew it very clearly forgot to put people inside of the thing.

Things are similarly dull on the audio side of the coin. The music is inoffensive but completely unremarkable, and never feels connected to the on-screen action. And the voice acting is relatively plentiful but not overly compelling or enthusiastic. It doesn’t detract from the game, but it doesn’t add anything to the experience either, and it’s hard to take the elder Lady Vansig seriously as a world-beating villain when she’s rocking an accent that’s pure Frau Farbassina.

The gameplay in Nightfall Mysteries: Black Heart is passable, but nothing we haven’t seen before. The focus is on hidden object scenes, which offer a touch of variety by occasionally requiring that containers be opened or two objects be combined to make one, and while the poor graphics don’t hinder the HOG scenes, they certainly don’t help to make them any more enjoyable, either. Most of them are uncluttered and fairly simple, and some repeat, as do some of the objects used in them, lowering the challenge bar even further. 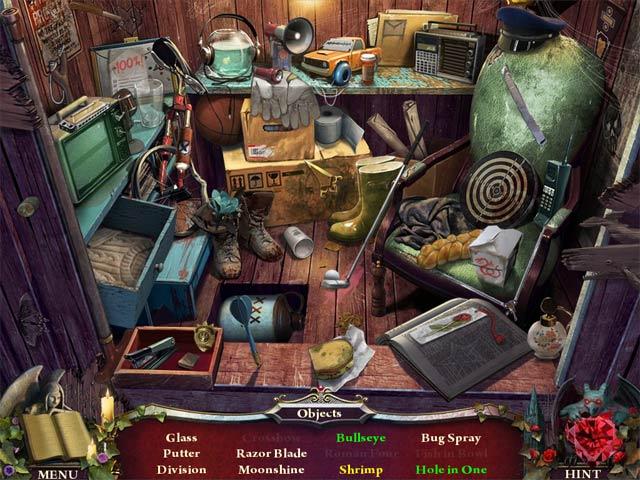 The mini-games tend to be relatively easy as well, although there are a few later in the game that will present a more formidable challenge to your patience. Unfortunately there are also at least two that appear broken and simply cannot be solved, even when using the solution provided by the built-in strategy guide. Puzzles can be skipped so it’s not the end of the road, but it is frustrating. So is all the inevitable running back and forth across the Vansig estate grounds. The map makes life a little easier by indicating which rooms have objectives to be completed, but you can still expect to do a lot of backtracking.

And worst of all, it’s boring. That’s an entirely subjective statement, I know, but the truth is that Nightfall Mysteries: Black Heart is like a high school math teacher who’s been teaching the same material for 30 years. It hits all the usual points but does so without any passion or even notable effort. It’s a lackadaisical application of formula, and it shows.

Nightfall Mysteries: Black Heart is at launch only available as a collector’s edition, which means a post-adventure bonus chapter, wallpapers, concept art, soundtrack and direct access to the game’s hidden object scenes and puzzles. Just finishing the game isn’t enough, however; you’ll have to discover the “opera masks” hidden through the game in order to unlock it all. Finding six masks grants access to the concept art and music, while 12 masks unlocks the puzzles and hidden object scenes.

The previous Nightfall Mysteries games, Curse of the Opera and Asylum Conspiracy, were both critically well-received, but the series doesn’t appear to be aging well. Nightfall Mysteries: Black Heart isn’t awful, but it feels outdated and disinterestedly half-baked. With so many better choices on the market, there’s just not much reason to bother with this one.