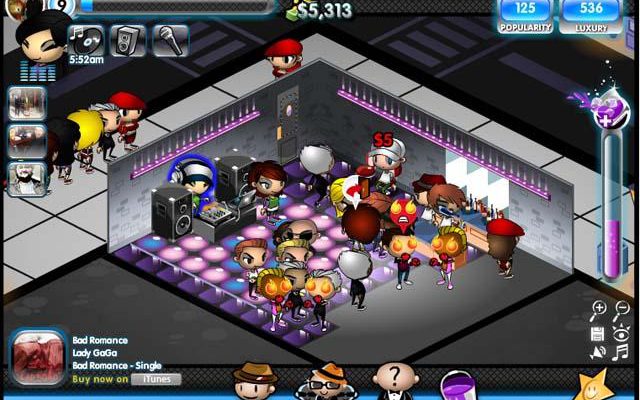 The most impressive thing about Nightclub City, at first glance, is that it is not recognizably a clone of anything. A lot of its features aren’t too uncommon for social games (with one exception), Nightclub City packages them together in an entirely new way. As the name implies, Nightclub City is a game about running a virtual nightclub that’s got the potential to become much deeper than most of its Facebook competitors. As you improve your club’s luxury and popularity levels, you’ll begin attracting more lucrative types of customers.

Another marvelous thing about Nightclub City is that it’s neither too simple nor too complex to just pick up and start playing right away. Sessions aren’t too long or dissatisfyingly short, while there is neither too little nor too much complexity to deal with at the beginning of the game. This is a game that, thus far, is the very definition of “just right.” You play DJ music sets to attract people to your club, make money by running a bar, and increase your club’s earning power by customizing its appearance with an excellent range of virtual goods. You even get to customize your average to serve as the DJ. 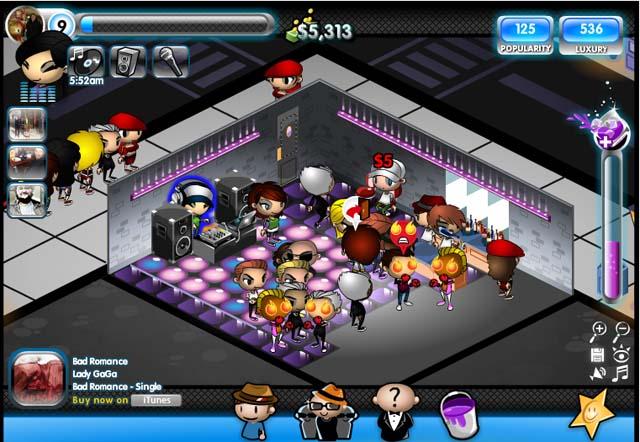 The music component of Nightclub City is by far the most unusual for Facebook and deserves a bit of detailed discussion. You earn money by playing a music mix that lasts about fifteen minutes. You don’t get to control which songs are played in the set, but do get to play one of three types of music (electronic, hip-hop, or pop. The set doesn’t play full songs, but instead a mix of brief 30 to 45 second clips of various songs smashed together. This can have a wonderful effect if it’s a good mix of songs, but can also be unbearably annoying if something irritating gets into the mix. 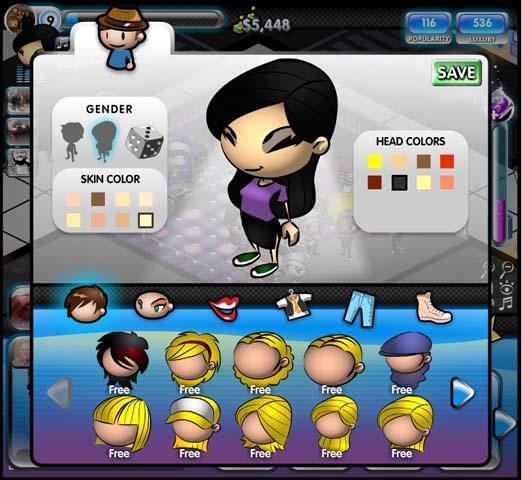 The chance to listen to a lot of different songs in various mixes encourages much longer play sessions than other social games. The mixes seem to change from day to day, so it can be fun to listen to each day’s mix for each genre before logging off to do something else. The song mixes strive to blend new songs with older hits, but sometimes lean too heavily toward vintage or obscure music that you probably wouldn’t hear played in an actual club. This is a minor complaint at best, though, and something sure to change as the game expands. 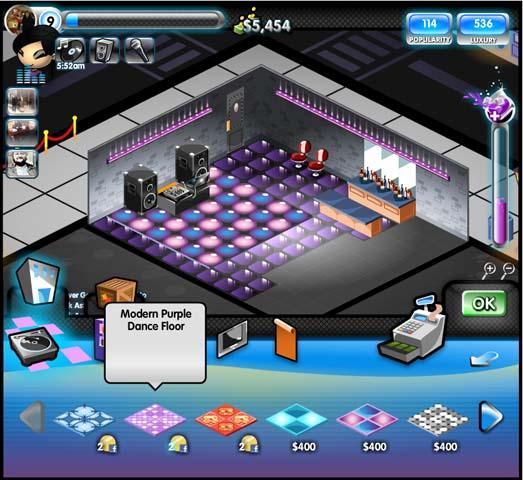 The worst thing that could be said at this point about Nightclub City is that it could use some more content in certain key areas. More avatar fashions, more nightclub decorations, and more music mixes in more styles would add to the game’s sticky factor tremendously. As it stands, though, Nightclub City is by far one of the most interesting new social concepts to hit Facebook this year.