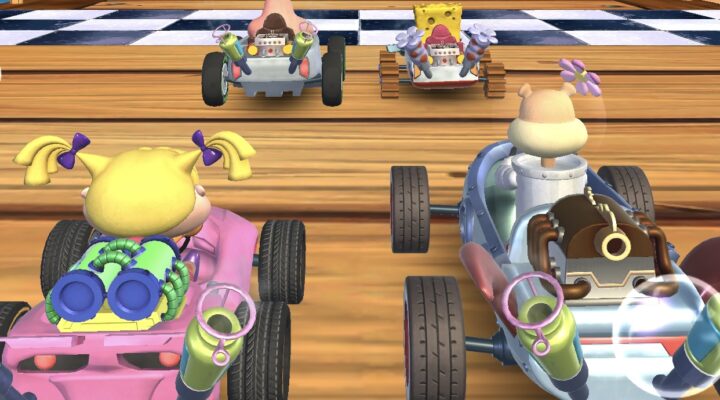 Nickelodeon Kart Racers sets its stall firmly in the tap-to-race stable of mobile gaming. The focus here is on timing screen presses, rather than finding the perfect racing line or shooting your opponents with bombs and traps. It’s slick, and it’s entertaining, but it doesn’t quite capture the frenetic buzz of the best kart racers.

The game sees you playing as a famous face from a Nickelodeon cartoon – there are a bunch to collect, and you start off as SpongeBob. Each race is a collection of taps – meters pop up on the screen and you need to poke when they’re in the green to drift or jump.

You can also tilt to change your position on the track, collecting coins and hitting boost pads, and you’ve got a special goo blast that you can power up to give yourself a sudden burst of acceleration.

There is a sense of speed here, and some thrills when the racers are packed together and you need to hit each tap perfectly to make sure you keep in the lead. But other times you’ll streak out into the lead and never see another kart again, or lose the lead and never have a chance to get it back.

You can upgrade your kart as you play, sticking more powerful parts in to give you an edge, and various rewards and currencies waiting to be collected as well. There’s always something to do, whether it’s single player races or taking on other players, but the game does get a tad repetitive.

Nickelodeon Kart Racers does what it sets out to do, and it does it well. It’s at the top end of the casual grading curve, and there is fun to be had. It’s just a shame that it lacks the heart-pumping thrill that can make kart racers so compulsive.