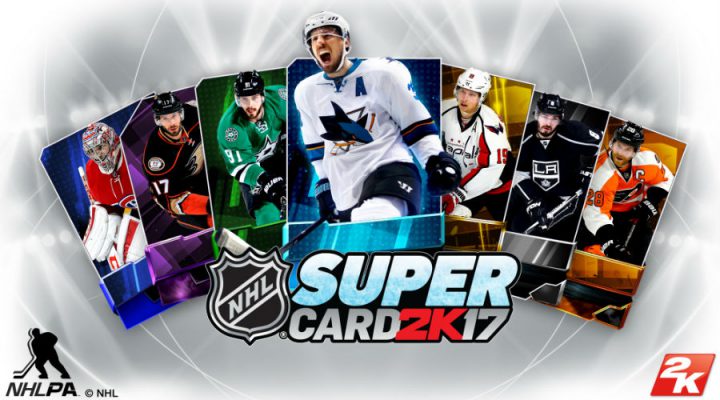 Easy way to get into the latest NHL season in card-based fashion.

Gameplay designed for quick sessions without many restrictions.

No real compelling reason for this to be a standalone game instead of an update.

Have to wait for events and other fun features.

If you enjoyed NHL SuperCard but were bummed that it didn’t keep up to date with the latest player movement in the real life NHL, we can say with a great deal of confidence that you will enjoy NHL SuperCard 2K17.

The reason for our self-assurance is that at least at launch, NHL SuperCard 2K17 is more or less the same game with a fresh coat of digital paint and brand new cards to reflect the pro hockey season that recently got underway. Whether you think that’s a good or bad thing is going to largely depend on how much you like the formula that 2K is using for all of its SuperCard games, which hasn’t changed much over time.

Of course every SuperCard game is someone’s first, so let’s assume that’s the case here. NHL SuperCard 2K17 focuses on building the best possible team of real life NHL players presented in card form. Each player card has four stats — Focus, Playmaking, Stickhandling and Skating — and can be one of a handful of different levels of rarity. In general, Epic is better than Ultra Rare, which is better than Super Rare and so on. 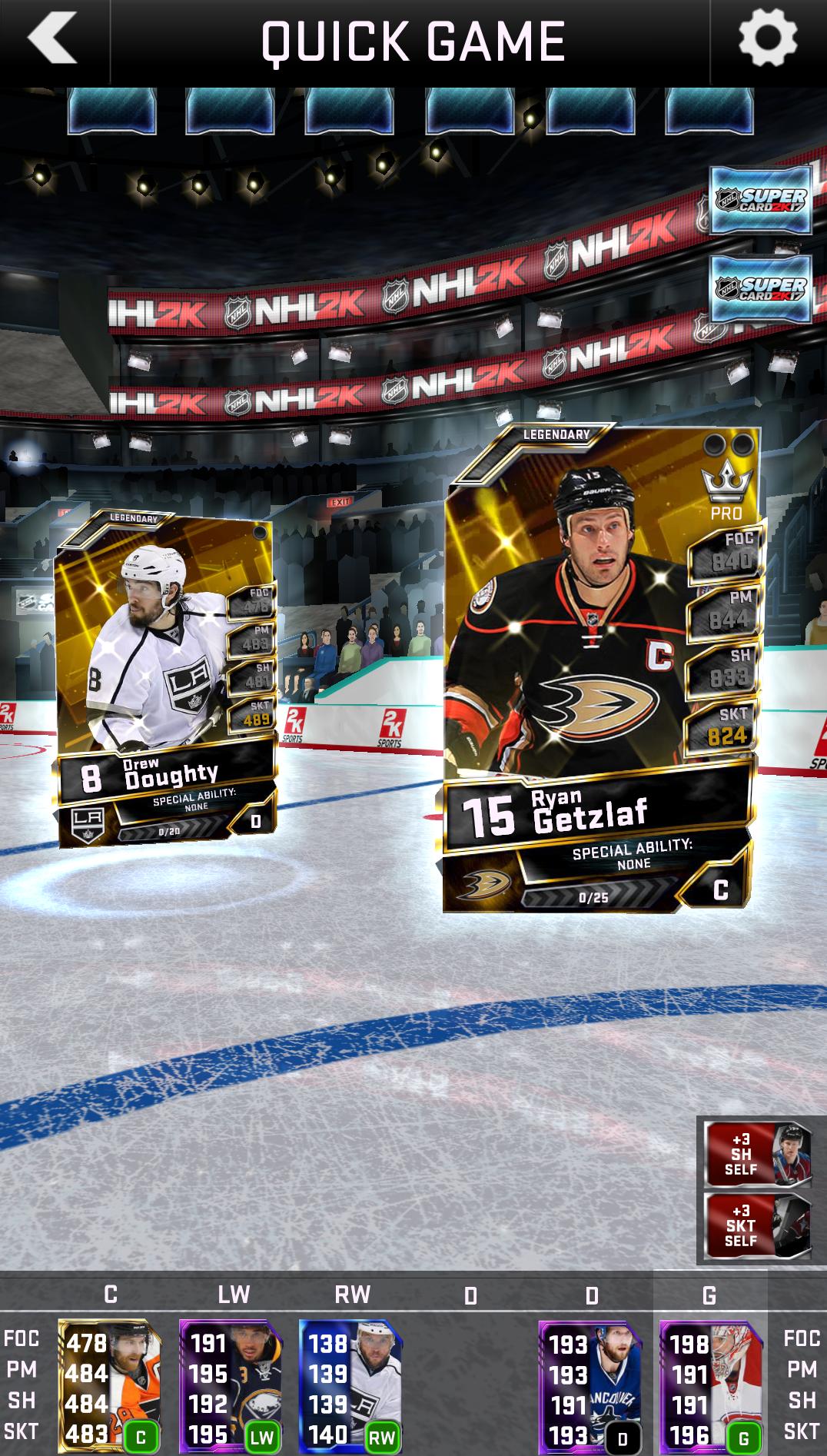 While you begin with a few decent players from your favorite NHL team, the entire league is your cupboard when it comes to cooking up a better team. New cards can be won after each game (or by buying them in packs as IAPs, though that isn’t nearly as highly emphasized here as it is in similar mobile sports games), and any player can be improved by sacrificing unwanted cards to level him up in a mechanic as old as mobile gaming itself.

The actual gameplay in Quick Game mode breaks down into a series of challenges, one for each period of a hockey game. You have to pick a skater, two skaters or a goalie and a skater for each one, and are told what stat or stats will be used for the challenge. Support cards can also help buff your players or debuff your opponents, but once the choice is made, the numbers are all that matters. However there is an extra layer of strategy based on seeing what players are used by the AI and trying to determine if there still might be better ones in reserve for later periods. 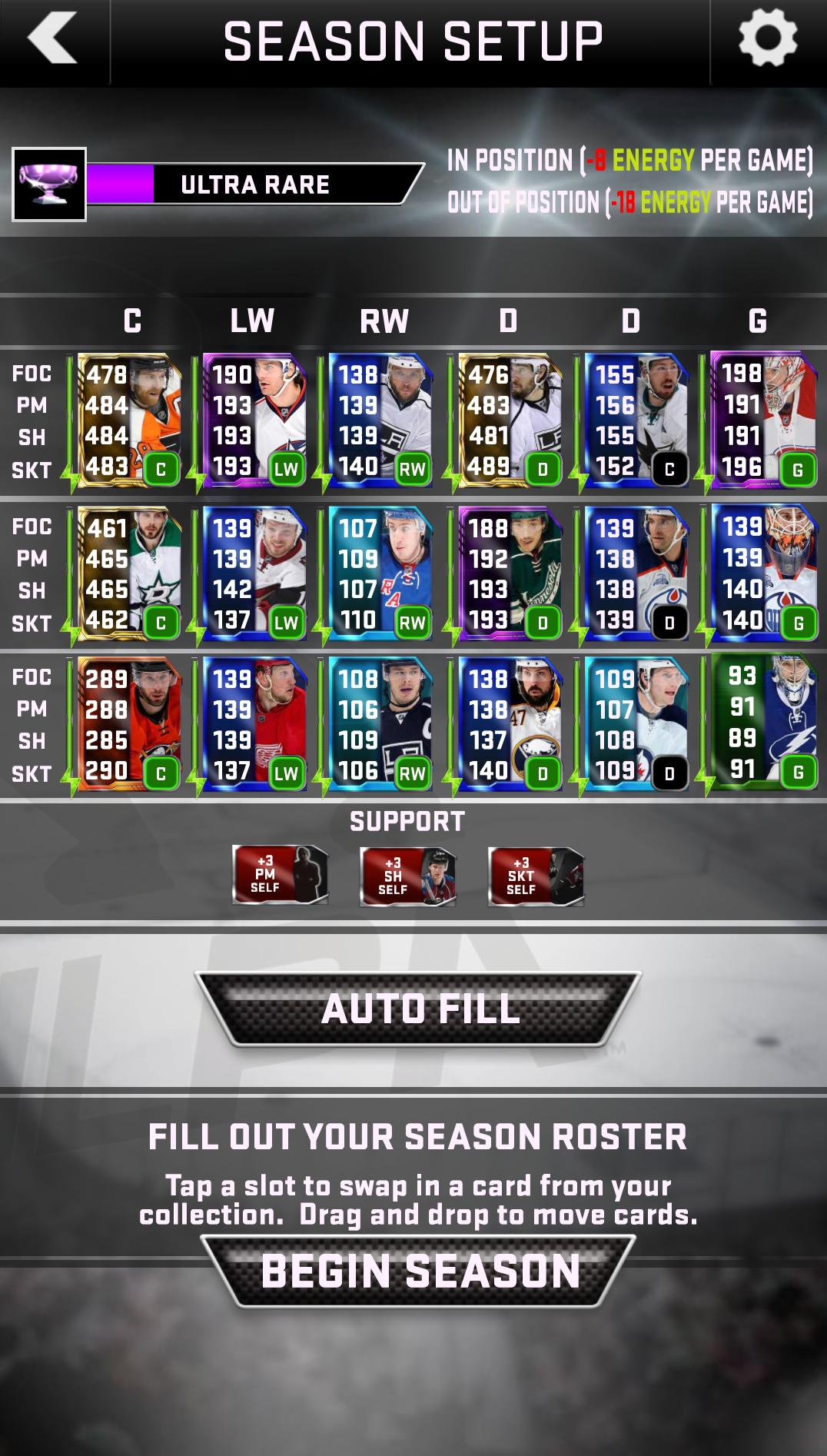 There’s also a Season mode which requires you to put together a larger team to face the rigors of a complete 82-game season. The individual games play out automatically, so it’s a mode that goes on largely in the background. What is required of you is to manage the player’s stamina, which you can boost by winning Energy cards in Quick Game mode, so there’s a natural synergy between the two. The one big drawback is that Season games are played round the clock, meaning you’re bound to have some tired players during the graveyard shift.

It should be noted that the cards actually play hockey, with animations and sounds that elevate NHL SuperCard 2K17 above many other card-based sports games. Unfortunately, if you played NHL SuperCard, you’ve seen them all before.

In fact you’ve seen all of this before, and while 2K has already proven its ability to give the SuperCard games fun events, none of them are in this game at the moment. It’s like you’re saying, “Hey download this now, and we promise it’ll get better and more engrossing over time.” That can be said about plenty of mobile games, but rarely as blatantly as you see here.

Add in the disgruntled feeling that NHL SuperCard players are likely to have when they see they have to start all over with their teams for the new season and it’s tough to give the game a full-throated endorsement for either new or returning players. If you’re a diehard NHL fan, you’ll likely find enough to like right away to warrant a download, but it’s probably not a bad idea to form your final opinion of NHL SuperCard 2K17 later in the season when it’s more fully realized than it is today.