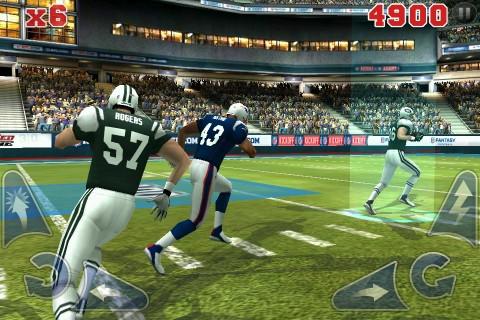 After an 8 month hiatus, the threat of a lockout, and a summer of Canadian football to try and hold us over, the NFL is finally back. Tonight marks the kickoff of the 92nd regular season, and all of your favourite teams and players ready to hit the gridiron. But instead of just watching your favorites, wouldn’t you rather be on the field alongside them? If so, NFL Rivals is the game for you.

Rather than offering a straight up football simulation like EA’s Madden franchise or Gameloft’s NFL series, NFL Rivals offers an arcade-style twist that puts you in control of a single player as they attempt to run for a touchdown. Running through different sections of the field will earn you extra points, and you’ll need to juke, spin, and run past the opposition to make it to the end zone and move on to the next challenge. The game also offers a Defensive mode, where instead of running for a touchdown, you’ll be in charge of tackling the ball carrier on the opposing team before they score.

The gameplay is smooth, fast, and plenty of fun. You’ll use tilt controls to guide your player’s direction and speed, and there are on-screen buttons on the left and right to let you perform all of the actions you’ll need. Heck – if you manage to get near the end zone without an opponent on your tail, there’s even an option that lets you showboat. It’s everything you love about football without all of the cerebral elements and teamwork of a traditional pigskin sim – and it controls beautifully.

As the season goes on, the waves of challenges get more and more complicated. Soon the field fills up not just with opposing players and scoring patches, but obstacles to jump over and truck under. In the end it starts to feel less like football and more like a lost episode of ABC’s Battle of the Network Stars, but as an arcade-style sports game, we can’t help but feel that’s a good thing.

At the point, everything I’ve said should sound familiar to Backbreaker Vengeance 2 fans. In reality, the game is little more than a reskinning of Vengeance 2 with fresh levels that let you sport the uniforms of your favourite teams and play in real world stadiums. For a lot of gamers, just adding that extra layer of NFL license will be enough to take an already great game and make it even better. But NFL Rivals manages to do slightly more than that thanks to a unique take on level selection. 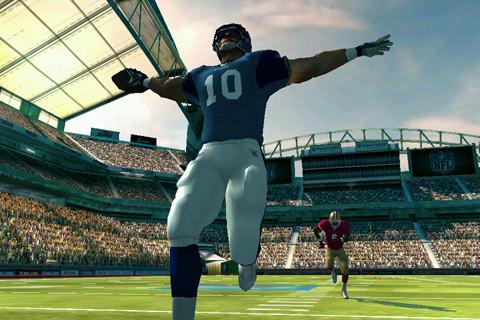 Instead of simply facing wave after wave of offense or defense, you’ll pick your favourite team and play through their entire 2011 season. In my case I went with the Seattle Seahawks – a delightful underdog that I fell in love with last year as they managed to make it all the way to the playoffs. The first opponent that NFL Rivals dished up for me? The 49ers – a game that my team will have to hop on a plane and play this very Sunday.

In addition to adhering to the schedule, everything you do in the game will earn your team “NFL points.” These get added to an overall pool that everyone playing NFL Rivals contributes too, so you can see which team has the most active/accomplished iOS gamers for fans. Better performance in the game will net you more points, but then again, so does everything in the game. Putting your name on your jersey, sharing things on Facebook, rating the app – every little bit is worth a point or two.

Teaming up NaturalMotion with the NFL was a stroke of genius. This is a developer with a proven track record for football fun, so it’s really a win-win scenario for everyone involved. Fans of the Backbreaker series might be a little disappointed to find that this does little more than retread old ground, but at the same time, it’s hard not love playing Backbreaker with your favourite NFL franchise. If you’re a fan of arcade style football, pick this one up – and let’s all pray the NHL gets the same idea with Icebreaker Hockey.