The Replacements, or replacement refs?

For console gamers, there’s a Highlander situation when it comes to NFL football games. There can be only one, and it’s Madden. Mobile gamers have some more choices, however: one of which is NFL Pro 2013 by Gameloft. Now available for iOS devices and headed to Android soon, it tries hard to find paydirt in a genre living in one game’s shadow. Mostly, though, it ends up like Carson Palmer quarterbacking the Raiders: Erratic and potentially expensive.

At the very least, you don’t have to give up anything for NFL Pro 2013 right away. It’s free to download, and can get you calling plays for your favorite NFL team in a matter of minutes with a short tutorial mode. As it should be on a touchscreen, selecting an offensive play or defensive set is simple, requiring only a couple of taps. Once the ball is snapped, the controls are all right on the screen. Player movement is done with a virtual thumbstick on the left side, with buttons to tap for various actions on the right. There are some nifty game mechanics on both sides of the ball, like a meter you fill to help defenders free themselves from blockers and the way you can shake your phone or tablet to juke when running with the ball. The stick is the one big hurdle, as it’s not always as responsive as you’d like when trying to cut or change directions quickly.

That’s not the only issue out on the gridiron either. The first-person view for passing works fine, but your receivers often build up momentum and can’t stop as they run for the ball. That can lead to some downright silly scenes, as team members are coming back on hook routes, only to suddenly head in the wrong way after the catch. The AI could use an upgrade as well. There’s nothing wrong with the computer’s play calling, but it must have graduated from the Andy Reid School of Clock Management, as it refuses to call timeouts even when driving for a game-winning score.

Another persistent annoyance is how hard you have to work to get a full playbook. NFL Pro 2013 starts you on the first of your string of mini-seasons with just a handful of runs and passes and only two defensive formations. You can unlock more with the in-game currency, Credits, but that takes a while. Plays can be “rented” for a whole game or even just for one particular down, though that costs Credits too. Credits are earned as you level up and win games, but the goal, of course, is to get people to buy them for real money, and in this respect, the game simply feels greedier than most.

The leveling system also allows you to increase the skills of individual players, who are rated in a half-dozen traits that vary by position. It’s worth noting that while the game has an NFL license, it doesn’t have one from the NFLPA, so the player names are close but not quite the real thing. I decided to use the darlings of the 2012 season, the Arizona Cardinals, and found that my star wideout was Larry Supsgorald and oft-injured running back Beanie Wells had become Beanie Springs. In a way, it is cute, but feels oddly like a half-measure on the game’s part.

There’s more you can mess with, including a series of stadium upgrades to unlock, each giving your team different bonuses. That’s if the amount of Credits needed doesn’t get you down, or the fact that the number of games you can play at one sitting is limited by that most accursed of social/mobile resources, Energy. And wouldn’t you know it, you can buy more of that for Credits if you simply can’t wait for it to refill. 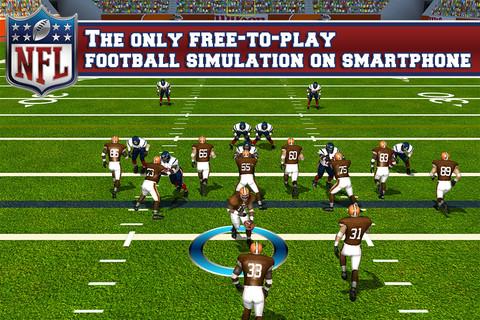 Nicer things can be said about the game’s presentation. The NFL logos and uniforms are rendered nicely, and though the players look a little stiff at times, there are an impressive number of animations for tackling, catching and other actions. Audio features include an announcer and some good on-field sounds. There’s also music in the game menus, but the less said about the repetitive tune and it’s “Hey! Hey!” chorus, the better.

You could do worse than NFL Pro 2013, and if it had the field all to itself the way Madden does in the console market, it would probably be downloaded by just about every football fan with a mobile device. But since it does have competition, gamers are going to want to shop around before deciding if this is the way they want to get their daily dose of pigskin.

Lord of the Dragons Review