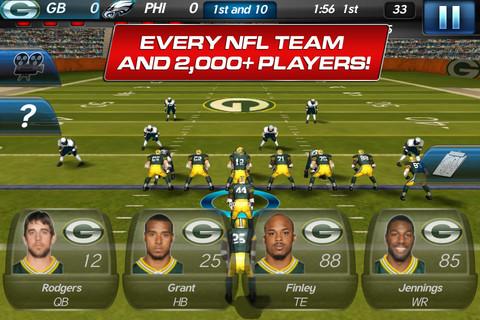 Just a little bit better than the Colts

Football has taken over baseball in recent years as the most popular sport in America, enrapturing everyone in the passion, hard hits, and amazing athleticism of its players. Gameloft has released a freemium NFL football simulation, NFL Pro 2012, to try and ensnare players that love the game of football. Unfortunately the freemium model, when combined with the game’s many other flaws, makes NFL Pro 2012 a game most football fans will want to leave on the sidelines.

The freemium model is set up as follows: You get a number of “credit points” that you can spend on stadiums that give player upgrades, and most notably, on purchasing play packages. Want to play man-to-man defense for more than just one game? That will be 50 credit points for the privilege. You want to some blitz packages? That’ll be another 150 credits. Want to get fancier? Dime, Nickel, Quarter, 4-3, 3-4, etc., are going to cost you additional credits. You can earn these credits by playing the game, but they accrue at such a slow rate that you are going to be forced to purchase credit points if you don’t want to play Cover 2 defense all game.

Not that it would matter if you did or not. The defensive AI, in short, is garbage. If your pass rush does not get to the quarterback quickly, you might as well set down the phone and wait for your turn on offense. On a third and long situation, I decided to play a very conservative cover 4 zone defense, sending three pass rushers at the quarterback. They were wildly unsuccessful at bringing any pressure, giving the QB plenty of time to throw. That the opposing team completed a pass and got a first down would have been understandable—that my safeties and corners were nowhere to be seen downfield and allowed a deep pass for a touchdown was unbelievable. Routinely this will happen on defense where the AI will break, having defenders stay completely motionless and allowing an insane amount of points to be scored.

The poor AI can be exploited routinely on offense. In one game, I didn’t pass the ball once. I just ran the ball with an HB play over and over again with great effect. The defense never learned what I was doing, and adjusted with blitzes or more men in the box. I won that game by never throwing a pass.

Passing itself is good enough. You are guided by red, yellow and green indicators to show which receivers are open, but for the most part if you lock on to a receiver you can throw it to them regardless of the color being displayed. In fact, I usually had just as much success throwing to a “covered” receiver as I did an open one. The ball’s position in the air rarely made much difference in whether or not the receiver would catch it—he either was or he wasn’t. The ball could be 5 feet to the left, but the receiver would magically suck it into his body.

There are some other annoyances with the game, and it mostly speaks to a lack of attention to detail. Playing with my hometown Lions, the game places Jahvid Best as the Lions back-up running back (as opposed to to Jerome Harrison)—and gets his number wrong (#22 instead of #44). Other small issues include having Matthew Stafford hold field goal attempts instead of Shaun Hill, the Lions back-up. I would have to imagine these little issues are peppered throughout the other NFL teams.

I can appreciate the challenges of creating a simulation football game for a mobile, touch-screen system. Aside from the lack of attention to detail, NFL Pro 2012 is more an indictment on the platform itself rather than the ability of the developers. The freemium model, however, makes the game as vanilla as it is broken. Who wants to call the same play over and over again? Why do I need to shell out cash to call a play? Charge me for the game – don’t nickel and dime me so I can play nickel and dime defense.