By Harry Slater | 12 months ago 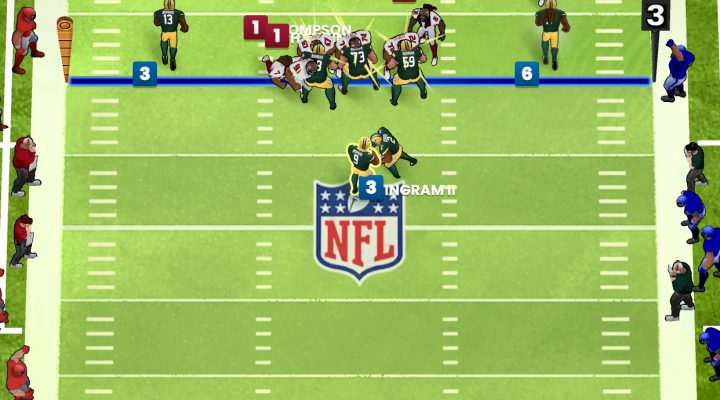 The ideas don't quite mesh

Can get quite dull

NFL Clash takes the shape of a football game and then wraps it around some specifically mobile ideas. It’s essentially a scrimmage meets a game of Clash Royale. And it’s pretty entertaining, for the most part.

Matches take place over a handful of minutes, and you get four downs to work the ball up the field before turning it over to your opposition. Before each snap you select your style of play, then drop in players, represented by cards, to perform it.

Different players have different skills, and you can upgrade them by collecting duplicate cards. With this being a PvP game, it’s no good just picking a runner and a blocker and hoping your opponent doesn’t notice your plan. You need to throw in some bluffs as well, dropping in wide receivers to throw them off the scent.

Alongside the PvP heart of the game, there are single player challenges that let you test your skills and earn rewards. Every win, whatever mode you’re playing, gets you a chest, which contains new cards and coins to upgrade them with.

Everything moves at a decent pace, but once a play is in motion there’s nothing you can do but wait for it to come to an end. There’s an energy system for your cards as well, which means you can’t just throw all your powerful players in at once. You need to think about the unit that’s going to perform the best under the circumstances.

The stop-start nature of football doesn’t quite fit with the rhythm of the midcore MOBAs that NFL Clash is trying to ape. There’s something tense about watching your energy bar refill before unleashing an onslaught of troops, but here you’ll often run out of time and have to snap off a play with a set of players you’re not happy with.

There’s fun to be had in NFL Clash, and the collecting aspect of the game is definitely going to appeal to some. But the underlying gameplay lacks any real spark, and after a while you’re going to lose interest in its simplistic interpretation of football.

Doors: Paradox Review – When is a Door Not a Door?