By Chuck Miller | 14 years ago 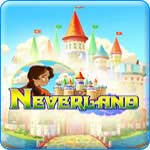 Neverland is not your typical hidden object game. At least, not as far as its narrative goes. What begins as an enjoyable toy-filled dream takes a slightly demented turn almost immediately. Think of it as Fractured Fairy Tales (from The Rocky and Bullwinkle Show) meets the Brothers Grimm with a dash of Lemony Snicket on the side. It’s not frightening, just slightly disturbing – but in a good way.

As the whimsical story unfolds, Diane, our heroine, longs to rediscover her youth in the make-believe land of Neverland. When, suddenly, she’s transported back again. Is it a dream or is “Dee Dee” reliving her childhood? Whatever the case, your goal’s to assist her in recovering an immense collection of lost toys, a seek-and-find menagerie of hippos and helicopters, cats and carrots, bears and bows, dogs and dolls, and dozens of other playthings in a world needing to be set right.

Exactly what is Neverland like? Well, it’s a cartoonish landscape comprised of 25 seek-and-find, kaleidoscope-like levels spread across 31 varied locations. And, it’s all tied together via an interesting, well-written and beautifully illustrated cartoon-strip storyline.

It also packs in some elements unique to the hidden-object genre. Each level or setting is alive with motion. Rather than a list of static objects to retrieve, the toys being collected are actually animated and begin to “talk” and “dance” when they become bored. You can get them to settle down again with a special power-up if you wish, but it all adds life to the usually static screens presented in other hidden-object diversions.

Further, some of these toys ask you for items. For instance, a teddy bear may request a toy car, ribbon or bell. Find and drag the solicited object to them, and they’ll reward you with a bonus – a piece of a hint or power-up. Yep, bonuses are earned one piece at a time in Neverland and consist of hints and the pinwheel and whistle power-ups. Earn four pieces each and you have an extra bonus item. In addition, some bonuses are hidden. Finding one of the required objects or retrieving a requested item may reveal a piece of a bonus.

Since most levels are not timed, it pays to take your time completing them if you’re running low on hints or power-ups. But, don’t randomly click objects, as there’s a penalty. Bubbles will appear and block your view. However, should that happen, simply pop five bubbles and the rest will burst.

How do the bonuses work? Hints help you locate hard-to-find items. Use one and a ring of stars will zoom in around an object and circle it for a moment. Whistles calm bored toys. When they begin to dance and talk, use a whistle and they’ll settle right down. As for pinwheels, they provide a momentary bonus that allows you to locate multiple toys at once. While active, the pinwheels next to each toy on the list spin faster and change colors as you get closer to the corresponding item.

You’ll also come across a few mini-games during play, some more fun than others. The Projector challenges you to move three red knobs up and down until an image comes into focus. But, while you’re doing so, several very annoying animals keep appearing to jump on the knobs and thwart your efforts. Another involves screens of items that fade in and out such as coins or teddy bears. Click when visible to collect them. Finally, there’s a conveyor belt of moving objects and a Jell-O trampoline that require you to click on listed toys as they move along or bounce up and down respectively. Fortunately, you can skip these games if you prefer (recommended for the Projector).

Neverland offers a unique, inventive twist on the hidden-object genre, packs a truly worthwhile and engaging narrative and features excellent production values, as well as a somewhat frantic feel without the use of timed play. Its world is quirky, mixing music reminiscent of animated cartoons from the early- to mid-1900’s with a somewhat “demented” storyline in a world where toys talk and dance. It’s strange, but in an entertaining way.

Unfortunately, this quirkiness doesn’t come across in the game’s description, so it could be a big surprise to some folks expecting a more traditional experience. There’s also a bit too much repetition in the game, limited power-ups, only one play mode and, occasionally, the pinwheels just don’t work.

Still, Neverland succeeds brilliantly in its own peculiar style. Hidden-object fans will love it, especially those with their own idiosyncratic ways.