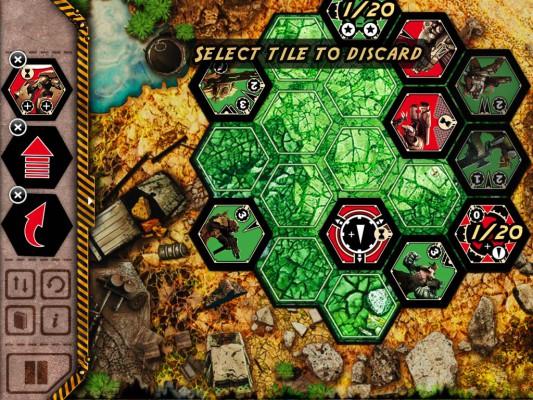 Back in September I reviewed Neuroshima Hex, which is a fantastic little hex-based strategy release based on a popular real-world board game. Now the developers at Big Daddy’s Creations have followed up with Neuroshima Hex Puzzle, a game that does away with the battles and the AI opponents and leaves the player to use the same rules and pieces to work their way out of pre-set jams. It’s a strategy game meets puzzler!

In the regular Neuroshima Hex you square off against an AI opponent for control of the battlefield. In Neuroshima Hex Puzzle there’s no AI, no big multi turn battle back and forth. Instead you’re given a setup and a certain number of pieces and tasked with figuring out how to save, kill or destroy whatever your target is in each setup. If you fail you can just try again with no real downtime. With 100 puzzles to solve it’s a game, that’ll take awhile to get through.

Approaching a game like this as a puzzle forces you to rethink the strategy you’ve been using in the standard game. You can’t brute force your way to victory or take your time waiting for the right moment to strike. It’s all about taking what you’re given and using the pieces in a very specific way. Like Angry Birds, they give you those particular birds to use in each level for a reason, and dissecting that and coming up with the solution is where the fun lies.

During my playtime with the regular Neuroshima Hex I was upset that there was no multiplayer options over the net, as it got boring to just constantly square off against the AI opponent. Neuroshima Hex Puzzle doesn’t solve that root issue of multiplayer, but it does give a kick to the sometimes boring nature of AI fights. It’s built to be entertaining as a single player experience, and it definitely succeeds in that capacity.

When I first started playing I couldn’t shake the feeling that this whole puzzle thing really wasn’t enough to be a game on its own. It really felt like it should’ve been a different mode in the regular Neuroshima Hex game, something that could have been added as a content update. After playing it for a while I’ll admit the play style is much different between the two, but with both games using the same assets and rulesets is just feels like a little bit of a scam to get you to pony up cash twice for the game.

The biggest downside to the game to me is that you kind of need to be familiar with the regular game to really get anything out of the puzzle version. Without the appreciation of the standard battle game, I think this puzzle version would just feel a little… light. It just feels like two sides of the same coin, and you really need one to appreciate the other.

I found myself drawn to Neuroshima Hex Puzzle, the same as I was to the regular game. There’s a deep level of variety there in unit types to fight with, and the puzzle element makes it easy to just pick up and play a fast level or two. It’s nice to know that there’s always a solution or way out of a jam, no matter how perilous the situation looks. I just kind of wish they added this to the original game and bumped the price up, since to really get an appreciation of what’s going on here you really need the complete package.