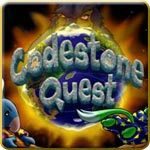 A Luxor-style game with a dash of Breakout isn’t likely to win awards for originality, but Neopets: Codestone Quest – based on the Neopets online virtual pet craze – goes to show that sometimes it’s just as much about fun, challenge and presentation.

If you aren’t among the 144 million people that currently have a Neopets account, an explanation is in order. Neopets is an online community where you can create and raise your very own virtual creatures, acquire items for them, take them on quests, and interact with other neopets in the virtual world of Neopia.

Codestone Quest takes place in Neopia as well, but something sinister is happening. A Lupe named Balthazar forges a pact with a mysterious figure and sets out to capture as many faeries as possible. He uses a charm to trap the faeries in bottles, and then he and his henchmen push the bottles towards his cart. It’s up to you, an apprentice alchemist, to free the captured fairies in exchange for their help in recovering the mystical codestones, which your master desires for one of his experiments.

Like Luxor, there are different colored objects (in this, case fairy bottles) snaking around the screen, and if they reach the end of their path (in this case, Balthazar’s cart), it’s Game Over. You can free the fairies in the jars by launching free fairies of the same color to form matches of three or more. However, instead of controlling a launcher that spins around, you move left and right across the bottom of the screen and launch the fairies directly upwards – this is where the Breakout influence comes in. You can use the right mouse button to cycle between three different fairies.

Making matches causes special coins called Dubloons to fall, and if you’re quick you can scoop them up. In between levels you can use the Dubloons to purchase petpets that serve as the game’s power-ups. (In Neopet lore, neopets can own pets called petpets – and petpets can own their own pets too that are called, you guessed it, petpetpets.)

You can only stockpile up to five petpets at a time, and they assist you temporarily when used. Snowsickle freezes all bottles on screen, Baby Fireball destroys a certain number of bottles, Blurtle slows down the movement of the bottles and Turmac pushes the bottles backwards.

In addition to the petpet power-ups, Codestone Quest has a unique magic system featuring five spells that can be unleashed by making matches in a specific color order. For example, the Color Blast spell which destroys all bottles of one color on-screen is triggered by making two yellow matches in a row, while Fireball is purple-green-purple, and the Targeting Beam (which helps you aim) is red-green.

Magic is an interesting concept, but I found it difficult to remember the combos that unlocked the various spells (aside from Color Blast, which I got fairly frequently mainly due to random chance.) As such, magic tended to be underused in favour of buying more petpet power-ups.

Adventure mode works very well. There are three levels of difficulty and seven distinct worlds to explore, including Terror Mountain, Lost Desert and Maraqua (an undersea region), with more than 70 levels in total. The graphics are colorful and detailed, and the bottles actually interact very closely with the scenery. For example, they’ll loop around the landscape going in and out of shadows and behind obstacles so that they’re temporarily unable to be matched. Their route sometimes takes them off-screen and back, and they’ll even get smaller and larger to give the impression they’re getting closer or farther away.

The instrumental soundtrack is great as well, and dynamically changes to get more agitated and urgent if you’re about to lose the level.

Once you unlock a level in Adventure mode, you can access it in Survival and Timed modes. A helpful character profile logs statistics like the percentage of the game you’ve completed, your accuracy with the fairy launcher, the largest and total number of combos and chains, the number of fairies you’ve freed, and any Achievements you’ve unlocked for reaching milestones like collecting 100 Dubloons or completing 5 levels without losing a life.

You don’t have to be a fan of Neopets to dive into Codestone Quest. Although it sure doesn’t hurt to be familiar with the brand, the game is more than capable of standing on its own as a great arcade game in its own right.