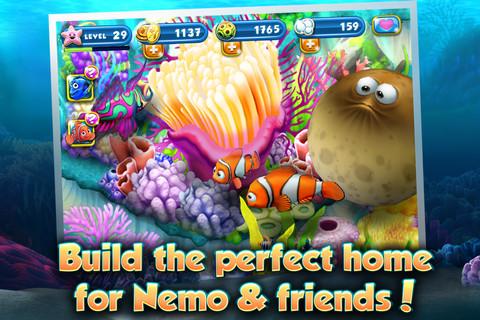 Despite some problems, it’s still worth taking a dip in Nemo’s Reef.

Pixar’s classic movie Finding Nemo brings to mind wide oceans, new friends, and seemingly hopeless quests fueled by love, hope, and determination. Unlike its source material, Nemo’s Reef isn’t about exploration or adventure—it’s about staying on one spot and making that spot pretty. This mobile game starring the little clownfish and his overprotective dad doesn’t boast an original premise, but it’s nice to lord over Nature for a change instead of yet another city.

Nemo’s Reef takes place sometime after Nemo’s big adventure. Nemo and his father are living together in a peaceful reef, and all is well. But then Nemo receives a school assignment that instructs him to build up his reef and attract rare forms of sea life. It’s pretty ambitious for a school project, but the boy-fish dives into it with enthusiasm, especially since he’s nursing an ongoing rivalry with a fellow schoolfish named Tad. Tad boasts that he can make a better reef than Nemo, and even though Nemo could put an end to that nonsense by saying, “Raise your fin if you’ve looked Death in the face and laughed,” he meekly accepts Tad’s challenge.

Nemo’s Reef plays like most city-building games, but instead of placing houses, roads, and buildings, you work with coral, seaweed, sunken treasure, and other delights that rest under da sea. You’re encouraged to buck order and symmetry in favor of Nature’s beautiful chaos; since there doesn’t need to be any rhyme or reason to how you arrange your plants and coral, you can slap them down almost anywhere and your reef will still look pretty over time.

That said, there are a couple of design rules worth following. If you surround your coral with different types of plants, you might attract certain rare fish. In fact, Nemo’s Reef has a host of guests that gradually move in across the course of the game thanks to sharks wreaking havoc across the rest of the ocean (so much for “Fish Are Friends, Not Food”).

You can convince the guests to stay if the conditions are right. For instance, a brown leafy seadragon makes her way to Nemo’s reef early on. The game suggests that seadragons are shy and like to camouflage themselves in seaweed that matches their color. You’re supposed to figure out that you need to grow some dark orange seaweed to make your new seadragon friend feel at home. If you manage that, the seadragon will stay. These interludes provide an interesting way to learn about undersea life. 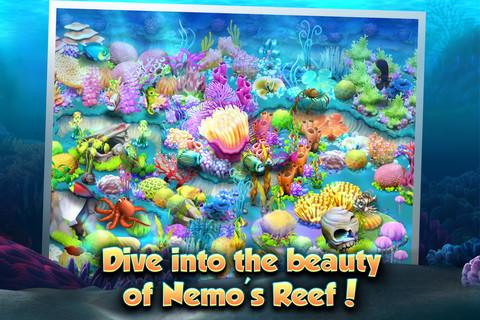 But when you break down the basic gameplay that drives Nemo’s Reef, you’re left with a title that still involves a lot of tapping, a lot of waiting, and a lot of suggestions to buy and spend premium currency. Fans of Finding Nemo might also be disappointed to learn that familiar faces show up—Dory the absent-minded fish, for example—but they don’t do much except swim around and look pretty. When there is character dialogue, it’s as dull as a catfish’s hide. It doesn’t help that the character models all have dead, expressionless eyes.

Nemo’s Reef is still a worthwhile download for fans of the movie, or for anyone who’s enthusiastic about underwater life. Just don’t expect anything as thrilling as weaving in and out of the jaws of a Great White.