Need for Speed Most Wanted Review 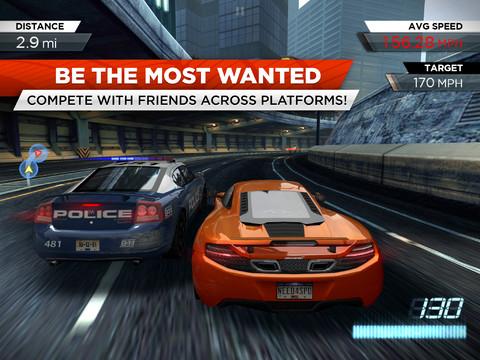 I wonder if the people from EA and Firemonkeys hang out and go camping and stuff. They must be close in some capacity, as Need For Speed: Most Wanted marks the fourth entry in the Need For Speed series that Firemonkeys has adapted for iOS. Just close your eyes and try to picture EA CEO John Riccitello walking hand-in-hand with a monkey engrossed in flames, both of them gazing upward at a beautiful sunset. Not so farfetched, right? Right?

Whatever their relationship may be, it’s clear us players are the true beneficiaries. Need For Speed: Most Wanted is Firemonkeys’ (a studio comprised of the former Firemint and Ironmonkey studios) best adaptation yet, offering up an experience that fits on mobile like a glove, yet captures the essence of what makes the Need For Speed series so darn fun. There are sacrifices that come with bringing a console game to mobile, of course, but the ones made here function more as strengths than weaknesses.

In particular, the simplified control scheme is perfect for phones and tablets. Your vehicle races forward all by itself, and left and right movement is entirely tilt-based. Drifting is done by holding your finger down on the right screen; braking is mapped to the left. If you want to give yourself a nitro boost (and why wouldn’t you?), you can do so by swiping on the screen. I have a rather passionate love/hate relationship with tilt controls (they’re frequently bad), but Most Wanted features some of the best I’ve ever encountered. They’re refined to near-perfection, with a very slight movement of the device required to turn in any given direction. Having frequently spiraled out of control in racing games with over-sensitive tilt schemes, I was elated by how they function here.

The option to switch to touch controls is available, but I never had any luck getting them to work properly. Despite moving the sensitivity up and down the scale, I typically crashed into a wall about 20 times per race when I used them. My poor, beautiful cars.

The other notable change in the iOS version is the lack of an open world structure. While you have the ability to traverse a living, breathing world in Most Wanted for consoles, the gameplay is relegated exclusively to missions here. Again, that difference is probably for the best. It makes starting up a race a quick and easy task, and it’s just as possible to play in three minute spurts as it is for extended periods. And with a variety of mission types to choose from, the game never feels repetitive or monotonous. You’ll engage in typical races, but you’ll also have to race the timer in other levels, or go 1-on-1 against someone higher up on the “Most Wanted” list than you. All of these things are straightforward at first, but the difficulty ramps up quite a bit near the end of the game.

Most Wanted‘s difficulty is comprised of a few different elements. For starters, cops are constantly trying to rail you against a wall or take you out of commission. There’s also the issue of the ever-increasing difficulty curve, and the subsequent rise in performance from opponents. You may be racing a bunch of dummies at first, but you’ll be pitted against some pretty powerful opponents later on. Not only will you have to keep up with them on the race course, but you’ll have to try and retain some degree of parity in terms of car power. 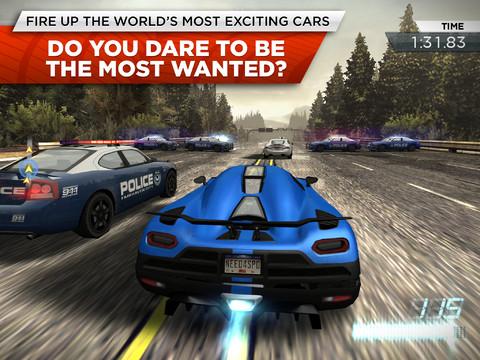 And oh, how many cars there are. Common of the Need For Speed series, there’s a cavalcade of licensed vehicles for you to choose from – provided you have the money to afford them. It’s not that big of an issue, considering the healthy chunk of cash you earn at the end of each race, but there are still quite a few top-shelf gems you’ll be forced to save up for. And with the occasional need to buy different types of vehicles for different races – SUV, etc. – you may be stuck window shopping for longer than you wish. The option exists to purchase in-app currency with real money, but I never felt desperate enough to do so. That’s primarily because I just gazed at the cars I couldn’t afford and cried until I couldn’t feel anything. Because that’s what men do.

In most instances it’s unfair to compare graphics between mobile and console versions, but not so much with Most Wanted. It’s not quite equal, to be sure, but Firemonkeys has done an incredible job with the visuals, just as Firemint did with the Real Racing series in the past. This is especially true of the individual cars, which feature all the detail and drool-worthy appeal of their real-life counterparts.

And if driving an awesome vehicle isn’t cool enough for you, there’s also the option to add various mods to your car at the beginning of each race. Some of them boost your speed in different ways, while others make your car a little more durable. I tended to stick to the speed enhancers at most times, but that’s because I’m a (w)reckless speed demon with no regard for virtual driving laws. 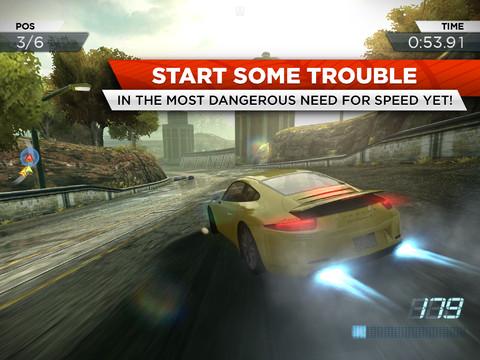 As you can tell, there’s a lot to love about Most Wanted. In fact, the only real issue I had with the game was the lack of real multiplayer. You can compete against your friends’ times in any given level, but that’s it. Perhaps worse, all of this is done through EA’s Origin service, forcing you to sign in before adding any friends to your list. It’s cumbersome, but it comes with some unique advantages: Because Origin is a platform-agnostic service, you’ll be able to see your friends’ times no matter what they’re playing on. Potentially nifty, but not for everyone.

But that’s a single bad drop in what is otherwise a massive bucket of awesome. Need For Speed: Most Wanted is one of the best racing games available on iOS, rivaled only by Firemint’s own Real Racing series. EA did the right thing by handing Firemonkeys the keys to their beloved series, and I wouldn’t be surprised to see them handling any and all future mobile ports. Or, put another way, I desperately hope they’re tasked with adapting them. Until then, I’ll be playing Most Wanted ad nauseum, destroying cops and laughing quietly to myself.