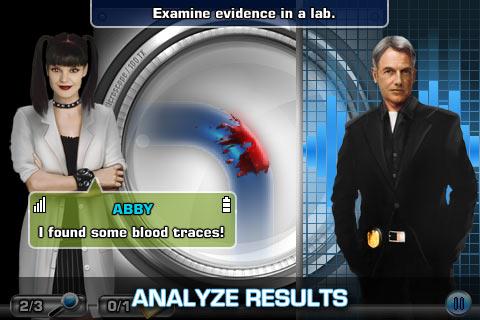 The NCIS television series managed to put a twist on the traditional crime drama by focusing on the US Navy and Marine corps. It’s still a crime drama, but with a military setting. The iPhone game, meanwhile, takes the series and turns it into a hybrid between a hidden object game and a mini-game collection. It captures the spirit of the series, but it’s far too short and far too easy to recommend to anyone but fans of the TV show.

In keeping with its television roots, NCIS the game is divided into a series of five episodes. Each tackles a different crime, ranging from hazing right up to murder, and there’s no real continuity so you can tackle them in any order you want. Fans will be greeted with a familiar cast of characters, and the writing and dialog is actually pretty good. The constant joking around provides a nice contrast to the grim crimes you’ll be investigating. Unfortunately, you can complete each episode in the game in about the same amount of time it takes to watch an episode of the TV show. And since there’s only five episodes, this means it doesn’t take long to play through everything.

The game itself is split largely between interviewing other characters and investigating crime scenes. Interrogating witnesses and suspects involves choosing the right responses in an attempt to push them towards revealing information. You’ll be given four different options, so you can either choose to approach the discussion by being friendly, neutral, aggressive, or by presenting evidence. Depending on the character’s reaction, a bar at the top of the screen will either fill up or empty. And once the bar is filled they’ll tell you what you need to know. The problem with this system is that there really is no penalty for making a mistake. If a choice causes the bar to go down, you can simply just re-do the last action to bring it back up and then try again.

You’ll also be investigating crime scenes, which plays out much like a very simple HOG. Most scenes only have a handful of things to find, and since the scenes are all pretty small, it won’t take long to find everything. If you do struggle a bit, the game will highlight areas of interest to help you move along. At all times you’ll have a list of both your goals and the items you’ll need to find, though much of the time these two lists overlap quite a bit. There’s also the occasional mini-game that will have you doing things like analyzing evidence under a microscope or going out on a stakeout. You’ll be graded at the end of each level based on your performance, which does lend some replayability to the game. But since the episodes are so easy chances are you won’t be getting too many low scores. 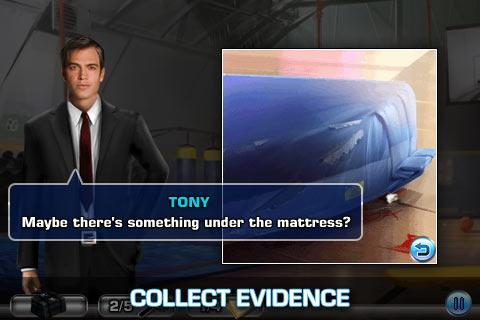 NCIS is about exactly what you would expect from a licensed game on a mobile phone. It’s quick, easy, and simple. It does manage to capture the look and feel of the show, but there isn’t enough of a game to attract those who aren’t already fans. But if you simply can’t get enough of Gibbs and his team, this is a great way to get a quick dose of crime drama on the go.