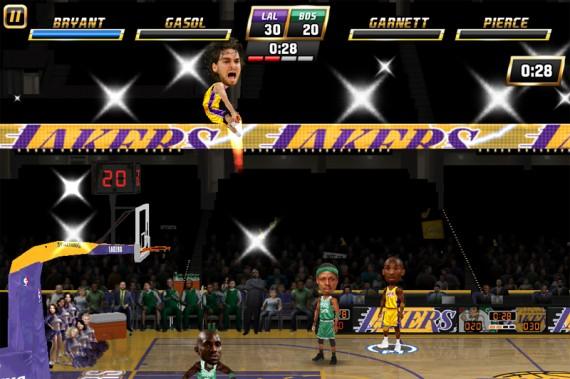 NBA Jam on the iPhone is a slam dunk

As a child of the arcade scene, I have much more than a passing familiarity with the NBA Jam franchise. Heavily steeped in lore and nostalgia, one could say I loved playing that game 25 cents at a time. Suffice to say I’m not one to tolerate a game showing up on my iPhone that’s NBA Jam in name only and little else. Luckily, EA has surpassed the high bar I personally set for this title, delivering the real deal experience to my handheld.

NBA Jam has always really revolved around the same central idea: combine crazy ridiculous nonsense and basketball. What you end up with the a game that’s a 2-on-2 end to end dunk fest with nets catching on fire and players being shoved left and right. Play your cards right and wacky cameos like Bill Clinton might even show up and dunk on the Phoenix Suns mascot because, hey, why not? Just to be clear, I’m totally ok with this. This is how I like my sports games: over exaggerated and fun. 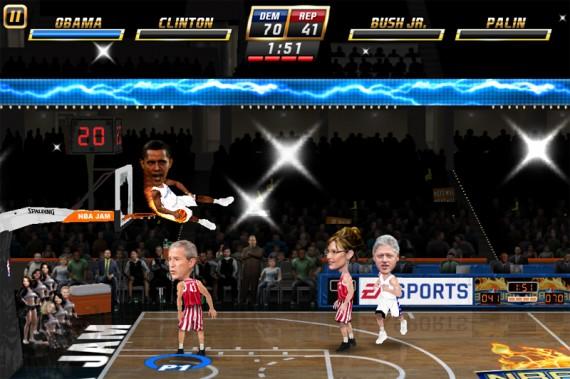 As mentioned, the game is 2 on 2 basketball with super simple controls. At any time you’ll have access to boost, pass, and shoot buttons. In a nice consideration to the touch screen controls, you can roll your finger from boost to shoot or boost to pass to initiate the command. This is much nicer than having to release and tap the button independently.

The game starts by giving you access to every NBA team and a few current players off each of their rosters. As a great callback to old fans like me, there are a bunch of old players that you can unlock by playing the game. I’d love to just be able to pick Dr. J from the get go, but if I want to unlock everything it’s going to take a good amount of time. If you’re lazy or pressed for time, EA gives you the option to unlock all of that stuff through an in-app purchase.

I was so pleased to find that the core experience of the game is still there, big heads and all. You know instantly that this is an NBA Jam game, and it doesn’t give you any reason to doubt its right to the throne left by the arcade classic. EA Mobile has really been firing on all cylinders lately, and NBA Jam is just another excellent piece to their puzzle.

It’s amazing to think that nearly 20 years ago I traveled by bike, bus, and car to the local mall just to pour dollar after dollar into an NBA Jam machine that took up a huge amount of floor space – and now that game has been upgraded and put in my pocket on something the thickness of a few credit cards, controlled only by my fingers sliding across glass. My, how far we’ve come.