Natalie Brooks – The Treasures of the Lost Kingdom Review 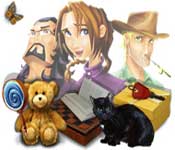 Marc Saltzman in his review of Nightshift Legacy: The Jaguar’s Eye believes 2008 will go down as the year of the “HOG” as in hidden object games. But I think it would be the year HOGs shun the HOG label for point-and-click adventures like in the old PC days.

Natalie Brooks: The Treasures of the Lost Kingdom puts a greater emphasis on adventure and less on hidden object finding. Natalie Brooks returns for another adventure that isn’t unlike others we’ve seen in this genre. Grandpa is lost or kidnapped (in this case, kidnapped) and the hero must search for something in order to get Grandpa back. Though the story sounds clichéd, it integrates well with the game play.

Natalie has three days – in order to save her historian and scientist grandfather — to find an old treasure map, find the treasure, avoid a curse and discover secrets involving a president and ghost train. The game tells the story through comic panels between chapters and in conversations during play. Some game struggle to help the gamer stay on track with the story or keep it simple enough so it’s not lost between game play.

Despite an absorbing and easy to follow tale, the many typos and grammar errors needlessly dampened the enjoyment. At the beginning of the story, Natalie says, “I got a call from a stranger who demanded that I brought him the map …” and later she reports that someone “left the map with its coordinated to his descendants…”. A few typos provide comic relief including “wich me luck” and “Scueak” (squeak). The game manages to misspell the last name of character Geoffrey Evans (no relation) to Evens (a fate I suffer many times). The original Natalie Brooks suffers the same fate, so it’s disappointing this one doesn’t do a better job with spelling and grammar.

The list of hidden items intermingles with the story line. Sometimes Natalie needs to find various objects to help her get to the next step or to add to her inventory for a later puzzle. When find all items, the game gives you a stamp of “success.” When you finish a mini-game, it says “Congratulations, you won!” It’s a little much to get congrats after cleaning a key and doing other little things. Really, this would be better for the end of the game rather for completing a mini-game. Minor quibble, but bothersome nonetheless.

The graphics remain as sharp as ever. Although sometimes the characters appear in a 3D-style graphic, which makes them look floppy and sulky. The cartoon-style graphic works and that would’ve been good enough instead of 3D images. The upbeat music provides perfect background music.

Natalie Brooks: The Treasures of Lost Kingdom doesn’t introduce anything new over the original other than a different storyline and different tasks. However, these alone make the game worth playing until the end. The diary that appears between chapters has amazing pencil drawings reflecting on the events of the chapter.

Players can skip puzzles if they don’t like it or become frustrated with it. So that would be the only reason to replay the game – to play those skipped puzzles. But the neat thing about the puzzles and mini-games is that no two are alike. Not even a memory game that grows harder by adding more cards.

As for the hint system, you have unlimited hints as long as the hint button is full. After using a hint, it has to refill before you can use it again. This may be too lenient, but players can decide if they want to use it or challenge themselves. Experienced players may not feel challenged for most of the game. The unique and interactive puzzles will immerse players of all levels.

The game contains 13 chapters and each with two parts. It’s not the longest game in the genre, but a comfortable length that lasts around six to eight hours. Unlike the previous Natalie Brooks, The Treasures of Lost Kingdom ends nicely and feels satisfying.