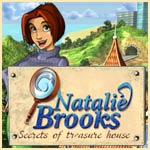 Natalie Brooks – Secrets of Treasure House brings to life the story of a young woman who has inherited her grandmother’s house. Join Natalie on a journey to unravel the mystery of the house and find the treasure contained therein. Meet a series of characters along the way that can help you discover the secrets, though beware – not everyone has Natalie’s best interest at heart. Act fast, because the city has plans to build a road right through the property!

Similar in some ways to the hugely popular games like Azada and Dream Chronicles, this adventure mystery puzzler is graced with beautiful graphics and an immersive storyline. Bringing together several popular genres, Natalie Brooks – Secrets of Treasure House offers something for almost every gaming taste, whether you enjoy hidden objects, logic puzzles, jigsaw puzzles, adventure, or mystery.

The story line unfolds via a series of comic strip screens and also through the interaction between Natalie and the characters she encounters on her quest. I found the tale very intriguing from the search for the hidden treasure to the revelations about the other character’s hidden motives. The tale was engrossing enough to make me want to keep playing just to see what happened, though it could have been enhanced with a clearer translation of the text into English. The ending was rather abrupt and left me scratching my head a bit. Several things were alluded to in the story but never explained or finished before the game ended.

Each "level" consists of a scene in which you use the mouse to interact with the objects. Clicking on an object can add the item to your inventory for later use, cause Natalie to give you a hint about it, or add important information to your notebook. At times you will need to use the items you’ve picked up to interact with other objects on the screen. For instance, in one level you need to locate and collect some batteries that are scattered around the room. Once you’ve collected them, you can use the batteries to activate a robot that will then lead to another clue. You are also given a magnifying glass that is quite useful when you need to look at an item for a closer inspection.

The main drawback of this game for me was the poor language in the text. It’s doubtful that English is the primary language of the developers. The grammar and spelling errors detracted from the flow of the story – especially during the dialogue between characters – and also presented certain unnecessary challenges within the hidden object mini puzzles. When marketing to a primarily English speaking audience, it would behoove the developer to invest in decent translations!

The hidden object puzzles available in every scenario can be played to acquire extra hints to help Natalie during the Azada-style point-and-click portions of the game. Although not nearly as challenging as stand-alone hidden object games, I found these puzzles to have just the right amount of difficulty to be enjoyable yet not frustrating. I did have trouble locating some of the items, as I was unfamiliar with some of the terms used, such as an "airscrew" and a "tase". The latter might have been a typo, as I found quite a few spelling errors along the way. (Perhaps they meant vase? Taser? Who knows!)

A wide array of mini puzzles are found throughout the game. Many of these are based on classic logic puzzles such as a version of Simon Says in which you need to reproduce the sequence shown by clicking on the images in the correct order. Other challenges included a jigsaw puzzle, a memory game, even arcade style games like the one in which you have to move a platform to guide bouncing coins across the screen and into a coin slot. One of my favorites was a short, easy game in which you have to throw rocks to break a window – satisfying and fun! The mini games were not very challenging, but the variety and unique styles (of some of them) were quite interesting.

I did not find this game to be difficult at all, as there are plenty of hints available throughout all of the scenarios. Most often, talking to other characters or even clicking on the items in the scene will reveal enough information about the puzzles that using the hints wasn’t even necessary.

I was not able to finish the game in a single sitting – that is a huge bonus in my opinion. The game moves at a decent pace and the multi-layered storyline keeps up nicely, which really helps to hold one’s interest. I was as eager to see what happened next in the tale as I was to uncover the next puzzle to play.

The game controls were easy to learn and work with. Simply click and go! Not a lot of mystery there, which allows you to focus on the puzzles and not be distracted with trying to figure out how to work the user interface.

The scenario graphics are very good, clear and engaging. This helped tremendously in the hidden object sections and the main scene puzzles are made easier by the addition of "mouse over" hints. (simply move the mouse around the screen and a small text pop up will alert you to important items) A calm soundtrack adds to the ambiance of the game, neither distracting from nor overpowering the game play.

Overall, I found Natalie Brooks – Secret of Treasure House to be a very enjoyable game that artfully blended many popular genres with a great story. Although I would consider the game almost too easy for more serious players, the length and storyline made up for that.

If you can’t stand hidden object puzzles and have no patience for logic puzzles, this is not the game for you. However, if you’re looking for a game that will last more than an hour and grab your attention with an intriguing story, then I definitely recommend downloading the demo.

Spirit of Wandering: The Legend Review