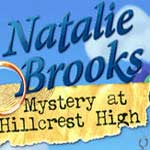 Natalie Brooks: Mystery at Hillcrest High is a fine video game example of the Nancy Drew tradition of female super-sleuthing. As Natalie, you’ll hunt for hidden objects, play mini-games, and solve point-and-click adventure puzzles in order to prevent a kidnapping case from turning into a murder mystery. Mystery at Hillcrest High is no taut thriller, though, instead sending the feisty heroine through a gauntlet of devious puzzles and ludicrous challenges with tongue planted firmly in cheek.

The story begins because Natalie is unable to check her mail without a case falling into her lap. A curious letter reveals a secret message hidden in invisible ink: her friend Chad is in terrible danger (in a way that involves being locked in a high school basement). Further investigation reveals another friend, Kitty, whose life is also threatened by a hidden message in a portrait Chad painted of her. Digging through the game’s puzzles reveals a tangled web of greed, deception, and teddy bears stuffed with dynamite.

Mystery at Hillcrest High plays, for the most part, like a standard hidden object adventure game. You help Natalie find information, escape dire peril, or chase down bad guys by finding objects and solving puzzles with them. Sometimes this means repairing busted machines or building hilarious Rube Goldberg devices. Other mysteries are best solved by ferreting specific objects out of the game’s gorgeous but very busy backgrounds.

Players returning from the previous Natalie Brooks games may be surprised by just how much the production values and localization have improved. The spelling and grammar errors that severely marred earlier games in the series are almost gone now. The character art is very appealing in the Flash cartoon cutscenes, while the 3D objects make for some of the game’s most memorable puzzles. The 3D characters still aren’t very attractive, but appear in a satisfying puzzle in the game’s final chapters that wouldn’t have been possible otherwise.

Like most modern adventure games, Mystery at Hillcrest High uses a hint system. You can get unlimited hints, but the hint mechanic is tied to a timer. If the game has noticed you really flogging the hint button to figure out what to do, then the timer will begin refilling more slowly. This gives you some time where you’ve got no choice but to click around the screen and try a few things out. This can produce some very satisfying epiphanies without constantly abandoning players in situations where they might get stuck.

Natalie gets to play mini-games after solving certain major puzzles. If you start struggling, you can opt to skip the puzzle, but generally you won’t want to. The mini-games are quite well-done, asking you to solve logic puzzles, go fishing, or even play arcade-style games like steering a boat through a twisty channel. Some of the mini-games feature 2D Flash-like graphics while others let you manipulate 3D objects. The game’s best mini-games make for a refreshing change of pace after long minutes spent squinting at the screen.

While Mystery at Hillcrest High is much improved, some flaws keep it from being a truly fantastic experience.  The game’s hint system becomes buggy in certain levels, especially if you start solving puzzles outside of the plot’s intended sequence. When the hint system bugs out, it stops giving you useful information. Instead it will endlessly direct you to other locations or, even worse, to a single useless one. Some puzzles are frustrating in ways the hint system can’t really address, including a particularly awful one that involves getting Morse code information from a ship.

The full version of Natalie Brooks: Mystery at Hillcrest High sprawls over ten chapters, which should each take around thirty minutes to complete. The twists, turns, and complicated puzzle-solving make it a satisfying download for any player who is inclined to enjoy object hunting or Nancy Drew-style super-sleuthing.  Be warned, though, that Mystery at Hillcrest High has absolutely no replay value. Solving the mystery is lots of fun, but once you’ve beaten it there’s no reason to play the game again. You’ll probably find yourself yearning for Natalie’s next adventure instead.