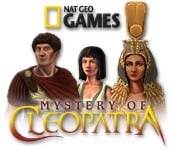 Imagine Mystery of Cleopatra as an Agatha Christie murder mystery that takes place at Cleo’s palace during her reign. Instead of playing Hercule Poirot or Jane Marple, you’re the queen’s trusted advisor who investigates the murder of a Roman solider by piecing together hidden objects and masterminding puzzles. This is the second game from National Geographic and Merscom following Lost City of Z that shows no improvement over its predecessor.

As you work through the case, you’ll be immersed in the culture of ancient Egypt, both in the scenes themselves and the encyclopedia-like text entries that share the history behind the places you investigate. Your heavy-duty reading homework not only includes all the history lessons, but also dialogue between characters, and scrolls with stories of their own.

The game opens with you looking for all the parts of your outfit to put it together and get dressed for your meeting with the queen. You’ll work your way through the investigation by hunting for clues and evidence and talking with the characters. When something stumps you, hints are available on a "fill up" basis. After using one, the hint meter must refill before it’s available again.

Some items — highlighted in yellow — require doing something else first before you can access them. You may not notice because the game feels scattered. Sometimes you put items together in your inventory or on the scene. Other times you’ll take evidence from your inventory and connect it with an area on the scene to show proof. Objects and edges of the screen occasionally sparkle so you know you can go in that direction or look inside.

Scenes lead to mini-games such as having to fix the thingamajing to open a door, move logs to reach a needed item or weigh masks to pick out the heaviest one. Hints go away during the mini-games, so your choices are to review the rules — which aren’t always clear — or skip the puzzle. At least there’s some originality in that no two mini-games are alike. In one puzzle, you move the rings of a bell to make it match a pattern. In another, you rely on logic to place the scrolls in the right spot based on the given rules.

Despite the lovely attention to detail in the graphics, the text and object design needs more attention. Some objects blend too much with the background that you can’t see them even after the hint tells you where they hide. National Geographic pops in with its encyclopedia style entries on Alexandria, History Donations of Alexandria and Octavian to name a handful. With a lot of text to read and some of it hard to see, you’ll probably skim or skip a lot of the text unless you’re a history buff.

The game leans toward the short side, but in this case that’s a good thing. Mystery of Cleopatra has the base for a strong game, but its lack of cohesion and sometimes tedious gameplay put a damper on the fun factor.