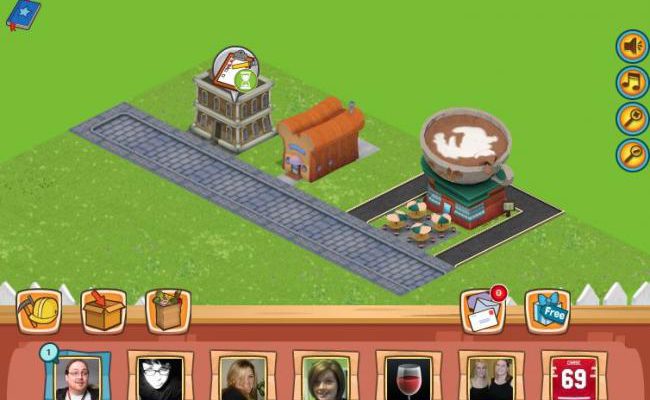 Digital Chocolate’s NanoTowns is the latest Facebook game to let players try their hand at city planning by giving them a little patch of green space with orders to go forth and transform it into a thriving mini-metropolis. With cash, time, or a combination of both you can do just that – to a point.

NanoTowns‘ presentation and gameplay is fairly typical of these kinds of Facebook games. Through a menu-driven interface you can select from a variety of buildings to place onto your grid. These fall into two basic categories: shops and service buildings that produce goods (su­ch as cafes, donut shops,

restaurants, libraries and pet stores) and a variety of residential dwellings such as apartments and cottages.

Many, though not all, of the commercial buildings have something they can produce. The library, for example, issues library cards, the donut shop creates (what else?) donuts, the Italian restaurant serves salad and pasta, and the cafe produces coffee and cookies. 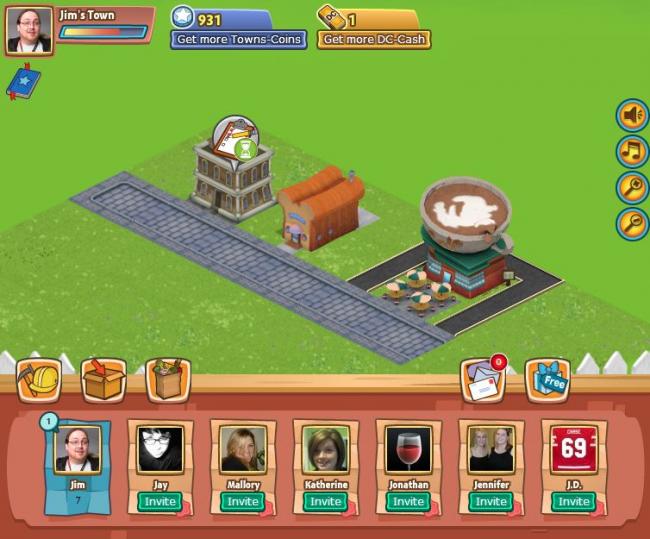 New types of buildings become available to build as you level up in the game, which you do by completing quests that pop up randomly from the people in your buildings. For example, the residents of the brownstone house might ask for coffee and cake, which must be produced at the cafe and bakery, respectively, gathered into your inventory, then given away, all with a few mouse clicks.

Constructing buildings and producing goods take a certain amount of real time to complete (in some cases, upwards of 24 actual hours), and that’s where the game tries to entice you into shelling out small amounts of real-world cash to speed up the process. There are two types of in-game currency: Town Coins can either be purchased with real-world cash or earned back in the game (albeit at a very slow rate) by selling goods, completing quests or clicking on coins when they appear above buildings every five minutes or so.

The second type of currency, DC-Cash, can only be purchased via credit card, Paypal or the Boku mobile payment platform. If you don’t feel like waiting the necessary minutes or hours for a building or item to be created, you can pony up some Town-Coins and select the “Insta-Build” option. Certain buildings and Insta-Builds, however, can only be purchased with the micro-transaction-driven DC-Cash. 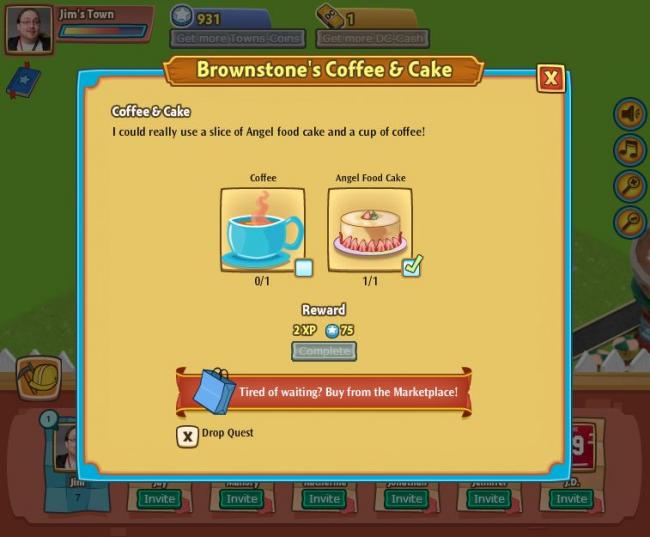 Buildings will be more productive if you add a worker, which you get to choose from among your actual Facebook friends. You can definitely have some fun with this: for example, I put my friend Jason in charge of my bakery since he makes a wicked chocolate chip cookie in real life. You can notify your friend through a Facebook wall post that you’ve done this – or not. The game doesn’t force you to spam anyone.

In terms of NanoTowns‘ other social features, you can brag each time you gain a level by publishing a story in your friend feed (again, or not… it’s up to you), visit friends’ towns and click on buildings to collect extra coins, and send friends gifts to help them complete their quests. There’s also an in-game email system, which is presumably to ask friends to make items for you, since there’s no way of telling which quests a given friend is working on simply by visiting their town.

NanoTowns is still a relatively new title and it seems obvious that it has yet to really hit its stride. The graphics are decent, but the cities themselves are like ghost towns, lacking the animation and small details – the bustling factories, the pedestrians strolling up and down the thoroughfares – that really bring other games (like Social City) to life. Save for cars that putter up and down the road (if you buy them first), your NanoTowns city will be depressingly devoid of life and movement.

Placing roads is a clunky process that involves having to buy individual sections, setting them down, and rotating them into the right direction. (Again, we don’t want to spend our entire review comparing one game to another, but we much preferred the road-building system in Social City where roads were free and would morph into whichever shape you needed simply by dragging your mouse in a line.) 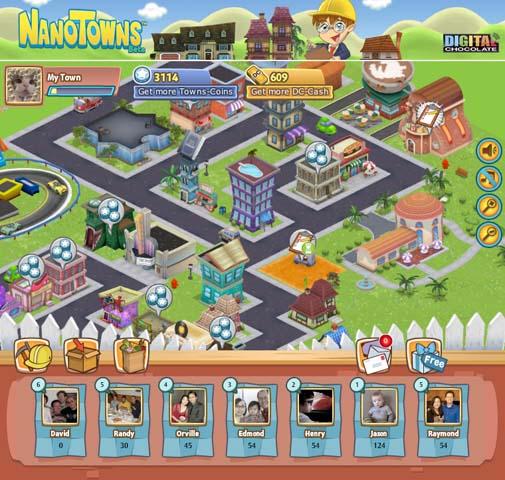 Another issue is that there’s not much in the way of in-game help to explain exactly what the various buildings do. For example, what, we wondered what the advantage was of building a cottage instead of an apartment or cabin beyond aesthetics. Disappointingly, too, not every building produces anything, which is something you don’t find out until you’ve already bought it. Given how expensive some of the buildings are, it would have been nice to know in advance that the Pho3000 restaurant and farm seem purely decorative.

There’s also no icon to tell you that a given building is in the middle of producing something. You have to keep clicking on individual buildings to see if a good is in progress. Icons do pop up above buildings to indicate that a quest is in progress, so surely a second icon to indicate if something was being made there wouldn’t be too difficult.

Whether it’s the un-interactive nature of the town itself, the shallow pool of quests that repeat too often, or the other small hiccups that make the game a bit of a chore to navigate, it’s clear that NanoTowns still has some growing to do before it hits on that elusive combination of features that compels players to put down more permanent roots.