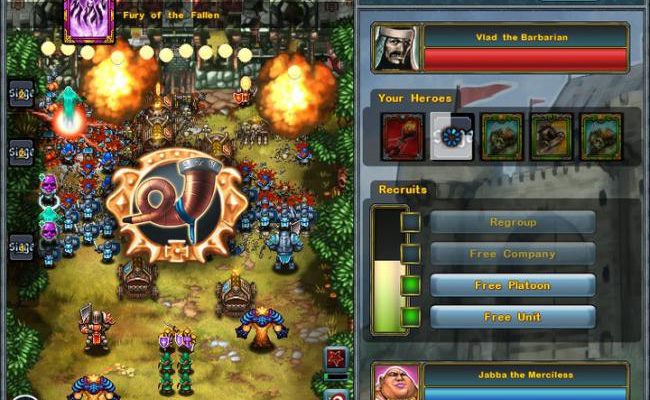 When I think of deep strategy experiences, the word Facebook doesn’t really come to mind. It’s not that the two wouldn’t be a great fit – patience-heavy gameplay and multiplayer experiences are hallmarks of both – it’s just that we’ve never really seen the two combined with much success. Digital Chocolate is looking to change all that with NanoStar Siege, a surprisingly deep strategy game that’s easy enough to learn and nearly impossible to stop playing.

On some level, the structure of NanoStar Siege seems rooted combat elements made popular by Facebook RPG’s like Mafia Wars or Gangster City. You’ll examine a list of other players, pick an opponent based on their stats, and go to war. The difference here? That war is fought in real time, with an army hand-picked and placed into battle by you.

Slayers, swordsmen and archers are at your disposal as you attempt to build the best army possible to raid the opposing player’s castle. Each unit has its own strengths and weaknesses, and depending on the opposition’s formation you’ll want to maneuver your troops into the most strategic positions possible. Archers hiding behind other troops can rain arrows on the opposition, for example, while an undefended section of the field would be a great place to send your heavy duty slayers to take out the enemy castle. 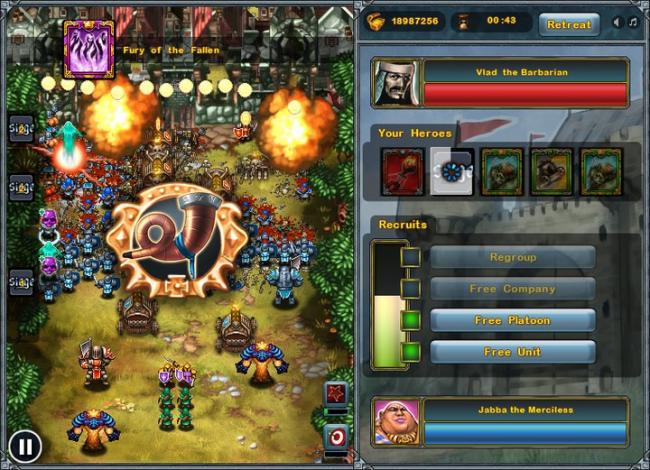 In addition to troops you’ll also have an assortment of “heroes” that you can call into the battlefield. These heroes come in the form of cards, which make up the heart of the NanoStar experience. NanoStar isn’t one game, but potentially a whole universe of games. Players will collect digital cards featuring heroes that they can bring with them to a variety of games. The cards will have different effects depending on the game you’re playing. At the moment there are only two games in the NanoStar universe, this and NanoStar Castles, but we hope to see more.

The heroes in Siege offer up a wide variety of battlefield effects. You can use them to modify the performance of your troops, create new units, and reign down terror on the opposing army. With a wide variety of heroes available, expect to see a fantastic array of animations on the battlefield. Hellhounds ravage enemy lines, harpies swoop in from above – it’s enough to send the opposing team crying home to mommy. And if you’re dying to see more you can always unlock additional cards by purchasing booster packs with real world money, just like a real customizable card game.

Economics plays a large factor in the strategies you’ll use in NanoStar Siege. When going in to battle you’ll need to spend a certain amount of money to begin the match. The amount you’ll spend is directly attributed to how many units you’re committing to battle. Placing a dozen troops might be enough to triumph over any enemy, but if the cost to deploy is greater than the reward you’ll earn at the end you’re going to run out of gold awfully quickly. Picking only the troops you need can be a difficult challenge, but it only adds to the deep strategy elements running through this game.

Siege is about more than raiding other people’s castles – it’s about protecting your own, too. The multiplayer in NanoStar Siege is asynchronous, meaning you’re facing off against AI opponents rather than a real live player. Fear not though – that real live player can set up strategies for his defense and you can too. Select which units should defend you, determine their placement, build up fortifications and choose from a slew of heroes for protection. No two defences ever need be alike.

While there may not actually be anyone human behind the wheel when you’re raiding a castle, you’d better believe that the forces you’re fighting are the direct result of player design. The tide of battle can turn pretty quickly in Siege – even if you’re thumping the opposition for most of the match, there are no guarantees when tangling with foes a level or two above you.

The strategy, the action, the detailed visuals – it’s like nothing we’ve ever seen before on Facebook. NanoStar Siege isn’t just a brilliant strategy game, it’s a brilliant strategy game that’s accessible to everyone. Facebook gamers who’ve never dabbled in something deeper will find a lot to love in this title, and traditional gamers who normally shy away from Facebook will have a reason to dive right in. Get ready – you’re about to do battle in one of the most unique and engaging games on Facebook.